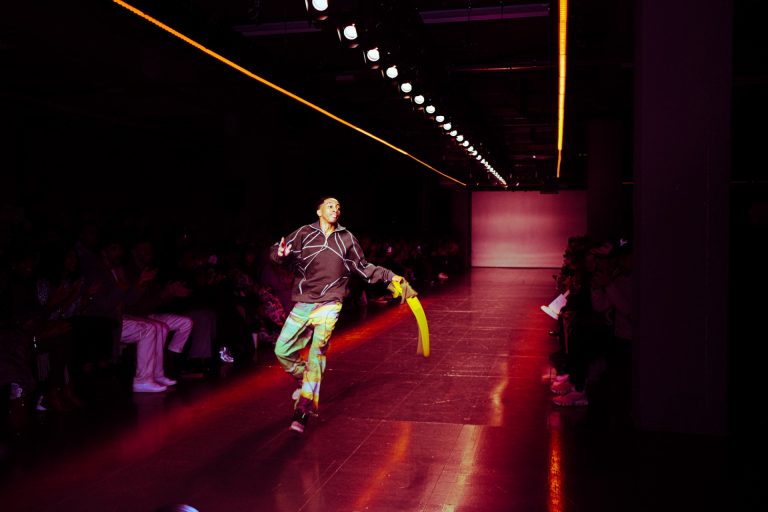 Saul Nash has been a sportswear’s rising star ever since he debuted his collection at the Fashion East’s talent incubator. Going solo last year, he proved that he’s got everything it takes to step the game up to the next level and score big. For this season as a part of London Fashion Week, he presented a complex, detailed-to-perfection, experience consisting of a short film and catwalk show featuring a dance performance.

“I was born in London to a Bajan-born Guyanese mother, and it’s always interested me how much I was immersed in these cultures in a place so far away from them. Spirituality was everywhere at home, and stories of ancestors and superstitions would set my imagination running. RITUAL is about what these ideas mean to me today, in 21st century London,” says Saul.

Exploring the Afro-Caribbean culture and folklore, that’s been a running theme in his up-to-date work, he took us on a spiritual journey, inspired by the ancestor’s stories and locals that he’s been surrounded by since childhood. The video, shot by Fx Goby at Gee’s Barber pays homage to one of London’s first black barbers, Gee Artery. Through the body movements and clothing, he translates nostalgia of the moment from the modern age perspective.

Creating a common ground for his ever-evolving concept of menswear, he presented suit cut from combat wool with slim lapels, press-stud fastening and recycled power-mesh beneath. A finalist for the 2022 International Woolmark Prize, he showed off his master tailoring meeting the need for comfort and durability. Quite a satisfying combo.

The most eye-catching piece was a two-piece zip-up with a water-spirit in the shape of a mermaid imprinted in red on white material. Deeply rooted in African, Caribbean and Latin American tradition, it’s edge-cutting contemporary in its form. Nash didn’t shy away from bold colours, either if it was an all-red silhouette or a tracksuit with matching gloves in the earthy shades of green and yellow.

Saul Nash’s ‘Ritual’ tells a tale that deserves recognition in the modern-day, teaching us about the importance of honouring and celebrating one’s heritage that lives in the local communities who echo their lineage.