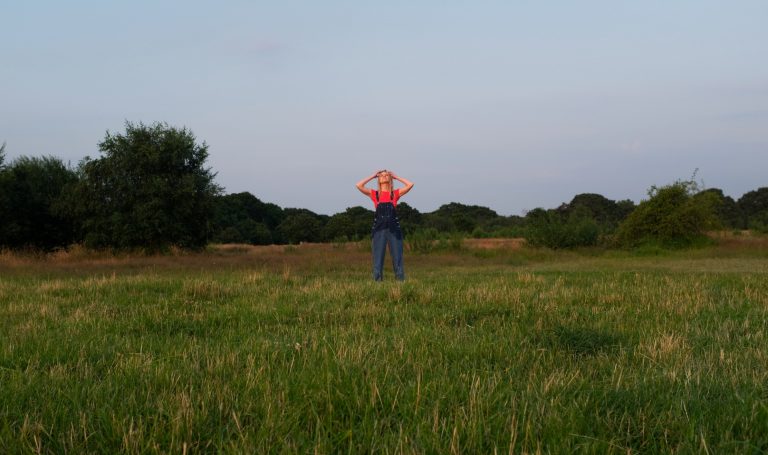 Some of you might recognise Áine Rose Daly from her role as Sandy Phillips in the popular Prime series HANNA. However, with the release of her debut single ‘Miles’ last year, she showcased her broad, creative abilities and above all an exciting, natural ability as a songwriter. Now the artist returns with an enthralling music video that accompanies her sophomore single ‘Places’, premiering today. It’s a deeply personal track that tells a story around Áine’s past battles with mental health, along with its all-encompassing and confining nature. Drawing on the youthful sounds of alt-pop, the songs minimal acoustic production perfectly highlights the artists true strength – a voice that’s not only powerful but also one that exudes endless emotion.

The story behind ‘Places’ is visually told in a way that perfectly encapsulates the artists challenges with anxiety disorder. Directed by Jordan Cox, we see the artist sat on her bed whilst the room fills up with water to create an eery feeling of entrapment. The journey takes you from her very lowest point to the moment she eventually breaks free from her demons. It’s a rather unique final outcome that shows Áine’s ability to entertain whilst appearing totally relatable. Ahead of the release of the music video, we caught up with the artist to learn all about her glistening journey into the music world.

Hey Áine! Thanks for taking the time to speak to us today. How did your creative journey lead you into the music industry?

I’ve been involved in music from a really young age, but back then it was mainly just performing other people’s songs or musical theatre stuff. I only really started writing my own stuff when I was about 17 or so. I guess when you’re that age emotions are super intense and so that kicked started my need to write, just to get all that stuff out.

In recent years you’ve built a rather successful acting career, most recently as Sandy Phillips in HANNA. How do the aspects of acting and music compare in your life?

For me, acting and music feel very far apart from each other. I have a lot more confidence when it comes to acting. Maybe that’s just due to having more experience in that area but it definitely comes easier than the music stuff. I’ve had to work a lot on building my confidence up surrounding my own music. It’s always been a massive part of my life but for some reason it feels harder to share that. It’s so personal and makes you feel on display in a way that I never experience with acting. It’s always been a toss up for me on whether I wanted to pursue acting or music but every time I would focus too much on one, I would miss the other. I feel like I need them both in the forefront of my life as that’s when I’m happiest, so here I am, trying to do both and I don’t see myself ever stopping either.

Your latest single ‘Places’ is an alt-pop offering that’s full of bold and rich textures. How would you say your sound is developing with each release?

My sound has been developing massively especially throughout the past 2 years since working with my producer, Dustin Dooley. I’ve always wanted to create music that had this ethereal, other worldly element to it but that was something I could never really accomplish by myself. I’m lucky enough now that I’m working with Dustin and he completely gets what I’m trying to achieve with my work and knows exactly how to get it there. Places is only the beginning; we have really started to nail down my sound now and I’m really looking forward to sharing more new stuff with everyone!

The release also tells the story of a difficult moment in your life where your mental health was becoming a monumental challenge. How natural did it feel to tell the world such a personal story?

It felt pretty natural to tell this particular story to the world really. For the past few years now I’ve become very open about a lot of my mental health struggles and it feels so good to share all this stuff. It’s sounds so lame and cliché, but it really is a case of wanting to talk about all the things I wish I had heard people talking about when I was growing up. Sometimes I think back and feel like maybe it would have made a difference and maybe I wouldn’t have had such a hard time with it all if people talked more about mental health issues and all that encompasses when I was younger. So if I can be a person that makes someone else feel a bit better about what they are going through, or be someone that they can relate to, I’ll absolutely take that role on.

You’ve shown that you’re not scared of appearing vulnerable with such an honest display of emotion on ‘Places’. How important do you think the aspect of speaking about such issues is to the stigma around mental health?

I think it’s absolutely crucial to share experiences like this (of course if you feel ready and comfortable to). I really feel like we should slowly be teaching kids and young people about this stuff from the get go. I consider myself lucky that my circumstances made me have to deal with my mental health issues at a young age. A lot of people don’t hit that rock bottom point until later in life which is so much harder because you’ve been living life a certain way for so long and so it becomes more complicated to deal with, especially if you have a family depending on you. I want to live in a world where this process is easier because people have so much more information on this stuff. Like for instance, if I had known about OCD – not in the way it is portrayed, but it’s true forms and how it can affect you – or had learned about it in school, I feel like it would have saved me some suffering. We are definitely getting there as a society but there is still a way to go.

‘Places’ is now accompanied by a music video that perfectly encapsulates the song’s message. How did you come up with the concept behind this?

My director, Jordan Cox, came to me with the concept for the video and instantly knew that that’s what we had to make! He was with me throughout that period of my life so was the perfect person to make this video happen.

You’re just one of many artists from Jersey stamping your name into London’s music scene. Why do you think the area creates so many talented artists?

I think growing up on an island as small as Jersey is a very strange thing to experience. I see this especially since moving to London and seeing how different it is here. I think this definitely gives people a unique creative perspective which can help the birth of amazing art. I would say a big thing is also the scenery in Jersey. It’s an extremely beautiful place and therefore very inspiring.

Your brother Tadhg Daly is also a music artist, do you think a collaboration would be on the cards at any point in the future?

I would absolutely LOVE to collaborate with Tadhg. It’s definitely inevitable. He is one of my best friends and we spend a lot of time together and run in the same creative circle but an official collab is definitely on the cards, it’s just a case of picking the right moment!

What can we expect to come next from you?

Expect more acting and more music! I’ve still got a lot going on with season 3 of Hanna as well as the release of the film Boiling Point coming very soon so hopefully you’ll be seeing a lot of me! I’m working towards an EP at the moment which means a lot more music coming from me too! I’m so excited about everything that’s going on, it’s all very cool stuff!