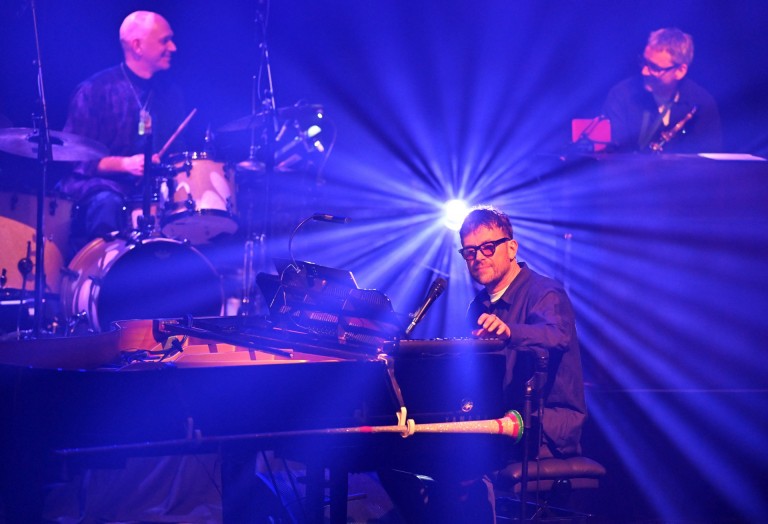 Damon Albarn Live at The Barbican

The Barbican transported guests with a live performance of Damon Albarn’s latest album ‘The Nearer the Fountain, More Pure the Stream Flows‘, inspired by his deep connection with Iceland.

For the past twenty years, Damon Albarn’s work has meandered between a long list of solo projects as well as brief resurgences with Blur, Gorrillaz and The Good The Bad and The Queen. It is a wonder he is still creating exciting, new music but his latest offering is just that. He has come a long, long way since his days singing about feeding pigeons in the park with 90s powerhouse Blur.

Last Tuesday, Albarn played his 2021 album The Nearer the Fountain, More Pure the Stream Flows in full to a captivated crowd at the Barbican. The show begun with the albums title track- a tribute to his longtime collaborator Tony Allen who passed two years ago. The song was performed almost completely in the dark, with no lighting effects creating a haunting lament for his late friend. The show was off to a sombre start and the atmospheric, melancholic mood lingered throughout the evening.

Albarn took command of the room immediately despite not acknowledging the presence of the audience for almost an hour. His performance felt like a journey, with the music leading you to immerse yourself dreaming of the barren Icelandic landscapes which inspired the album.

The album has orchestral pieces which feel more experimental and self indulgent, but is broken up with bursts of positive, relentlessly energetic songs that Albarn no doubt knew would be crowd pleasers. In a moment of surprising ridiculousness, he held a metre long bugle above his head as if it were some sort of religious practice. Some audience members held their phones up to capture the bizarre scene with Albarn reacting by pointing it in their direction as he tooted along playfully.

Back to his piano he went, where he spent the majority of the evening. The album, much like Albarn’s performance at times, feels dramatic, like it is the soundtrack to a movie we are yet to see. Soundscapes of birds and nature mixed with the orchestral build ups and moments of pure feeling are what makes this album feel like a real diamond amongst his already impressive catalog. There are so many layers, every song is as surprising and moving as the next. Highlights from the show included ‘Royal Morning Blue’, the sublime ‘Polaris’ and ‘The Tower of Montevideo’.

The live performance is more stripped back than originally planned. The mini orchestra was intended to be a much larger collective before covid forced Albarn to rethink his stage set up. Despite this, the show still does the album justice with a stunning display by one of this country’s finest songwriters.