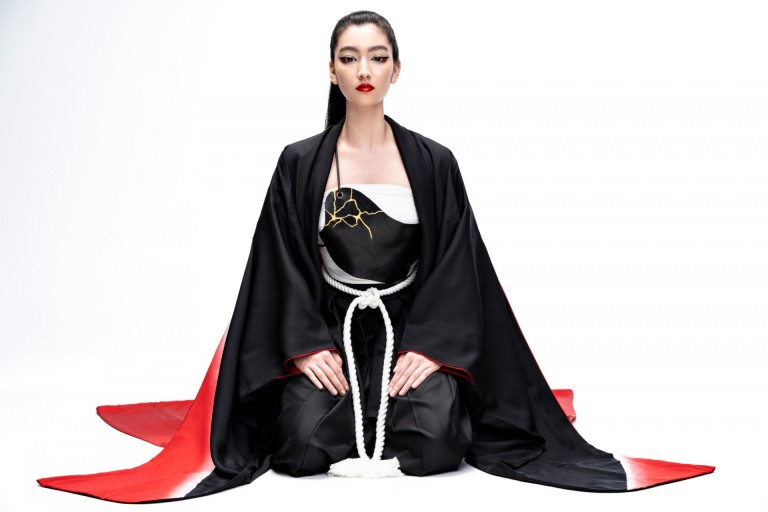 Sarina’s ‘Atlas’ is a heady concoction of east meets west cinematic goodness. The Tokyo based alt-pop singer-songwriter Sarina, who shares both Japanese and Lebanese ethnicities, channels traditional Japanese culture and instrumentation on her latest lush, richly melodic single ‘Atlas’, accompanied by a visually stunning, aesthetically charged music video, where performance meets art in a dazzling splash of colour and choreography.

“The song Atlas, which starts with a magnificent intro featuring the sounds of an orchestra and powerful Taiko drums, is designed to evoke and resonate with the feeling of watching a scene in a film,“ Sarina shares. “The lyrics are about toxic love. The act of sacrifice has been romanticised beyond what it is: although necessary sometimes, unreciprocated sacrifice has been revered to a point of damage and loss of one’s self. The title takes inspiration from the Greek myth about the titan, Atlas, who carries the heavens on his shoulders. Similar to the myth, the song symbolises holding on to everything yourself for fear of burdening your partner. It’s about applying too much pressure on one’s self to carry everything, sacrificing their own well being for the sake of the other.”

Atlas was written and composed by Sarina herself, and she also created the artwork and concept proposal for the music video, which depicts a strong and beautiful woman in a modern and traditional Japanese style that perfectly matches Sarina’s singing voice.

Speaking about the video, Sarina says: “I was adamant on including some traditional Japanese elements and symbols that hold deep meaning in Japanese culture like the Taiko drums, the Hakama costumes as well as Mount. Fuji.

In a lot of ways I hoped to show off some visual parts of Japanese culture I personally love very much, however it would be a crime to leave out the very key Japanese concepts that resonate strongly with the song’s meaning: Taiko is a largely male dominated instrument, especially the giant taiko I feature in Atlas. The symbol on its face “mitsudomoe” represents the body, the spirit, and the divine. The gold dripping down my face was homage to a Japanese technique of ceramic mending known as ‘Kintsugi’. The process of using gold to mend a piece of pottery after it has been broken. Kintsugi doesn’t hide the scars. It uses gold a more valuable material to hold the pieces back together. While accepting the scars as a part of the new form, I believe the same can be applied to people. We toil and we struggle but we come out stronger, wiser and more beautiful for it.

The Red Fuji on my Kimono as well as in the background of the video have a significant meaning in Japanese culture. The famous Ukiyoe artist Katsushika Hokusai painted a rendition of the beloved Mount Fuji when struck by early morning sunlight in the summer. Fuji is already a symbol of spirituality and strength in endurance, however the red colouring is not only especially beloved by Japanese people, it is a symbol of humanity, being the colour of blood, the essence of life“.