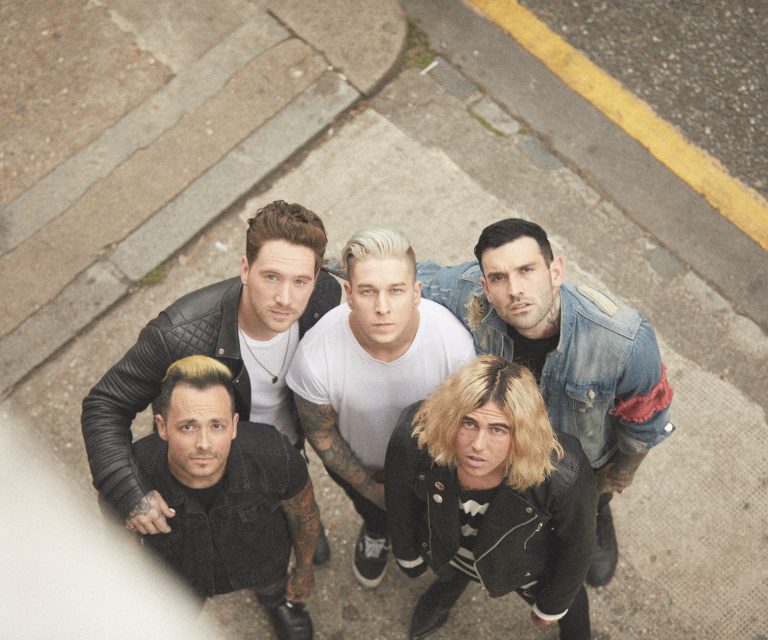 In Conversation With Sleeping With Sirens

Sleeping with Sirens’ Kellin Quinn has a lovely phone chat with me while touring the states. I met the band a couple weeks at our exclusive shoot for the feature, they were all so lovely and welcoming as I stumbled into the photo studio to get a behind the scenes look on the shoot and also to introduce myself to the band.

We got stuck into chatting all things music, Kellin mentions to me as a kid he’d been a fan of music that played on the radio or most of the time things his parents would of listened to. He got more serious with music as a career when he started high school. “I had a couple of friends and we went skateboarding, they got me into the warped tour scene, so we would just go out skateboarding every weekend and stay out late and listen to punk rock music.”

The way Kellin writes lyrics differs day to day telling me he either “we just follow the inspiration and if its there’s something like a good idea or a topic or a good melody- we go from there.”

I fell I love with their music video to their newest track ‘Leave It All Behind’, they released it a week ago, I compared it to James Bond style because of the suit scene but in fact it was inspired by The Matrix (I was close, no?), “I had a pleasure writing that treatment- I really wanted to create a video that features one of my favourite movies, Matrix.” He tells me he’s always dreamed of reenacting scenes from that film like falling out from the sky and dodging bullets, so having the chance to do that in this one was something he was ecstatic about. “The images and stuff going on would be somewhat shocking but also creative. We had a lot fun doing the video.”

I then go into talking about the track itself, Quinn tells me Leave It All Behind, is literally within the title of the song itself, “we want to tell people to try not to be so hung up on everything, I think we as human beings get stuck in a small box where are so consumed with everything that’s going on in our lives that we don’t see the big picture in what we have to offer.“ Kellin goes on to tell me that as a society we need to start to be more vocal about issues like anxiety and depression start to be vocal about the issues and not make it a taboo “a lot people hold it inside and they don’t really tell anyone, until it’s too late. So I think that opening up and leaving our issues behind and kind of discussing and not being afraid to communicate that to other people, that’s what this song is about opening up communication between our fans or just people in general to discuss the issues and to resolve them.”

I asked Kellin what’s the difference between this album and others they have made, he tells me that this specific album was therapeutic for him that it was literally him just opening up and telling you about his life “I’m shedding my skin being completely venerable and honest. Our first album was just the excitement of being in a band, it kind of just works its way up but yeah our new album is just very much honest.”

I was intrigued to know whether Kellin likes playing on stage or recording in the studio more. He enjoys writing music and preforming live, though there’s something different about being on his own that makes him appreciate being in a studio writing and making the music. “I think there’s just something about being on your own and listening to a piece of music and not having any vocals on it and creating something from nothing- there a real magic to that, that’s something I feel very comfortable doing- it’s like putting together a puzzle, it’s a lot of fun for me to do that.“ Then he mentions that preforming live is also makes him super happy because you can be close up with fans- you can hear them sing the words back to you, and it’s a rewarding feeling for him. He says it’s a bit of both but definitely prefers studio work and writing songs.

I decided to be a little nosey and ask him in his 9 years of being in a band what he had learned by being in the music industry and if he had known in advance, what would that thing be so he wasn’t stuck in any situation, Kellin was very quick to reply and tell me “the alcohol is not mandatory; you don’t have to drink it.” He has been very open talking about his drinking past, and told me it’s just not needed all the time- it’s ok not to drink. Then I said what he thought was missing in the music industry for musicians today, he starts of by saying more and more people growing up in this generation grow up worrying about the art form and not so much about the outcome of creating the art. “I think getting paid for music, riding a tour van or going to hotels, which should be the icing on the cake- the music should definitely top it.”

Mental health was another thing we got deep talking about, he said he had been coping with it day to day, but his advice for anyone who’s going through it more frequently is that they have to look inside and see what the internal issues are. “I think discovering yourself figuring out what and finding out the core problems is definitely one piece of advice that’s been a game changer for me. Instead of looking outdoors, I think we make a lot of excuses too like, “why I’m this and this is why that happened” the real reason you are the way you are is because of yourself. So you have to figure out what is good to help you.”

Kellin told me his greatest accomplishment was being a father, this made me smile inside and out because as a daughter myself I love my father very dearly so to see someone so happy about having a daughter I’d imagine my father being the same. Quinn went on to say he thinks having someone in his life that looks up to him and looks to him for advice and is in awe of him is something he thought he’d never experience, having a daughter and to look at all the stuff he’d done in his life, nothing beats this moment- a bond between a father and daughter. “Being a father is way more rewarding than anything I’ve ever done.”

Last but not least we discuss what they’ll be doing in the future, their album ‘How It Feels To Be Lost’ is coming out on 6th September on a new record label, Sumerian Records– they’ve literally started from scratch on their social platforms with the release of their new track and upcoming album. They are touring around as we speak and for the new album. “I think that our band is definitely one of those artists that we like to get out there, we like to work we like to play shows, we like to meet & greet as much people as we can- we want try to cross off as many countries off our list I think we have been to pretty much all of them but there’s a few we haven’t been to yet, so I think that would be the main thing for us to go to places we haven’t toured to before.”

Kellin definitely reads fan comments on social media, so if you think he doesn’t notice you then think again. He told me that there are a lot of fans that reach out to him and the other guys asking him why he’s not been in a certain location for tours his reply is “We are trying to get there!”