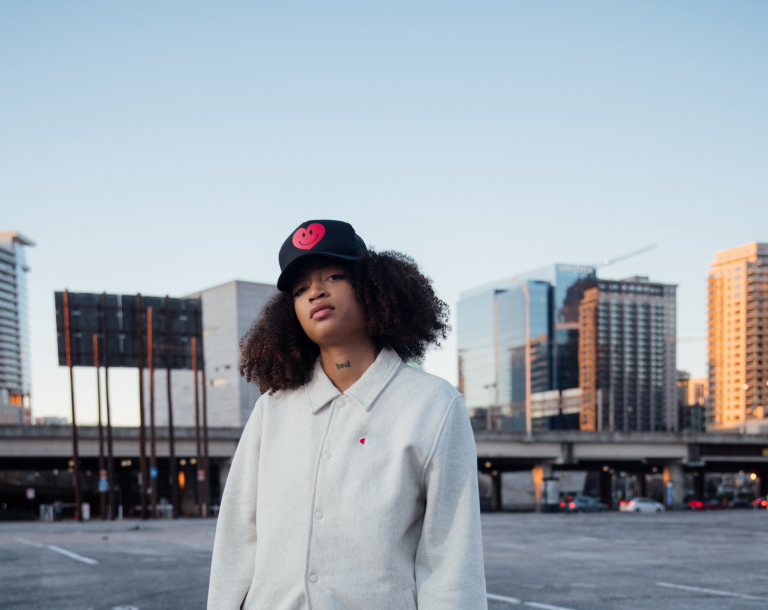 In the Fast Lane With Ray Moon

Through the millennial generation of limitless expression, the purely raw and un-apologetic Ray Moon emerges; who expels her bad omens of the past through smoky base, deep beats, and takes up new and fresh space with her angelic vocals and badass bars. She’s the SZA, Ray BLK cross- breed we have been waiting for, yet her sound is pedigree, delicious, detectible and keeps you going back for another slice.

Ray is making something evident to us all- that there is nothing more powerful than a black, queer woman who allows the sun to shine on her skin, and reflect outwards the inner ethereal that is the strong and irrepressible. And there is nothing more exciting than a black, queer woman with unmistakable talent and creativity, to be given the floor to spread her roots, soak the nutrients of opportunity and blossom.

Usually cruising the hustle at 0-60 in 3.5, it was great that she had a moment to slow down, chill, and hop onto a zoom call with London dialling her cell phone from her hometown of Atlanta. Being born in Queens NYC and raised in both Georgia and Florida, Ray grew to be a girl of east- coast, that had a clear talent of basketball, yet didn’t realise quite yet that she was sitting on her own treasure chest of creative talent.

Rising to take on a challenge, she longed for something bigger and something expressive, and through simply letting her pen touch paper, her love and passion for poetry and the written word grew; emotion that spilled from the pages that made their way to the listening ears of her family and friends, who nodded in affirmation that she did indeed, have the talent. Poetry morphed into lyrics, and those lyrics found their way to sitting on a chilled, inviting beat, ‘The Real Rachel Marie’ had found her aesthetic, settled into her outlet, and began using the platform to morph and invent something that is still ever changing for her. Ray Moon was truly born, with a band new polished sound.

“When I say my mum would be blasting music around the place, I mean BLASTING” Ray laughed. “Sade, who’s so poised and so smooth, Aretha Franklin, those soulful, unique sounds, within that, that’s definitely where I found my own voice. Those are my biggest influences.” Explained Ray. “Nowadays a lot of the music, it’s you know, you don’t really feel anything, it just a whole bunch of words put on a beat. But those old school classics, I like stuff that makes you feel something, where it’s happy, sad, mad, in a good mood. There’s always a song to match those emotions.”

If there’s one core, unshakeable message in Ray’s message, it’s that she is herself, un-movable for anything and anybody apart except from her own change of mind. Blurring the lines of what it means to be masc and femme, Ray will sport high fashion Burberry at a shoot on one day, and opt for snap back and slacks the next. In her words simply “I just be me.” She laughed. “True to myself, saying f*ck you to anybody who thinks otherwise.”

Ray’s new single “Glowin” showcases the sweet, smooth and easy- going vocal side to Moon accompanied by summer-chilled guitar chords underneath, along with a deep beat drop that will not allow you to sit still listening. “I wrote the songs within 45 minutes of listening to the beat. I’m an impulsive writer, and when I heard it, it was just came so naturally.” When asked about what the song meant to her and the inspiration behind the lyrics, she said “I was motivated, I felt good within myself that day, confident, and I think that radiated into the mood of the song and the lyrics. It’s about outgrowing relationships, maybe realising you deserve better when someone is doing you wrong, breaking out of that shell, and wearing that ‘post- breakup’ glow really well, you know what I mean? We spend too much time making our significant other shine, lighting their candle.” I knew exactly what she meant, and like every woman on their journey in an ever changing society that continues to try and repress them, we need empowerment bops just like this one, to keep us ‘glowin’.

But this year, glowin or not, these have been some dark and difficult times to handle for every single one of us, and Ray shared on how she’s been keeping her mental health in check and ensuring she stays on that motivation and vibe to keep productive. “I’ve been taking A LOT of bubble baths!” She laughed. “I’m definitely a soaker, for sure.” She listed that spending time with family, generally relaxing, watch a whole bunch of movies, and of course a hella lot of writing has been the tonic and the ticket to get her through. “Luckily I was still able to be in the studio.” She continued, grateful at she was able to keep those creative juices flowing. “Because if I had been confined to the house, I would have probably ordered a whole studio set, I could have never stopped recording.”

And with that passion and drive, the hope for the future is only driving Moon faster. “I’ve been experimenting with my different voices.” She teased, noting that new material is absolutely on the way. “I have 40 different variations of my voice, in fact after ‘Glowin’ by next song coming for you guys is called ‘Rick James’ and I use a deep male style tenor voice that I’m so excited to share.”

There’s something unbelievably exciting about an artist that never sees a finish line but sees a goal that’s ever changing. An artist that continues to show expression through different lenses and experiments with different ideas, mixing lotions and potions of sounds and visuals together to create a banging chemical reaction of something new- and it’s clear that this is something that Moon embodies. With sponsors by Sprite, radio stations adding Moon to their playlists, and billboards going up left right and centre, Ray is creating the buzz, shooting for the stars and landing on the ‘Moon’.