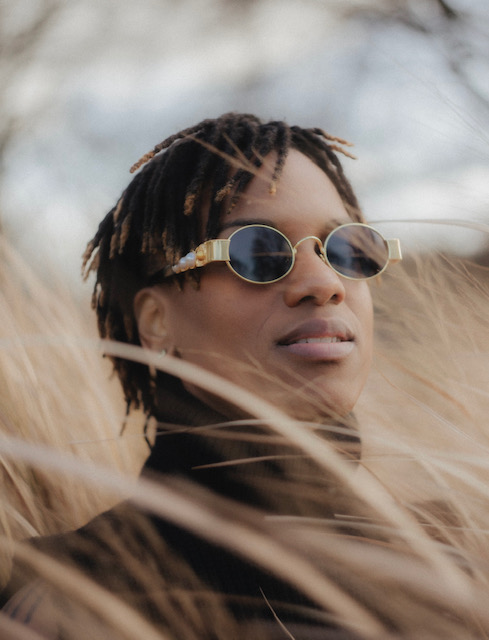 “Life can be so complicated; still I’ll push on through,” sings the newly signed Roc Nation member Kay Young in ‘Going Through’ from her debut EP ‘Middle Matter.’ This body of work confirms Kay’s artistry and versatility. The multi-faceted production combined with rap and singing over vulnerable lyrics incorporating classic Hip-Hop sells her pretty well. To properly introduce Kay Young, we asked about the meaning behind ‘Middle Matters,’ the state of Black British Music, and how the grind paid off.

Born a natural entertainer, Kay Young started early with impromptu shows for her parents and friends, she even taught herself how to play drums and use producing software. She explains how her journey all began: “Since a child, music is something that I have always done. I was always beatboxing, dancing-I loved to entertain! I went on to study Music Technology in college, and at the same time, I would take part in beat battles in the evening. I knew from a very young age that music is what I wanted to do as I couldn’t see myself doing anything else”.

From the way she talks, you can sense how confident and sure of herself Kay really is, meant in the best way possible. As an artist, you need to believe in your art. Kay promotes ‘throwing away the rulebook’: “I’m very much chilled and laid back. However, I tend to express my feelings through my music. The music that I make is very refreshing; some would probably consider it risky the way I’m able to cross genres on one track. I’m all about throwing away the rule book and having fun”.

It was a matter of time until someone would pick up on her talent, and that is exactly what happened. Kay took a break to reset, and coincidentally enough, this was when everything changed. There was a message from Jay Electronica saying he has something to show her. Little did she know, it was a conversation he had with Jay-Z about Kay’s music. Long story short, Kay Young got signed to Roc Nation.

“Being signed to Roc Nation has definitely opened up doors for me. I’m having conversations with people I probably would never have had if it wasn’t for the opportunity. People tend to pay more attention to you once they know that you are affiliated with someone who carries weight. Music seems to be reaching a wider audience, which is great” Kay expresses what’s been like since she got signed.

On August 14th, Kay Young released her debut EP ‘Middle Matter’. In six tracks, this project encapsulates a certain essence of it’s okay you are not behaving according to the societal standards, whatever they are. Kay elaborates on why this is important to her.

“The inspiration behind my EP is about me embracing where I am right now and celebrated the fact that I am no longer where I used to be, I’m not where I want to be, but I am on my way there. The middle part of your life is probably the most testing time as it often feels like your in-between two worlds, the old you and embracing who you are about to become- you learn a lot about yourself at that moment, and it’s where you do the most growing. There is a certain expectation that society puts on us that makes you feel like you have failed in life if you haven’t ticked the following boxes by a certain age i.e. married with kids, mortgage etc. ‘Middle Matters’ is me expressing the fact that I haven’t got it all together yet, and that’s ok, but I’m working towards it”.

The entire concept of ‘Middle Matters’ is a brave one to address on a debut project. While talking about the EP, Kay mentions one track she didn’t think she would be adding. “‘Giving Thanks’ is probably the one song I didn’t think I’d sing about. But I actually wrote that song the day I got kicked out of my house haha. Also, wanting to make my mum proud and show her that the years of me grinding away in the studio is now paying off as it has affected our relationship over the years”.

Art and music go hand in hand. There is always a reason behind the artwork for specific, and that why I found ‘Middle Matters’ intriguing with its effortless cover art. Kay pins it down for us: “When something is too well packaged, it leaves no room for questions or a want to know more. I wanted to create something that sparked an interest for someone to press play”.

Currently working on her album, eager to get back on the road again, Kay thinks back to her favorite show: “I did a show a few years back at the Queen of Hoxton man, the energy in that place was unreal…felt like I had an out-of-body experience. Everything was perfect, down to the lighting and sound”, she says, hoping she will get the opportunity to tour soon.

As well as her music, Kay is influenced by various artists. From sampling James Blake’s ‘Retrograde,’ she confesses her love and admiration for the goat: “I’m a massive fan of Kendrick Lamar, he is one of a kind. I love how he is able to make such dope music but finds the balance to also love his life away from the public eye. He doesn’t need to churn out music after music because he leaves us with enough to keep us going until he has something to say. He does it in his time- that’s power! Then you have Drake, who has been consistent and has never missed a beat- I admire his work ethic and how he has been able to stay relevant throughout his career”.

Kay Young might be a newcomer and fresh talent, but she will be at the forefront of Black British Music. With everything that is going on in the world, everyone will agree all we can do is support each other, and that’s what Kay stands for as well: “I think it is in a good place right now. Artists are coming together more now and showing each other support. As the saying goes, ‘If you win, I win’ It’s about recognizing that it’s all about the movement, pushing it forward. Someone else’s win is only helping the next person get through the door. The UK Jazz scene is a perfect example of that”.