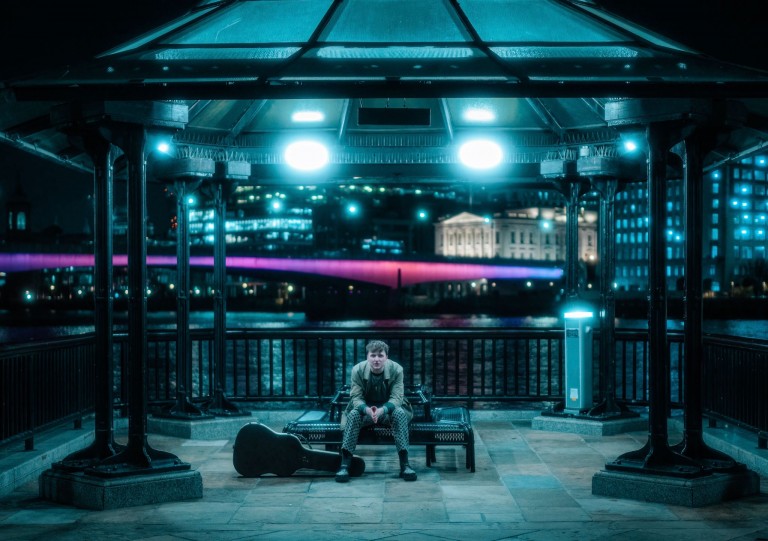 Scottish singer-songwriter, Murdo Mitchell, stepped into the limelight as a solo artist in 2021, during the height of the pandemic with his debut EP ‘Stay Nocturnal’. It was a release that saw him gain plaudits across the industry, whilst his deeply personal songwriting style won him a plethora of fans. In the year that’s followed since, Mitchell has gone from strength to strength. In March he returned with the stunning single ‘Ghosts’, and now the artist has just released ‘Jaded’, an introspective single that delves deep into an old friendship.

Channelling a powerful take on pop-rock that he’s become known for, ‘Jaded’ sees Mitchell’s vast vocal range come to the foray, adding a raw and emotive edge to the songs story. It’s within the lyrics that the track truly shines. The single tells the story of how one of his closest friends became too reliant on Cannabis, and how his addiction caused a fracture in their close bond. Despite Mitchell’s attempts to steer him away from the sauce, sadly much of his personality soon became lost, as did many of the similarities they shared. It’s an all-encompassing theme that even gave birth to the tracks name itself, as the word ‘Jaded’ is described as: lacking enthusiasm &/or being physically exhausted. A line that could just have equally portrayed their relationship come the end.

It’s a release that further reinforced our belief that Mitchell will go on to be a prolific songwriter in the not-so-distant future. With such an intriguing concept we just had to speak to the artist about his own experience with drugs, the emotional turmoil of such an experience, as well as his aims for the future.

Hey Murdo! Thanks for chatting with us today. Growing up in Scotland, what was the music scene like? Was there a specific sound that resonated with you?

So, my music scene growing up in Glasgow was busking really. It’s interesting because when I started busking there was a group of buskers that all knew each other from doing that – as you’d see them all most weekends and you’d get talking and what not. You’d try to beat each other into the best pitch in the morning, and sometimes you’d get in for 6am and there was someone sitting at the spot you were trying to get and you’d think, ‘F**k sake’. From my time in Glasgow a lot of us who shared the same street are now signed and touring and making some headway in the music business and they all learned from busking. For instance ‘Dylan John Thomas’, ‘Aaron Smith’, ‘Christy’, ‘Anna Shields’ (‘Dead Pony’) etc. So I do believe busking is a great way to hone your craft, it should be seen as sort of a paid apprenticeship almost.

How did your music journey begin? Was there a moment where you knew this is what you wanted to do as a career?

My musical journey began really when I was loaned an electric acoustic guitar from a family member, I then taught myself 3 chords & went busking. I was 11 years old. It did start pretty much exactly like that. My Dad did come out with me when I was that age as the streets of Glasgow can be an interesting place. I went out busking with an electric acoustic guitar, no mic & a pocket Marshall amp that ran on AA batteries. You couldn’t hear it from a metre away, however it didn’t matter as I wasn’t any good anyway – it probably helped not hearing me. I made £50 in a couple of hours of playing the same song ‘Use Somebody’ by Kings Of Leon, then I thought I’d learn more and go out most weekends – and that’s what I did.

You started releasing music just after the second lockdown, how did you find the experience of building a body of work throughout such a tumultuous period?

Well, I used to be in an indie band just before lockdown and we all lived together in London. It was maybe not the wisest idea all living together and we ended up not writing all that many songs. We instead filled a lot of our time with celebrating the fact we were all living together in London, but friendships got strained, of course. Once that fizzled out I started writing my first E.P. Well, I started writing some of it during that time as I always liked the style of music I’m doing now and I always felt more natural with an acoustic guitar, however I properly put them together during lockdown. I finished them and got them recorded properly, which was a weird experience I suppose. I Did a lot of it via Zoom but I really was only able to focus on music, so lockdown was sort of bittersweet experience for me –  it was a break from the norm that I really needed that maybe went on for a bit too long. I would sit in my attic in my dad’s flat in Glasgow and write and play through ideas. A lot of it was quite depressing stuff coming out, but I suppose that’s how I felt at that moment.

You’ve just released your second track of 2022, in the form of ‘Jaded’. What was the inspiration behind the track?

The inspiration behind the track was actually me and one of my best mates from years ago really just grew apart. Partly was down to just growing up and our lives taking different routes but partly down to what I felt, which was smoking too much weed. I’m not one to judge, I’ve done my fair share of everything. I think from 17-18 I lost a year getting stoned. But we all went through that stage and most of us get out the other side, but it just seemed like he was stuck in a rut almost. I said it was like: ‘we all dipped our toes in & he jumped in the deep end & became a merman.’

It was a shame to see although he’s not some sorry case and I don’t want to make out like he is – we locked horns a lot and called it a day on the friendship really. I say that but if I see him in the pub we’d share a drink and chat, I’m sure. So, I wrote a tune about it with the name ‘Jaded’ fitting the theme.

It’s a compelling story, with a title that fits perfectly. Does such a warm and personal songwriting style come naturally to you?

A warm songwriting style – I’ll take that. I think a lot of my songs come from a sad state. I find it easier to convey sad emotions than happy emotions and I find it easier to write when you’ve got something to write about. I do love melodies and songs where you have to really go for it and that’s really my style, so I’m trying to always write to my strengths now as I’ve got 100 songs that I’ve written but can’t actually sing haha.

What impact did the origins of the story have on you? Did it make you change your views on Cannabis?

No, not at all. People will preach about weed being bad then go to the pub and have a pint. People say it’s a ‘gateway’ drug. I’m not sure I believe that – I don’t think I’ve ever smoked a joint and thought, ‘oh you know what, I’d love a line of coke’, but with 4/5 drinks down I think it’s easier to come to that conclusion.

My views fall mostly in line with ‘everything in moderation, including moderation.’

How would you say ‘Jaded’ and your last single ‘Ghosts’ differs from your well received debut EP of 2021, ‘Stay Nocturnal’?

It’s hard really to say, I think ‘Ghosts’ for me turned out the best in the studio out of all my songs – I’d say the recording I’m most happy with is ‘Ghosts’. However, I’d probably still be finishing the first E.P if I was allowed to be and music changes, times change, artists change and grow. I think in 3 albums time it’ll be more telling the difference between them.

Both tracks build upon a pop-rock meets indie-folk sound, what influenced this style?

I struggle with writing music all in one style. It really does depend how I feel at the time, or what I’ve been listening to. Some days I have country-esqe songs down and others indie rock songs. At the end of the day songs convey feelings & you don’t just feel the same thing. You don’t just eat the same food everyday, you might have a favourite food, however you can’t only eat that. So, sometimes you need to rework songs that have strayed slightly from the path you’re on so they can fall under the umbrella of what your sound is. This can be quite a fun process as well.

You look set to perform in London in September, is this something you’re looking forward to?

I’m very much looking forward to that show. 16th September at St Pancras Old Church, it’s a beautiful venue and I believe it’s almost sold out. It’s kind of a big milestone for me, I’ll have my full band with me and I really love playing these songs live – that’s when the really come to life. I can’t wait.

What can we expect from you throughout the rest of 2022?

I have a few gigs that haven’t been announced yet and I’m back in the studio recording next week. So expect another couple of releases and bigger gigs before the years end for sure. I feel right now that this year has been about building the foundations and getting things in place before it really breaks. it’s a process that I’m enjoying.