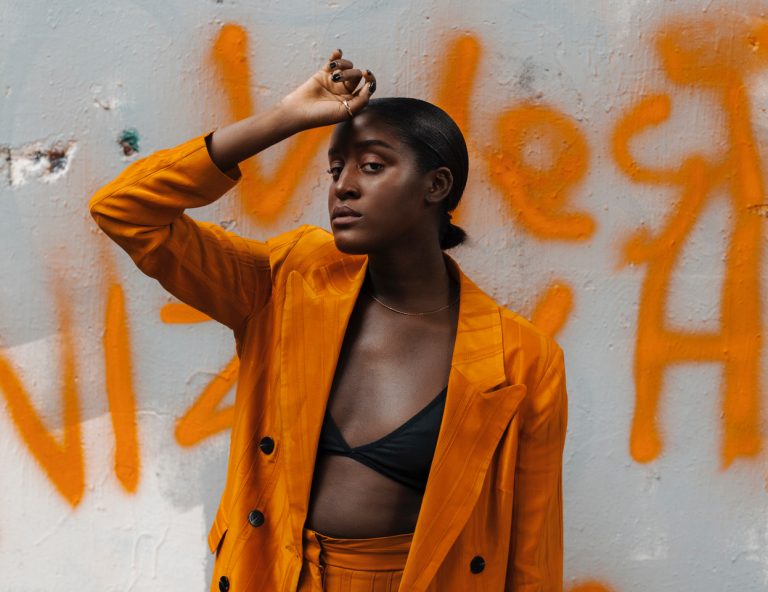 A revolution within herself, an individual that doesn’t need a stepping stool or helping hand- MYSIE is a magnetic force that will instantly lure in anybody who comes across her music. Not lure, but induce in a way that’s less subtle, as if you’re walking along the highstreet and you see something that stops you in your tracks. An old lover, the smell of freshly baked bread, a busker playing a nostalgic riff, something that makes you feel.

This has become evident since the release of her debut EP Chapter 11, gaining praise from a number of media outlets and music reviewers alike, and we can fully understand why. Her single Rocking Chair is a hauntingly beautiful take on the feeling of isolation and loneliness in a seeming interconnected world, expressed through a sequence of cinematic yet doleful visuals. Contrastingly, her lead single Doves exhibits lust and yearning, while taking inspiration from ‘Urban Riders’; a multifaceted body of work by photographer Mohamed Bourouissa. Along with the singer’s spacious arrangements and transportive, saccharine voice, Doves transcends any borders and whisks listeners to a melancholy dreamworld.

Raised in London as a second-generation immigrant, Mysie was instantly engulfed in music and the power history of its culture, especially as she ascended to the throne as the granddaughter of a Ugandan musical legend which by no doubt translates into her artistry. So, we decided to have a 5-minute session with the musical prodigy where she talked about relating to the colour orange, erasing stereotypes and the importance of being present.

You’re only twenty-three years old and began making waves within the past month. What ways can you summarise your experience working in music? What lessons have you learnt so far?

I’ve learned to trust the process and to not put any limits on myself. It’s been an amazing experience and I’m continuing to find and understand myself and my sound. Knowing your purpose and having intention with every move is the most important lesson I’ll take with me for the rest of my career.

You’re initial persona began under the name of Lizbet Sempa, what would you say is the biggest difference between her and Mysie?

I started my career at 17 under Lizbet Sempa. At the time I was young and being influenced by a lot of different music but not really quite knowing who I was. I was very clear on my influences, and still am now, but it wasn’t translating through Lizbet Sempa. There was a lot of push and pull about where I “fit”, what I “should” sound like, and I felt like I was being led rather than taking the lead. So, I hibernated for a couple of years and started working with my producer Duncan Pym. We understood each other and just clicked, put all ego aside and worked with totally open minds. It was during this project I realised it was time for a change. I decided to change my name to MYSIE (pronounced my-zee) which is actually the nickname for my original birth name, Marj.

Other than “On a Level” by Mac Demarco, were there any songs in particular that inspired you to develop your music production and experimentation?

Empire Of The Sun – We Are The People – this track is so ethereal and nostalgic; the production takes you to a completely new space. Absolutely timeless. Another track

I’m super inspired by is Tame Impala – Let It Happen, the synths the pads and topline is just incredible. Lastly, Anderson Paak – Dreamer, the bass, and the tone of the whole song is otherworldly.

On that subject, you’ve previously talked about not wanting to fit into a stereotype of a certain type of black soul singer. What kind of issues do you feel like these stereotypes enforce and why do you feel like it’s important to break them?

I think we often associate being a black female singer, as being a soul singer. I 100% sing utterly and completely from the bottom my soul. However, I don’t believe I should be put into a box as being just a black soul singer because I have a particular tone, there’s more to it than that. I feel with these stereotypes that it really is just a generalisation. Music is constantly evolving. When you really listen to my music, there’s a lot of experimentation, many layers, there’s elements of pop, electronic, alternative: It’s time to start being more specific and give more attention to detail.

You have a diverse background in music, is there a particular category or style that draws you in the most?

Within this past month you released your debut EP, Chapter 11- what is the most significant element that you want people to pull from this record? What does it say about you as an artist and person?

You are so important to this world. Put yourself first. This project came from a period of my life where I didn’t love myself, I didn’t see my worth and I didn’t value time. Chapter 11 is about starting afresh. Starting a new chapter in my life and taking you on my journey.

If you were a new addition to a crayon box, which colour would you be and why?

I would be an orange crayon. I love orange. It’s my favourite colour to wear, reminds me of the sun, happy times and just gives good vibes.

Despite all the negativity in the world, what is your favourite thing about humanity right now?

People are gradually becoming more conscious. We are speaking up for what’s right instead of sitting in silence.

Is there a quote you consider to be your life motto? What do you live by?

What is your ultimate goal to achieve within your music?

To create and play music every day and to connect and affect many different people all over the world. That is my ultimate goal.