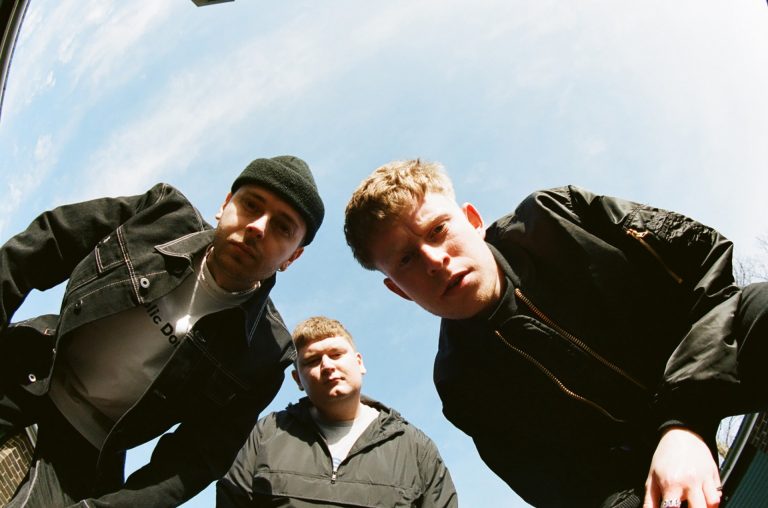 Three piece group NOISY have been busy making a name for themselves in the industry, and now it’s time to reap the benefits of years of dedication and hard graft. From opening up Reading Festival on the Radio 1 Dance stage, to having their brilliant single ‘Young Dumb‘ featured on FIFA, NOISY, comprised of Cody, Conor and Spencer, have figured out the winning formula – as we move into 2022, the trio will certainly be popping up on everyone’s one to watch lists.

With a refreshingly authentic DIY approach to their craft, NOISY have full control over their direction, with everything from recording and producing to directing videos and even creating their own merch. Earlier this year the trio could be found touring alongside legendary acts such as Yungblud and You Me At Six – fast forward to the present and NOISY are now taking center stage at their very own headline tour. With their career progressing at lightning speed, we jumped at the chance to speak with the band after their performance at Reading Festival to talk all things music, navigating the pandemic and more.

Hey NOISY, how’s it all going for you guys, how did you deal with the national lockdown and keep motivated with music?

Cody: It’s been up and down really, we’ve written a lot of good music, but also we’ve been deprived of playing some really good shows. Thought I think we’ve come out stronger and I feel like we’re better as a band now and we’re better as a unit.

Connor: Obviously, it’s not ideal but you’ve got to make fun positives out of it right instead of just sitting around, so we just really dived into writing music more than we ever have before and we’ve come out with some material that we’re very excited about- so maybe this lockdown was a blessing and I mean maybe it wasn’t obviously, we would of loved to play a gig but we couldn’t!

What was working together over lockdown? Was it mostly zoom sessions or in person?

Cody: I mean, yes, we also actually did it over zoom for about a month. And it was awful. We were trying to finish a song for about three weeks, going back and forth. I remember Spencer trying to show us production on zoom. And we were like, “yeah, that sounds weird!” production sounds so bad through Zoom. And it’s just not the vibe, I think as a band- we need to be in a room together. But yeah, as soon as we could we just got in straight away. I think some neighbours got a bit pissed off.

Connor: Eventually we were like, let’s just make our own bubble and then a couple days later the police came round. THEN we got a letter come through the door from the Police saying “someone’s complained about you guys.” So we were like brilliant…

Cody: So Connor pulled up in our neighbourhood and roll downed the window to his car and was like “Who’s the snake?”  But you know you’ve got to continue doing music even during crap times like this, you can’t live life without writing music. You need music.

What was it that first made you fall in love with music?

Cody: For me, I think just playing live really like being in kind of bands when when I was younger, the whole thing was revolved around playing live, playing our local youth centre. And that’s just what we’ve always just been so exciting about for me.

Connor: Yeah, I guess yeah, the same- like, obviously, the only reason you do this at the start is to play gigs. And then like you forget that because all we’ve done is make music for a year. The whole reason we started this is literally back in the day, there weren’t even any thought about going and recording the song was it, so I’ll just write some songs and kind of play them at a gig. Yeah, that’s it, you just want to have a sick time with your mates and make them run around in a circle. That’s what it’s all about. But that’s what we live for as a band really, we’re such a live band. So I think definitely live has always been like the driving force behind us.

When did you realise this was the type of music you wanted to produce/play – what drew you to the genre you’re in now?

Spencer: We can I guess, the options are endless. So we can do whatever we want and by doing that we’ve ended up doing this, they come from experimentation, really. And now we’re like, “That sounds good. So we’ll do that.”

Cody: The thing we’ve always wanted to be is to be like a big beat band where everyone’s jumping at every song. We’d be like “where can we make this noise?”  And “ how messed up can we make that beat sound?” So yes, it’s like experimenting, and just feeling excited about it. We’re the biggest fans of NOISY, but I think if you’re not the biggest fan of your own band, then it’s not going to work.

Are there many similarities or differences in your back catalog, from past music to current?

Spencer: I think all the newest stuff is so far away from what we’ve been doing before. But then there’s like every other song that’s going to come from us that is very different from each other. So I think that’s a sign that we never set out to do anything, right? It’s not like we’re trying to make it different on purpose.

Cody: Weirdly, when we do try and put a body of work together. It always seems to work out, flow and feel like this was meant to be but we never really write thinking “okay, this is going to be the next EP or whatever” we just write to feel excited. And what’s the next Big song, you know, we’re not out there to write b-sides-  we’re out here to write big festival type songs and hopefully one day stadium songs.

Tell us about your songwriting process…

Spencer: I usually like to start with like to be on my personal samples together and find something that feels exciting or inspiring for everyone here. And then like, what to start working on see if Cody gets a flow of lyrics or like, bars or whatever. And then it’s just like blossoms.

Cody: Sometimes I’ll just be writing bollocks , for like an hour and I’d be like, “Oh I’m shit at this! And then something will come up and you know, we’ll all get excited about it. And it’s like, Alright, cool. It’s like that one sounds good- anything that inspires us and we’d be like “ah now it’s working.”

I think having that encouragement from other people and also loving your own work is so important. Do you appreciate the feedback and opinions from people in your circle on your work?

Cody: We always love sending a chat to our team and seeing what our team think. I mean, our friends are like a massive part of NOISY as well because we write about our friends- it’s all kind of revolved around right now anyway, in our career, like, the youth culture, and like what we’re doing so if we’ve got their approval, then we know it’s good to go really, it’s like Cool, export,  Spotify- done.

What would you say your new single is about? How would you explain it to people who’ve not heard it before?

Cody: So about keeping a young mindset throughout life and then never really growing up mentally. Which I think is so important. You know, it’s always kind of “keep a youthful side to yourself. Because you don’t you don’t want to get boring.” Your life always has to be fun. It’s kind of like a really easy tongue in cheek song about that. There’s no deep meaning behind it, really. It’s just about being a young nutter and just having fun.

Your song was also featured on FIFA – that’s an amazing achievement, what was that experience like for you?

Connor: It’s like a big deal for us and all of our mates. Because everyone we know likes and plays FIFA. So yeah, we’re all football fans.

Cody: I mean, when it comes out we’re definitely getting it and smashing it out and hearing our song on it is gonna be weird. I mean a lot of our mates have obviously played FIFA for like their whole lives and anytime I’m at a party and I always speak to someone they’d be like “oh this is the FIFA song”- it’s funny that people relate to it like that because then it’s iconic to me, I’m just excited to see what it does. What kind of new fans it’s going to bring us in.