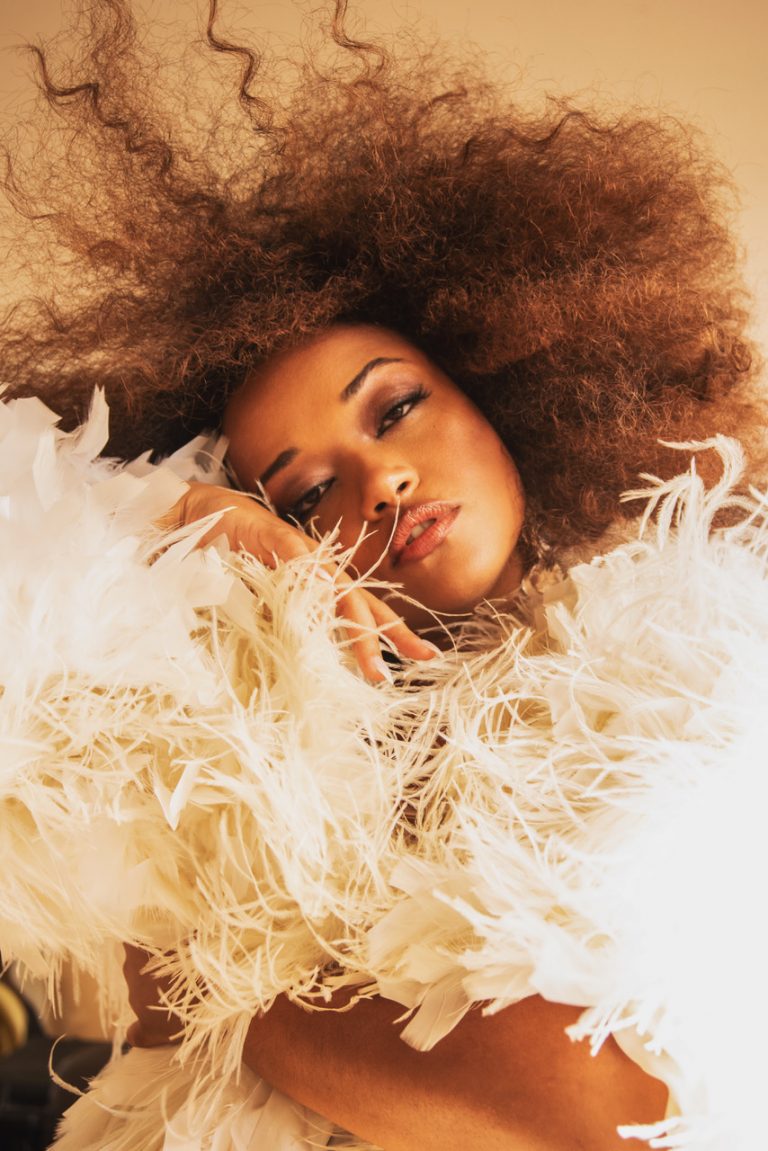 Of The Sun: Shay Lia shines bright with ‘Solaris’

“Of The Sun” is a translation of a Latin word ‘Solaris.’ “It is a place you can go – a state of mind. It’s where the sun shines brightest. It is a place of joy, dancing, sensuality, confidence, and warmth.” The same warmth evokes Shay Lia’s new EP ‘Solaris’, a self-discovery project inspired by West African beaches and beats.

Shay Lia is ‘a woman of the world,’ born in France, raised in the small, lesser known East African country of Djibouti (on the northeast coast of the Horn of Africa), and is now based in Montreal. Throughout her travels around the world, Shay sought to belong, but only after some time she realised her home is where she is: “Growing up, I felt very at home in Djibouti. France also represents this other part of my identity and family, so it was also natural to me to live there – even though it was very different from East Africa. As a mixed child, I never really felt like I was completely from one place anyway. I remember my cousins and aunts from both countries, asking me which one was my favorite – so even from their perspective, I didn’t fully “belong” in one place.”

She continues: “After high school, I moved to Montreal, and it was once again a whole new atmosphere, but I applied what I’ve learned through all my travels and experiences. I tried to connect with people based on values and shared humor and not care too much about having too many people like me. Even after 7 years in Montreal, I don’t feel like it’s “my” city even though I love it. I feel very blessed to have experienced so many places. I’ve learned to depend on myself and to define home as ME – wherever I am”.

Her critically acclaimed debut EP ‘Dangerous’ encouraged Shay to move forward and discover new sounds: “I didn’t want to stay in the comfort zone I had created with my debut EP, Dangerous, which was made of R&B, soul, and funk,” she reflects. Whereas with ‘Solaris,’ Shay is looking to release ‘a blend of R&B, pop, and afrobeat.’

If you’re wondering what it’s like to be in the middle of a pandemic promoting a new project, “lately, no two days look the same,” Shay puts it bluntly. “That’s what I love about what I do – it makes every day different,”  Shay admits that working during a global pandemic on a project has been challenging, especially as she was trying out a new sound without guidance.

“I live alone with my cat, so it was hard for me to work that much and create that much while not being able to recharge from travels and other people’s energy flowing around me. It was more cerebral and internal than fun and “out there” but I don’t regret it. I feel like I’ve grown from this,” she realises.

Once the pandemic hit, Shay was overwhelmed with ‘a huge paralyzing wave of fear and uncertainty,’ as everyone else would. Going into a project that she had to start over would give anxiety to the best of us. However, now that ‘Solaris’ is out, Shay offers a more optimistic outlook of the situation: “On one hand, having to work on my music was the best thing that could have happened because it kept me focused and it was the safest escape. But I didn’t enjoy not being able to travel and present new music. I had minimum feedback on the new sound. It takes a lot of confidence to go for something unexpected musically and not even have much guidance through it”. Listening to ‘Solaris,’ I can confidently declare Shay Lia sounds and feels like she found herself and her new sound despite circumstances.

The entire ‘Solaris’ shenanigans started when it called for a full revamp when Shay was in West Africa, enjoying Abidjan. Back in January, before life was easier, Shay was living life, appreciating local beaches and became exposed to different types of music. That’s when she knew she had to rewrite the EP completely. Shay explains: “I just knew I had to follow my intuition. It was a challenging process. I didn’t personally know any producers personally that were doing the type of music I wanted to try. I had to start from scratch, and educate myself on other music scenes and try to get these dope producers to work with me, which took me a while.” Now ‘Solaris’ represents a concise, sonic and visual narrative of Shay’s self-discovery.’

“I’m discovering myself while you’re discovering me,” Shay tells. “I discovered both that I am good at what I do and that I had gained a lot more skills than I thought other the past 2 years. I’ve directed all of my photoshoots. I’m the A&R of this project. I’ve produced and directed all the content so far. To see it all coming together lately makes me feel proud because I remember when these were only pieces of my vision. Now it’s all ready for the world to see. I realized that I could do anything, and I’ll probably keep on exploring and extend my style and skills”.

It wasn’t any different from the EP artwork. Shay Lia had a vision, and the ‘Solaris’ cover art portrays perfectly what the project means to her. She collaborated with Jeff Manning, a Philadelphia-based Graphic Artist that has also done the artworks for ‘All p To You’ and ‘Love Me Love Me Not.’ Shay explains how she worked towards returning back to her essence: “I could see the water and the colors, so I’ve guided Jeff through my vision. After seeing the first version, I realized that it lacked an element, and then the planets came to me. They best illustrate the name of the project, SOLARIS, which means ‘of the sun.'”

“I was inspired by the story of a Japanese goddess of the sun, Amaterasu. Grace Jones’ video for “Love On Top Of Love” was also a huge inspiration. We perfected it by playing with the color’s intensity, adding some sort of visible aura around me to give it a more mystic, spiritual element. It’s a way for me to show my connection to the sun and how recharged I feel under its light. The eclipse and symmetry are giving the art cover a tarot card esthetic that I love. I wanted the sun to be the star or the eclipse, not the moon, as it’s often the case. I love this cover. It’s the PERFECT illustration of the sound of this project – female energy, my intimate relationship with the sun and the moon, and where the vision for this new chapter started, in Africa, by the ocean,” Shay circles back to where it all started.

This week, Shay Lia released the visuals for one of the tracks out of ‘Solaris’ – ‘Love Me Love Me Not.’ The music video brilliantly mirrors the warm, sensual blend of pop and afrobeat sound that brings lyrics to life. With the director Caraz, Shay worked hard to share ‘a visual that showed freedom in movement and sensuality.’

Shay Lia takes us behind the scenes of the video shoot: “I had such a wonderful day at the beach too! Fun fact, this is actually a Canadian lake in the video – I didn’t even know these lakes could look like the ocean! I felt like I was on mars the whole day we were there. My brain was seeing a beach with waves and soft sand, but the water was not salty at all. With these dreamy colors, it truly felt like I was in a new dimension where oceans are not salty”.

On ‘Solaris’ you can hear songs like ‘Irrational’ that is about how irrational people can be when they’re in love. On ‘Mais oui,’ you’ll get to hear Shay Lia sing in her mother language, French, celebrating women’s strength. The smooth and confident ‘High Up’ talks about sensuality and sexuality. She also tries to offer a big positive affirmation that everyone so desperately needs right now with ‘All p To You’. Lastly, ‘Love Me Love Me Not’ shows a woman’s perspective of being friend-zoned.