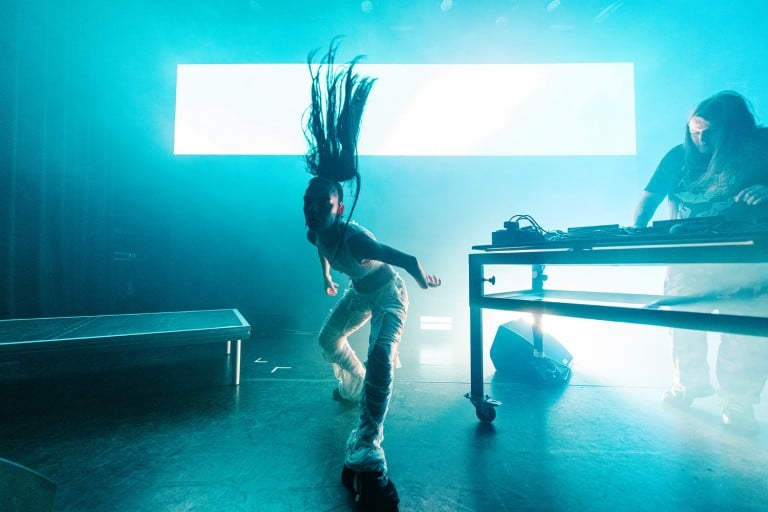 Rewire 2022: A Weekend of the Unexpected

Noctis Magazine had a peek of the much-anticipated Rewire Festival this year, which took over 12 prominent venues in The Hauge (The Netherlands, near Amsterdam) from the 8th to the 9th of April – and they delighted European music enthusiasts with advanced technical sound.

Rewire is a multi-venue city event devoted to presenting electronic music and its many forms, performers, and sounds. This year’s event kicked up with top-tier acts including Marina Herlop, Aya ft. Sweatmother, Helm, Tirzah, our weekend favourite Blackhaine, BFTT, Kode9, and the one everyone was waiting for… DEBONAIR.

Act Marina Herlop is a conservatory-trained composer, soprano, and pianist who was the festival’s inaugural performer. She has lately broadened her sound set of tools for the night to a more cybernetic side of music. Marina experimented with konnakol syllables and Karnatic rhythms using processed human voices and synthetic electronics.

Then it was time for aya and Sweatmother to hit the main stage at PAARD. Producer aya (previously known as LOFT) has mastered the art of bending her poetry, vocals, and production talents into freakishly beautiful electronic music, as she undoubtedly demonstrated during her set at Rewire 2022. By merging the growling low-frequency ranges of dubstep, grime, and drill with alienating sound design and hyper-personal lyrics, aya warped her club music beginnings into a nightmarish realm of art and critique.

On a Friday night at PAARD, hardcore ravers emerged as the tougher, more melodic music ascended. Tirzah performed in room one, heightening the night’s tensions with her seductive, harmonic warm-up act.

Then we headed to room two to witness the much-anticipated Blackhaine perform creative genius on stage. Has re-established himself as one of the fiercest champions of British counter-culture as a performer, dancer, and musician. A wonderful interdisciplinary artist who expresses British despondency and austerity via captivating and dramatic music, dance, and video work. On the night, he and his two colleagues musicians changed the mood of the entire event and transformed it into a moshpit, channelling his old British customs.

Not only that, but Eartheta appeared during the concert to energise the audience, jumping off the platform into a dive and being carried throughout the room like the Mama Racha she is!

Along with music, the event featured several installations, film screenings, and even collaborated with fashion label Carhartt for a Saturday afternoon of daytime partying at a local record shop named 3345. This was a special moment for Noctis Magazine, particularly when they played Fergie’s famous “London Bridge.”

Saturday’s best performances began with Eartheater feat. LEYA and her friends led us on a gliding voyage between tranquil and stormy soundscapes. Following his co-set with Tirzah the night before, Cobey Sey added a whole new East London vocal flavour to the event, evocative of our magazine’s city.

Many of the day’s musicians were perfectly suited to the festival mood on Sunday, bringing the weekend to a jubilant close. FUJI|||||||TA, a Japanese sound artist, performed on stage with his hand-built pipe organ. With eleven pipes, a blacksmith’s air pump, and no keyboard, he is one of the most distinctive performers on the Rewire roster.

Then, from New York, Debit introduced avant-garde production methods into the mix of experimental and frequently club-focused music. Her stage set-up was particularly appealing to us, as she lighted sage and other herbs while performing, providing a feeling of spirituality with the music. Speaking to her at the festival she comments, “when an artist is being their authentic self on stage it works best, especially with electronic music, there are so many elements that people forget and it’s important to showcase your personality within that performance.”

Caterina Barbieri, a well-known Italian composer, closed the festival on a high note by performing at the Amare concert venue. Her technical awareness of sound is unquestionable, and she did not hold back on the night.

Already missing the eardrum slaps, dark chambers, and terrifying strobe lights, we have memories that we will remember for the rest of our lives as a result of Rewire 2022.