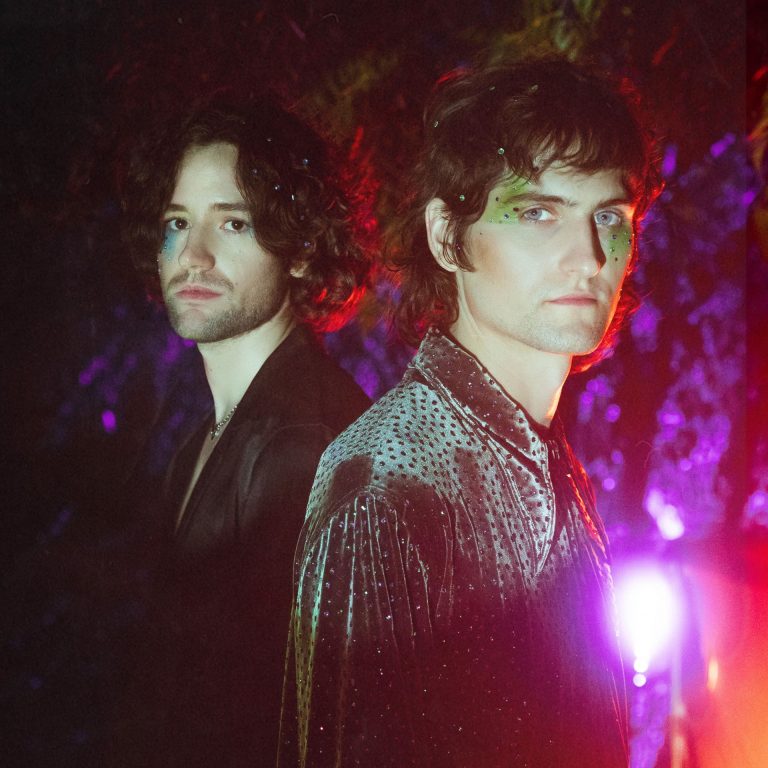 Sports envision a new world on ‘Get A Good Look, Pt. 1’

It’s been less than one hour since the United States crowned its new president, liberation is in the air and an astronomic weight has lifted. Cale Chronister and Christian Theriot of glamorous dream-pop duo Sports would usually celebrate such an event by digging out their finest garment and painting the town till sunrise. Instead, the pair reside in the comforts of their Oklahoma homes, on Zoom to myself, flaunting stylish new Sports merchandise that arrived in the mail this morning.

Cale exhales: “I just feel relief”. You can hear it in his voice, a sense of optimism for the future, a feeling that a lot of Americans are sharing with each other right now. In fact, it’s about the only thing we’re all sharing together amid current worldwide restrictions. “Every state is completely different, it’s quite weird”, he explains, detailing the polar opposites of California where he lived up until recently and Oklahoma, the place where both himself and Christian grew up as childhood sidekicks.

Making music together since the ages of thirteen and living rigorously through ample band names throughout their adolescence, ‘Sports’ is the one that ended up personifying the duo – establishing an instantly sleek and iconic brand. Hard to stalk online, however? Horrifically. “When we made ‘Naked All The Time’ we were still sticking to this high school band name”, they admit. “…which we’ll leave unnamed, so that no one can discover our embarrassing pastime”.

Christian is responsible for the ‘Sports’ alias. “We were, for obvious reasons, a bit dismissive at the time”, he divulges. “We loved the name and knew it probably wasn’t a good idea, but then just couldn’t think of anything else we liked so went with it and dealt with the consequences”. Notably, ‘The Encore’ was one of many names swept under the carpet during the era in which PureVolume and Myspace reigned – a pastime where young Cale and Christian would produce aural concoctions on Garageband and Logic.

The psychedelic, synth-orientated creations we hear in Sports today are infiltrated from glitzy David Bowie to The Beach Boys. “I think a lot of it’s subliminal”, Cale claims. “Even if you can’t hear it in our music”. For their recent single ‘The Look’, Cale submerged into French disco and European funk, “just to hear how they did it”. Upon discovery, they decided to give it a whirl by incorporating these new sounds into their own projects. “We tried to blend a straight groove with all of this insane shit around it, which is what our music sounds like. All these weird little noises that aren’t like a classic hook, quite unconventional and absurd”.

‘The Look’ was inspired by a passing comment a stranger made in the streets by mistaking Cale as a model. Fascinated to know where both their styles evolved from, Sports report that it’s constantly changing and transforming. “Even when I look at myself from six months ago I say, ‘why did I think that looked good?’” Seen now flaunting stunning tailored uniforms and intricate blazers within visuals and on stage, he pictures his current style as “seven-year-old Cale going to church”.

On the topic of visuals, ‘Never Know’ kickstarted the duo’s act of peculiarities within music videos, in which they “threw shit at the wall to see what sticks and pairs well with its lyrics” – a notion that’ll carry them through this new era. “There’s a lot planned, but at the same time it does feel like we’re just trying things”. Working with Mortis Studio for the mystifying album art, the agency has taken full reins this time around. “I think it’s a very new look for Sports: bright colours and a lot of, I don’t want to say chaos, but eclectic stuff everywhere”.

The Tulsa twosome envision a new world on ‘Get a Good Look, Pt. 1’ – the first installment to their sophomore escapade. Soaked in irrepressible synth and hypnotic high-pitched vocal arrangements, Pt. 1 is introspective and explores admitting faults and self-analysis. “I don’t know that I have a message for other people”, Cale outlines what he wants listeners to take away from Pt. 1. “It’s more of me trying to say what’s on my mind and trust the process that, if I’m thinking it, then there’s probably a lot of people that will relate to or understand it”. It comes down to the beauty of music, too. The lyrics to most of these songs won’t make perfect sense to everybody, but to be able to take what Cale sings and contextualise it to our own lives is the band’s main focal point for this era.

‘Get a Good Look’ has been split into two parts to allow Cale and Christian to work on their craft at a more methodical pace. Pt. 1 is to coexist on its own before Pt. 2 arrives and the two link together with songs that bleed into each other. Pt. 2 is about the refusal to apologise, asserting oneself and bidding farewell to “Mr Nice Guy”.

The majority of the tracks on Pt. 1 took a year and a half to fully come to fruition from the early demo stages to their glossy finished product. Flying back and forth from LA to Oklahoma extended the process marginally, albeit two songs in particular, ‘Call Me Anytime’ and ‘Don’t Get Me Started’, were shells of an idea from a jam the duo did at the end of their Pt. 1 sessions; needless to say they were briskly developed to make the cut.

‘Tell You Something’ marks a comeback for Sports; a reintroduction. “It happened pretty fast”, claims Christian. “[The track] happened when we were getting ready to release a single, we were at the last 10% with it and it just came to life… It was the song that had the closest transition from ‘Everyone’s Invited’”.

“In the midst of making ‘Everyone’s Invited’ I was going through some pretty serious depression”, Cale acknowledges. “I remember thinking that I could’ve given it more”. Pushing the idea that Christian and Jacob (Christian’s brother) “saved that record” due to Cale being emotionally unavailable at the time, whatever he did lack on that record, he’s determined to make up for in ‘Get a Good Look’.

“I could’ve argued more. I just could’ve been more confrontational about certain things. It was me realising I was in a hole this whole time. I went on a rampage and wrote ‘The Look’, ‘Baby Baby’ and ‘Never Know’ – all in the same week. I knew that in this next record I had to give it everything I have. I had this energy to be more extreme”.

Allowing nothing less than 100%, ‘Get a Good Look’ encompasses a renewed attitude for Sports. Christian observes a rejuvenated Cale: “I definitely feel like these are some of the best melodies and lyrics that I’ve heard him write”.

As they begin to conclude the glistening second part to the record, Cale and Christian see themselves doing something quite out of the ordinary in 2021: “Playing a show. That’s all I want to do”. Christian is adamant that, after the deprivation of live entertainment last year, there’s beginning to be some light at the end of the tunnel. Cale yearns for normality: “To be around people without being afraid, even just a little bit”.

They’ll soon reach to the back of their wardrobe, pull out their most embellished outfits and grace the stage once more, only this time with a refreshing new outlook and an extended catalogue of grooving material to celebrate. And best believe we will be celebrating.