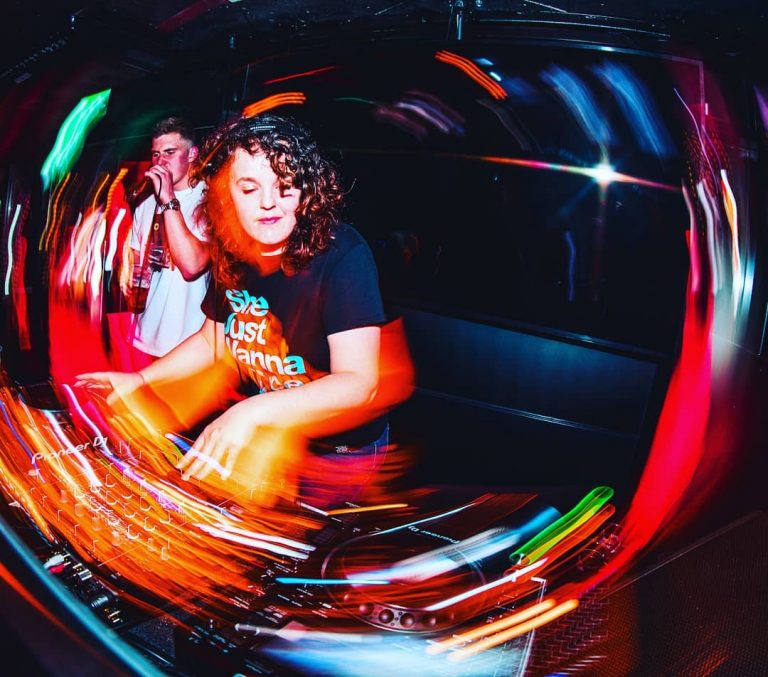 Opening up the Med School tent for one last time in what was their final stage takeover at Hospitality in the Park 2019, we caught Sweetpea just after her live set and sat down to talk drum and bass, what it’s like to be a female DJ, and having faith in yourself.

Let’s start at the beginning – tell us about how you came to the drum and bass world.

I’ve been DJing since I was about thirteen years old. I was hanging out with one of my mum’s friends who had a basement with all her UK Garage vinyls, and I said “wow, what’s that?” She told me to come and have a go, and that just made me want my own.

So, I got some decks when I was thirteen but I was trying to scratch a little bit too early and didn’t have all the right equipment. I put it away for a little while and then when I got to eighteen, I started to go out, listening to drum and bass, and realised that I absolutely loved it – loved the energy of it. And through a few friends I got back into it and realised I wanted to try again, that I wanted decks again… and it just went from there.

Where did you grow up? Did that have any effect on what you listened to and your tastes?

So I grew up in Watford, which is kind of north west London. It was predominantly Happy Hardcore where I grew up but I always enjoyed drum and bass generally, the high energy of the music. And it was one of those things – you know, you’d start going out to town when you got to eighteen and it was Vodka Revolutions, and they’d always play the classics. You’d drink lots of Vodka, lots of funny-looking shots and they’d always play like something like Original Nuttah or Tarantula. Those tunes, every week – week in, week out.

Then a friend of mine, who I’m still friends with now, realised how much I liked drum and bass and said “Why don’t you come to London with me?” And it all kicked off from there.

A: What, or who, inspires you?

S: I love listening to everything but drum and bass, sometimes. It’s good to take inspiration from different genres, and I massively enjoy that at the moment there’s a big UK soul movement. I don’t know what you want to label it as: UK Neo Soul, Electronic Soul… but it’s artists like Children of Zeus, I AM DDB. I love my Jazz as well, like Harley Blue. Nubya Garcia is amazing.

Growing up there was everything in my house – my mum used to listen to Reggae to Motown to Rock music. I used to skateboard when I was younger, so I’m also into bands like Foo Fighters, System of a Down.

It’s nice because I like all all types of drum and bass, so it makes things like this amazing – I can play at something like Med School or Spearhead or Hospitality… and then on the flip side can play for someone like Rupture, or Renegade Hardware. It’s really fun to be versatile, to play for a range of label club nights, and I try to get a bit of everything in my set. Full spectrum.

It’s not healthy to stick to one specific type. And some people can’t believe it, they’re shocked that I don’t listen to drum and bass twenty-four seven. Of course not – there’s so much more out there!

A: Do you have a favourite emerging act?

S:There are so many great acts coming out of Manchester and Leeds at the moment – there’s a great guy, Slater, and obviously Frenetic and Euphonique are brilliant. Indika is absolutely amazing.

Label-wise, Delta Nine are a great up-and-coming label and Overview are producing some excellent music as well. Who else? There’s quite a few people killing it at the moment, actually; it’s wonderful because drum and bass is in such a good position at the moment. RMS is another good one. I’m blanking now… literally when I’m going to bed later on I’ll think “shit, should have said that person and that person.”

But for sure all the fresh women that are coming through, like Dilemma – and of course, Lens is amazing! It’s brilliant to finally see female empowerment being pushed.

A: Now, one about you. How do you prepare for a live set? Do you have any traditions or rituals you follow beforehand?

S: One of the first things I do is think about who I’m playing to. And then, obviously with buying music and getting promos, my downloads folder gets quite big – it can get overwhelming sometimes. I try and group it into months, and then I’ll organise by the different kinds of sub-genres; Liquid, Jungle, Rolling, Techie, Minimal, Dark.

It’s great because I roughly know where everything is on the USB and I can skim through it like that. Sometimes if I’m playing for a specific night then I’ll have music curated for that, but then I’ll see if these people are really feeling this kind of sound and I can flip back to that folder.

I think, like everyone, I try and stay cool, calm and collected. Then I’ll get to fifteen minutes before my set and I either go silent or start shitting myself. I think it’s still really good, after all these years, to be nervous. It shows that you still care, that you’re passionate and you’re excited for it as well. And I did that today – I was fine. I was like, “yes, this is cool, I’m just going to rock up, it’s going to be beautifully sunny…” And then as I’m getting to the gates, this feeling overcame me and I had a moment where I realised “oh, shit I’m playing in a minute!”

And it was great, the set went brilliantly; my good friends were here, and it was really lovely having my mum there in the audience as well.

A: Leading off of my last question, I read another interview with you talking about how when you do your live sets, you just do it there and then – you don’t plan it. Is that how you’re still working now?

S: Yes. I mean, when I was when I was younger I used to, not pre-record, but I would have my list. I would pre-curate my set, basically. And doing that I came to realise that it would never go to paly; you’d miss cue points, and I don’t know if other people are like me, but I’d get myself into a whole fluster because it would feel like it’s all gone wrong. I would start flapping. I’m a proper flapper.

But actually, it’s this whole thing of just feeling the crowd. So now I usually plan the first three tunes, and then it’s all freehand. I’ve got like, fifty megabytes of music on me; there’s going to be something for people there. And if you’re playing with some nice Liquid, why not fuck people up by chucking a dirty tune in there? And suddenly you’ve got everyone’s attention. Or sometimes, you need to bring the energy down to build it up again. There might be a track in there and you realise that you haven’t played that for ages. I guess it’s a little bit of selfishness on my part too, because sometimes I play what I want to hear too. It’s just about reading your crowd.

A: If you could go back in time, what’s one thing you’d tell your past self?

S: Oh wow, that’s a question isn’t it? What could I tell myself? I like that.

Just keep going. Have a bit more faith in yourself.

I don’t know if it’s just a case of being a woman; we’re judgmental, so self-critical, doubting ourselves and worrying that it won’t work out, worrying that people won’t like what we do. I’d tell myself to not give a shit and just do it; it’ll be alright.

At the same time, there’s been many times when I’ve done free gigs when actually I should have asked for some money – things like that. I’d maybe be a little bit more business-savvy about it.

But, on the flip side, I’ve always done the music because I love it. At the end of the day, that’s what we’re here for and what we should be doing it for.

Have faith in yourself. Don’t worry. It’s going to be alright.

A: For women who want to be where you are, what is your advice to them?

S: Keep pushing. There’s this huge movement for equal rights for women, especially in music. People are finally listening to women and realising that women are around – I mean, we have been here for fucking ages but you know, nice of you to finally realise.

So you have to keep pushing – get mixes out and heard; send them to promoters; get criticism, get feedback – just get your work as out there as possible.

At the end of the day, the worst someone’s going to say is “no”, or they won’t listen to it. Or maybe they will listen to it, maybe they’ll send it to someone else or they’ll give you some feedback.

Don’t be afraid to do it, that’s the main thing. You won’t know until you try, so fucking try.

A: Final question, what’s next for you?

S: Well, it’s been an absolutely amazing festival season, with Hospitality in the Park 2019 just about finishing it up. I played at Sun and Bass this year and at Hospitality on the Beach as well, which were both incredible.

I’ve got some music coming up with Ronin Ordinance, which will be a bit more Minimal/Tribal, and a collaboration with Reckless coming out on Dispatch Recordings in a couple of months. I’ve got a couple of bits in the New Year; some gigs set up already and some more work with Spearhead Records, which I’m hugely excited for. I’ve got a few more gigs to close the end of the season with Hospital – Masked Ball, and I’m also playing for Makoto at Studio 338 in a couple of months. Excellent end to a beautiful year.

Sign up here for updates about Hospitality in the Park 2020.