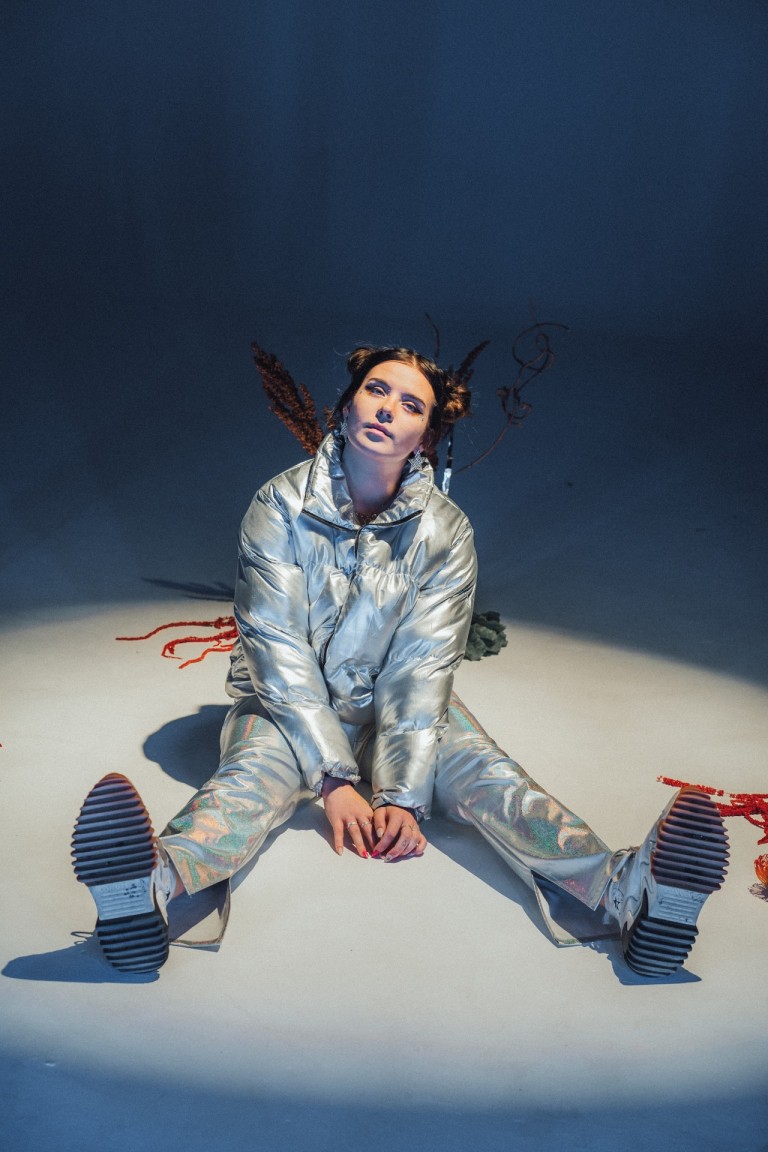 From day one, Irish-raised and now London-based April has possessed an essence of power within music that finds her among artists storming 2022.

Making her music debut in 2020 with the release of New Conditions and Luna, April has continued to surprise her fans with the twisting and turning of genres and productions. From the slow-burning alt-pop and popsicle hooks that put her on the map back in the day, April is now turning to the sounds of hyper-pop drum and bass, playing on to the influences of Charli XCX & Shygirl and now traveling through her latest mixtape Starlane.

With hit singles ‘54321’ and ‘Impossible’ already making an impact, Starlane tells the story of her move to London from the small town of County Kildare. Yet whilst daunting for many, April’s seven-track work is cathartic and honest, to say the least, as she weaves from the night outs to the Sunday strolls of the next morning.

Following the release of her latest mixtape Starlane, Noctis sits down with the ever-evolving April about her latest project, her changing sounds, finally making the big move in London, and what the future holds.

Good morning, how are you and congratulations on your latest release, ‘54321’ – what have the past few months entailed?

I’ve been living in London. I’ve moved to a new apartment with friends, both artists, Dylan Fraser and Matilda Mann, so it’s a very creative household and fun. That’s been a nice change from not living with creative people. And usually, I used to do a lot of sessions constantly, but I’ve been taking a break from writing for the last whilst to focus on being creative in other ways. It’s done me well and allowed me to focus on releasing this music. It’s been great!

Breaking onto the music scene back in 2020 with multiple projects to now teasing a new venture, how would you describe your rise and your journey in music?

Slow and steady, taking my time and also a lot of change. I started with the mindset that I wanted to be an indie artist, and obviously, that’s something I like to keep in mind. Now going forward, as well as my music taste changes, I want to be an ever-changing, evolving sound-wise artist because right now, it’s a lot more electronic and pop-driven. But my indie roots and songwriting are still there because I literally listen to folk music constantly. But I think my rise and journey in releasing music; that’s been a big part of it.

Speaking of your rise and talking of some of your fond memories of dreaming of going on X Factor and writing songs of heartbreak at a very young age, what truly inspired you to become an artist?

I think it has always been my number one passion. But I’ve said before, and I think it is definitely true, like other artists that were doing it DIY at the time, I think 2020 was such a time where everyone was trying things, and the whole bedroom pop scene was so big back in 2019 & 2020. And I was obsessed with it.

I had the resources to make music, and I was like, okay, I guess let’s do it. It started with posting the songs on SoundCloud and here we are; it happened naturally.

Forging a new path in London and now delving into the routes of indie pop and drum & bass as you’re inspired by the likes of The Japanese House, what made you take on a new route?

I like to continue to keep trying new things. You know, it’s one thing, not that my old music didn’t work, I love it, but I like so many different genres of music. Why would I focus on one thing when I can bring in new elements? And then also, that was the music I was loving and listened to at the time. I got completely obsessed with Charli XCX’s locked-down album How I’m Feeling Now, and that inspired this mixtape; you can hear so many elements of it. Also, these past few months, going out, and changing from living in Ireland and the UK were hectic and crazy. You can hear that in electronic music, I think more so than a singer-songwriter in these songs.

Currently, In one sentence, how would you describe your sound?

With a new project around the corner and already teasing fans with singles, ‘That Feeling’ and ‘54321’. How excited are you to release the overall project, and what do you hope to achieve from it?

I’m more excited and most excited about this project than I’ve ever been. Just because it’s so new for me and I’m finding a sound that I want to live in. And what I want to achieve with this project is to put myself into a world, show my place among other artists and make a name for myself. Show that I can make something and start a new excitement around my career.

From the title ‘Starlane’, opening yourself to a new chapter and sharing stories of heartbreak, liberation and love, how did the mixtape come together and the creative process of the tracks?

So, I’ve never really got into a project being like, okay, this is the concept I’m going to make everything around it. I want to do that one day for an album or something. But for my past mixtapes / EPs and this mixtape, it’s been natural in a way that I’m writing about the same things because I’m going through them. And for this, it was over a few months, maybe four months of working with Risc who’s a producer whose studios in Star Lane, and we started making these new sounds, and it felt exciting as it was how I was feeling. Then I’d go to Star Lane Station, and at the time, I was like, what a weird name, but it sounds like the music we were creating.

It was after a breakup, and I was seeing somebody new straight after, and I was living in a new city, making all these new friends, and it felt like a crazy time.

I know this is a dreaded question, but what is your favourite track, and why?

I’m going to give you two. My favourite, I always say, is ‘Distraction’, because it’s the most chill of the mixtape and feels very much like me; it’s very dreamy. And the actual songwriting on it is so special as it has personal meaning to me. Then my other favourite song is ‘So Good at Being Lonely’ because though it’s a sad song, it’s very much a pop anthem where you can have fun.

Already worked with a multitude of artists and producers; whom would you love to collaborate with in the future?

Mura Masa, Flume, James Blake, and then there are some cool electronic producers right now making that kind of indie-electronic, alt-pop music that I would love to work on.

On the other hand, if you could bring three music icons to a dinner party, dead or alive, who would you bring?

As you endure the highs and lows of the music world, what has been your number one learning perspective of the music industry, and what do you want to share with aspiring artists?

You have to be very sure of yourself! And be your number one fan and back your corner, which is hard. Though I can’t say I do that all the time, when I do, that’s when I feel like I’m getting the most out of everything.

Let’s not forget you got to believe in yourself.

What is your biggest pinch-me moment so far?

The biggest pinch-me moment has been going to LA for the first time and meeting artists that I’ve been inspired by and hanging out with them and it is a normal thing. And I was like, how have I gotten here? Like, how am I here, doing what I love? It’s also even the simple things like living in London; I wouldn’t be able to do this if I wasn’t making music.

Continuing to cement yourself within the music scene and preparing to let loose with your next mixtape, ‘Starlane’, what does the future hold for April?

The future holds big things. I don’t know what they are yet, but they’re going to be good. We’ve got a lot of music that I love. And I’m really excited to release, and I think, you know, I want to make a visual world, and I think it’s going to be exciting; making some good art.