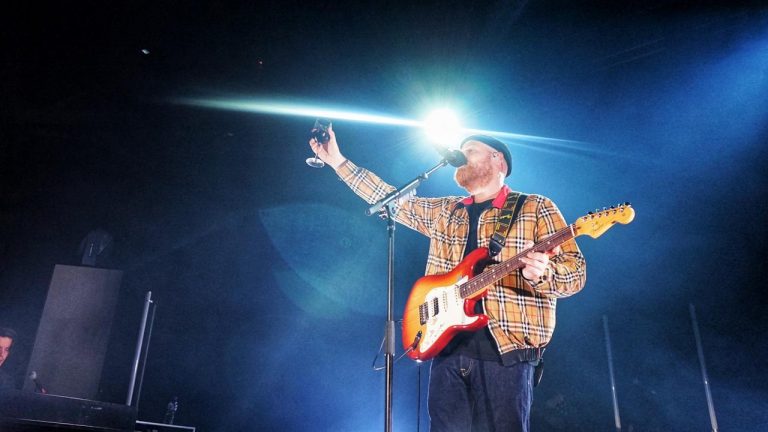 Tom Walker At The Roundhouse

Minutes before 9 pm on a Wednesday, people queue up to get their drinks to jazz up the show at the Roundhouse. Lights go down, the stage is lit up and the main act of the night Tom Walker sings the first few notes of ‘Angels.’ As soon as Walker makes an appearance, people run off from the bar and look for a spot to enjoy the Brit Awards winning artist.

The Scottish singer/songwriter had a hell of a year, gaining success wherever he goes. Ever since the March release of his debut album ‘What A Time To Be Alive,’ Walker established himself as much more than just a one-hit wonder with ‘Leave A Light On.’ His biggest ever show at the Roundhouse in London had everyone moving and proved him to be the next Ed Sheeran of music.

Standing in the middle of the stage with a guitar wearing a Burberry workwear jacket and his signature black docker cap, Walker is ready to entertain each and everyone in the venue. Next up is ‘My Way’ and ‘Walk Alone’ featuring Walker’s favorite Rudimental that has the crowd lifting their drinks and singing along.

Now that the audience is electrified and you can only see smiles around you, Walker slows it down with what he proclaims is his favorite ‘How To Sleep At Night.’ Gently approaching the song that Walker wrote after he got his heart broken when he was only 19-years-old after a five-year-long relationship. His delivery of ‘Fade Away’ is as raw as you can get.

Being from Scotland, after moving to London, Walker recognizes it is enough of a show to walk around the streets of London and observe people. This exact realization managed to get poetically translated into a track ‘The Show.’

Not many artists do this, but Walker gives each song a little introduction or a backstory as to why he wrote it. The following one was accompanied by Walker complaining about Brexit, Donald Trump and the state of the current news system. While speaking, you can hear nods from around you. This frustration is a familiar feeling among the city. Walker sums it up in ‘Dominos.’

After dynamic ‘Dominos,’ Walker thanks everyone who supported his debut album and his other projects throughout the year. He also shares his constant feeling of shock after winning a Brit Award for British Breakthrough Act. He shows his appreciation with ‘Blessings’ encouraging the crows to be grateful every day for the life we’re living.

Then he dedicates ‘Play Dead,’ a song from 2016, to his ‘Day 1’ fans. Now off to one of the biggest hits, ‘Just You And I.’ Walker introduces this record by announcing he got engaged to the love of his life and reminisces on their long-distance relationship before their engagement. This massive hit got all couples at the Roundhouse close together singing the lyrics while staring deep in the eyes.

Walker exits the stage, but we all know the encore is coming as two bangers are still on the menu. Of course, Walker returns and plays ‘Not Giving In’ with a bit of a remix at the end. On this next one, all the phones are up and recording as Walker plays the beginning of ‘Leave A Light On.’ A record that probably put Walker on the map has the Camden venue shaking from the ground.

Tom Walker is a performer with a down-to-earth presence, entertaining story-telling skills and a beautiful voice we all didn’t know we were missing. If you’ve not already, check out Walker’s album ‘What A Time To Be Alive’ and tickets for his upcoming shows.