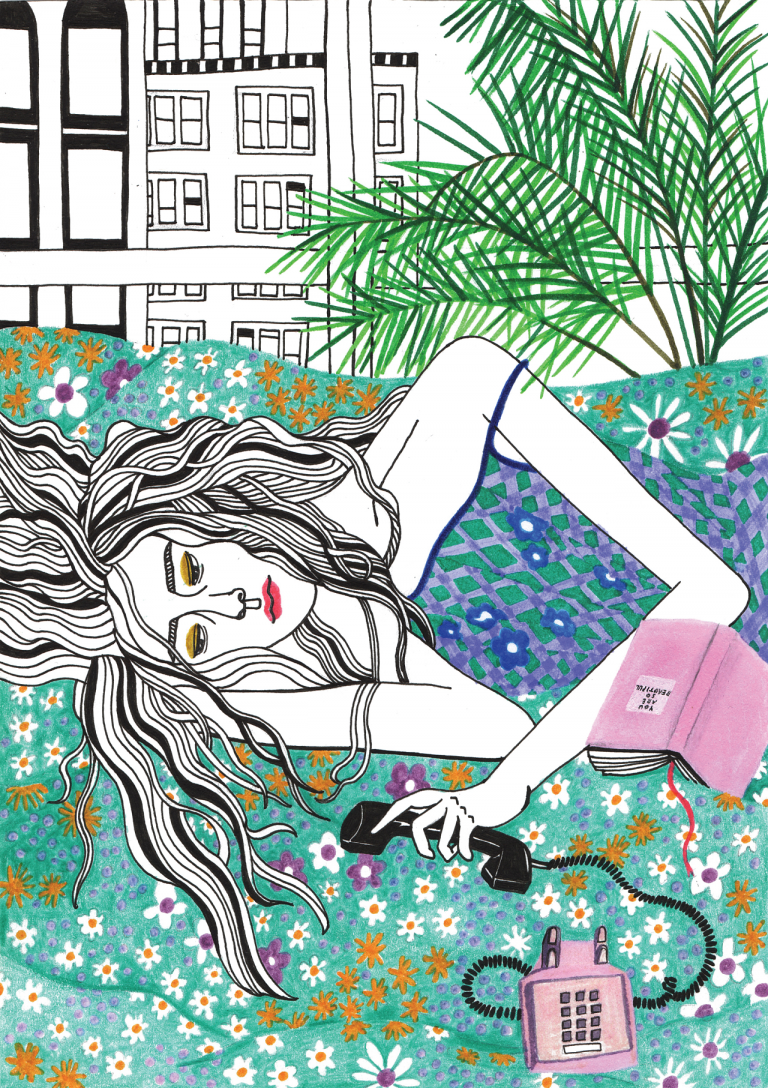 The type of heartbreak where you melodramatically believe that you will never recover, your heart skips a beat every time your phone buzzes but it’s just Dominos telling you about their new £9.99 deal. There you are curled up in a ball of duvet with the two men that’ll never leave you, Tom & Jerry, and good old trusty Spotify providing the soundtrack to your tears, who doesn’t love those Timeless Love Songs really…

So the time has come for me to pick myself up, and dust myself down – I refuse to limit myself from love, and wallow in self pity – we’ve all been there, but the truth is, for all the negative experiences you’ve been through, there are just as many positives if not more. It’s hard to figure that one out when your heart feels trampled on, your eyes are puffy, and you take for granted all the times you could breathe because now your nose is blocked and all you are getting is a high pitched whistle.

Illustration: Handbook to heal a broken heart by Debbie Woo

It’s not easy when you have what you think is a strong connection with someone, when you’ve spent days, weeks, months, or maybe years texting them, lowering your walls and trusting them. Then all of a sudden out of the blue they suddenly drop off the face of the planet (what Gen Z and Millennials have helpfully defined as, Ghosting). After two, three, four or five days of silence, it’s safe to say you’ve probably thought of every scenario of what could have happened to their phone, and to them; perhaps it malfunctioned, maybe they didn’t receive your umpteenth message, has someone died, have they?

It’s pretty easy to think that you were the problem, that you weren’t cute enough, sexy enough, intelligent enough, rich enough, mature enough, the list truly is endless. However, realistically it’s not you, it’s them… perhaps they weren’t ready for a serious relationship, they couldn’t handle your honesty and rawness, you were intimidating, or perhaps they decided against saying goodbye because they couldn’t face the ‘drama’ of hurting you.

But the thing for us to remember is that there are genuine people out there. People who love to love, who do want to build a bond with you, love you for all that you are as well as all that you aren’t, and who don’t run at the first sign of trouble. There are men and women, who are trustworthy, honest, faithful, dependable, selfless, and caring but also imperfect, yet despite their imperfections will continually do their utmost to create a relationship that is stable, meaningful, but most importantly, real.

Illustration: Handbook to heal a broken heart by Debbie Woo

We are all so clued up with our iPhones, Androids, and social media profiles that we are forgetting how to love and, respect one another. Everything now is so instantaneous and pleasure-driven, commitment is something that so many are terrified of, and instead of seeing each other like the beautiful, wonderful and complex humans that we are, we are seen as objects or conquests instead.

Love isn’t easy, being in a relationship isn’t easy, and being single isn’t easy – nothing my friend, is ever easy. So instead of us being so afraid of our emotions, how about we start taking a little ownership? We start talking to people with respect, and tell one another how we feel instead of continuously trying to mask our emotions.

Let’s stop sucking at this, and start loving without fear.