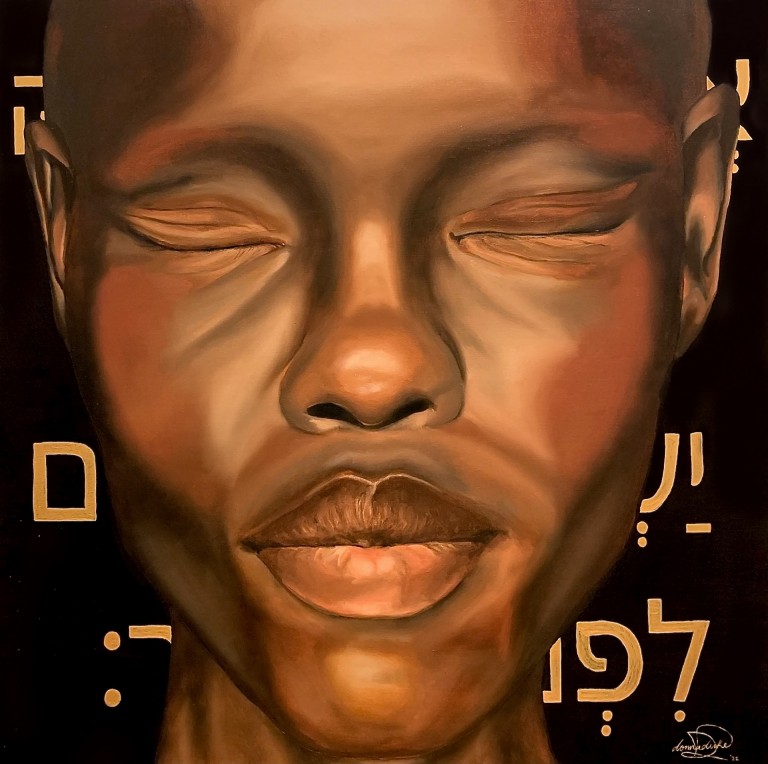 Being thrown into the adults’ world is expected but unpredictable; a move that induces loads of concerns. It’s hard to quickly change from teenage dreams to: ‘f*ck, I need to pay my bills’.

Donna Duke is on her journey, juggling between being a young adult and an artist. The 24 year old London based, Nigerian artist found her way to express emotion quite accidentally while painting a portrait of her niece to celebrate her first birthday. Since then, painting has reformed her way of existence, and helped her to cope with difficulties of self-expression, the fear of the unknown and the future. With her works, she brings zen, vulnerability and freedom of speech, all encapsulated within her visual narrative.

Now celebrating the successful exhibition ‘I AM & NOTHING ELSE’ in Victoria Island, Lagos, presenting breath-taking artworks all the while with a humble and gracious demeanor. The paintings she creates are truly alive. She shares the stories of people around her, she’s curious about other lives while focusing on her Nigerian heritage. “I wanted to learn about Nigerian culture, landscape as much as I could because I felt disconnected, living away for a decade,” she says while sitting in her London apartment.

Embarking on her personal journey, Donna’s main focus naturally revolved around herself; what she does and how she feels. However, through a process of growth and development, Donna found herself drifting from these internal reflections to explore the narratives of others, entering a new era of storytelling. “A lot of my art was dramatic and miserable. It was representative of that time. Eventually, I just didn’t want to talk about myself. I think I am okay for now,” she said. ‘Show Me Who You Are’ was a project she made, asking people in their early twenties: ‘What is the moment that changed the way you see the world?’, inspired by the moment that changed her way to see the world. “People talked about spirituality, religion, sexuality, sexual orientation. Everyone has such different moments of their life,” she says. The project itself brought consciousness and understanding.

Everyone is self-centred and forgets that everyone has the same amount or probably even more problems than you do. Their life is as important as yours is to you.

From there, Donna’s confidence grew, the more she created. Her most recent exhibition showcased a project which allowed her to find understanding and be gentle with others and herself. She made four masterpieces which were presented for a month in AAG: Affinity Art Gallery. Seen below, the inspiration for ‘Within’ was taken from her mother and sisters, who Donna admires as role models with superpowers who are able to take on the struggles of everyone else and keep going. “I am in such a selfish stage of my life and I don’t know how to have that energy to take on other people’s problems. ‘How do you do that?’ I was trying to answer that to myself and I couldn’t so for me it was just kind of okay,” she says. It comes with maturity, motherhood and life experiences.

‘Processing’ deals with duality. There’s no single definition of a human being that is used to describe them anytime, with no exceptions. “We are never truly just one person; we are different people to different things or to ourselves. People see us differently, there’s no one characteristic of a person so I wanted to capture that in a very minimalistic way,” she claims. Thin lines formed in the shape of two faces mirroring each other, but being different. It shows the power of imagination and flexibility of human existence. We will never be defined.

I work a lot with gold leaf because I like to keep that at the back of my paintings as a motive of greatness, of excellence, especially black excellence and something that always remind that you are that, even though there’s talking about something vulnerable, emotional, and sometimes it’s little uncomfortable, there’s strength and greatness no matter the subject matter, but we are all just still human.

Spreading awareness and encouraging society to understand with the human experience is essential to her. ‘Seemingly Submissive Dreamer’ allowed her to search for the answers of previous generations; how they grew up and why they act in certain ways. “It’s a very religious society that I am from. The bible tells us to be submissive to our husbands, if you’re not, there’s something wrong with you. I don’t want to judge. I don’t necessarily agree. I had a lot of conversations with my mum about this topic because I don’t think it’s right but also, I wanted to show kindness to the women that came before me and have a sense of understanding.” That’s all they knew, that’s how they grew up. “There’s been so much discourse and so much disagreement about how women should act nowadays. Instead of being like: ‘you’re wrong, this is not how it should be now’, show kindness. Our generation wants their generation to see where we are coming from. I think we should also extend that and show gratitude to them, and try to understand where they came from in the first place and where they are now,” she claims.

‘Longing’ represents life’s doubts, uncertainty and pressure that comes with adulthood. Donna wanted to reassure herself and others that it’s okay to be confused and scared of what the future holds. The piece portrays a woman; natural, with no hair, eyebrows or lashes. In doing this, she wanted to define herself; how pure and innocent she feels when entering new life challenges. “We will never experience something that we’ve expected. When you’re a child everything is new to you. You’re a teenager – you have teenage problems, then you get to your first relationship and that’s new to you. And then you’re a young adult and that’s also new to you. So, you’re like ‘what am I doing’? You always question yourself because everything is so new and you’re not settled in whatever you are supposed to be doing,” she says. In the background she painted the biblical verse ‘Lord will never leave you’ reassuring her faith and reason to keep going.

Now she studying Arts and Cultural Enterprise at Central Saint Martins, Donna wants to pursue her dreams of being a giver and providing people with a space to create community after graduation. “What I want to do is to find the way for Nigerian artists to have a proper representation and foot in the doors so they can be seen by certain people because Nigerian artists don’t have that opportunity. The second one would be to allow the general public to have an inside view of their cultural and artistic scene because it’s almost closed off. There are not many cultural centres. There is a museum but it’s not taken care of very well. And we don’t have the same cultural landscape as, for example, Europe does. For me, that’s a huge shame. I want to bring it out to the masses. It’s sad but it’s an opportunity in the next coming years,” she admits. On top of that, she still wants to continue creating art and telling stories, it’s only a matter of time before her work is widely recognised for it’s talent and originality. With these skills and professional approach, there’s no other way; Donna Duke Studios will transform into something bigger and an essential the source of knowledge about artists from Nigeria. Whenever it’s ready we will visit, and you should too!