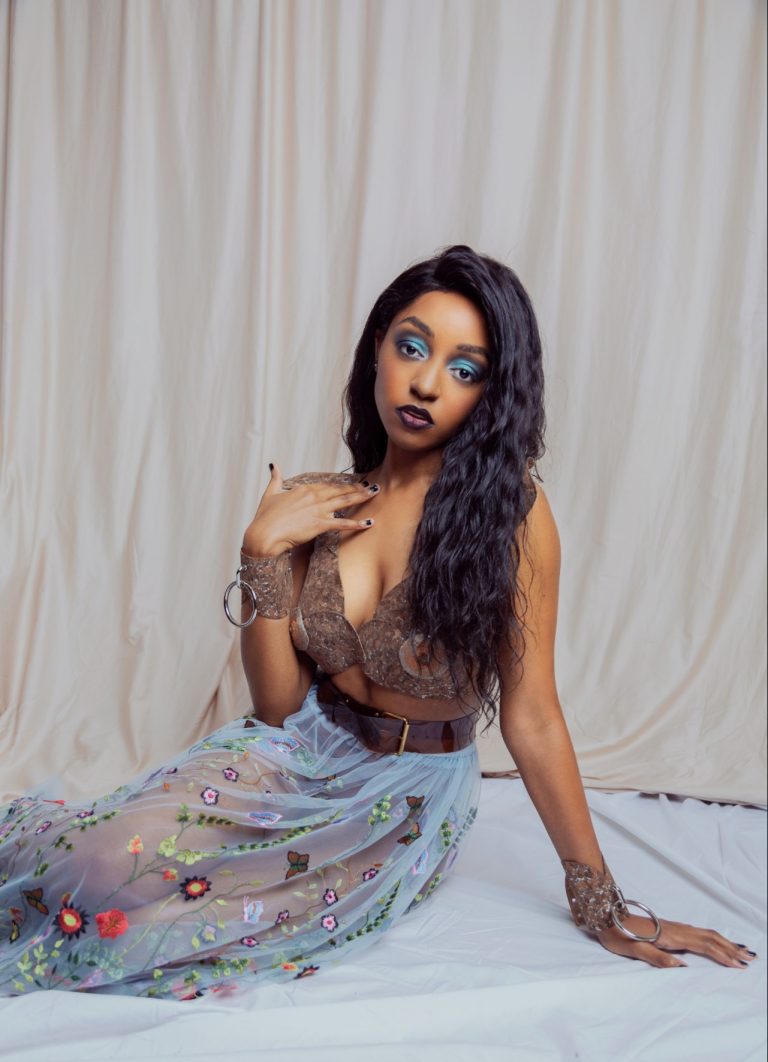 On a quick scroll down model and asexual activist Yasmin Benoit’s Instagram page, you’ll see a flood of powerful imagery with strong connotations to her activism. Utilising her social media platform to unmask common misconceptions of asexuality and aromanticism, Yasmin creates an open and profound ongoing discussion of the reality of asexual identities. Yasmin’s work as a lingerie model and creation of #ThisIsWhatAsexualLooksLike act as a collective force to debunk the visual expectations projected onto the asexual community, working towards a future in which not only asexuality and aromanticism are normalised and accepted, but intersectional acceptance will come with it.

During this time wherein the recognition and acceptance of the LGBTQ+ community is increasingly spoken about and normalised, Asexuality, referring to a person who feels a lack of sexual attraction towards others, is often still deeply misunderstood. International Asexuality Day, co-founded by Yasmin Benoit, in collaboration with other activists and organisations to take place annually on April 6th, aims to raise awareness and normalise all kinds of Asexual identities under the four themes of advocacy, celebration, education and solidarity. We spoke to Yasmin about what this means to her, her own experience of Asexuality and work as an activist and model, during Aromantic Spectrum Awareness Week, taking place from February 21th-27th.

The launching of International Asexuality Day must be a really exciting step for you, could you talk a little about what inspired you in the lead up to launching it?

It’s been a long time coming! I’ve been working alongside activists and organisations from across the world on this for almost a year before it was announced. The inspiration to create International Asexuality Day came from the lack of visibility that we receive in the first half of the year. We have Ace Week in October and we might get some mentions during Pride Month, but it isn’t guaranteed, especially for those in less liberal countries. Others had attempted to come up with ‘days’ in the past but it was nothing set in stone and nothing cohesive or inclusive. I thought it was important that we had something that united and highlighted asexual communities across the world on a date that works for everyone.

What do you think the biggest misconception about asexuality and aromantic love is? How do you plan to tackle these misconceptions?

There’s a lot of misconceptions about asexuality and aromanticism, which can be tackled by raising awareness, educating people, and just living your life as an asexual and aromantic person openly and unapologetically. For one, people don’t think that asexual and aromantic people can feel love, but there’s more to love than sex and romance. They think there’s something medically wrong with your mind or your body or both, they think your orientation is just an excuse to cover something else up, an anti-sex/anti-love social statement, just a bid for attention, the result of no one wanting you, you thinking you’re too good for anybody, or you not ‘finding the right person yet.’ You name it, I’ve heard it, even if it doesn’t make sense!

From outside of the community, one that’s particularly common was is the infamous “Do you/can you masturbate?” which is usually an incorrect way for someone to gauge how asexual a person is. I’ll get that question from people I barely know, it’s one of the first things that comes to mind. People think that being asexual means that you have no sexuality whatsoever – your genitals don’t react to contact, your body can’t become aroused, the mere thought of anything sexual causes you to implode. None of those things are true. From within the community, I get a lot of people asking me how they can know for sure that they’re asexual, which is a hell of a lot harder to answer than the first question.

Is there a specific moment you can remember becoming aware of your own asexuality or was it a gradual realisation?

The realisation was pretty instant, even before I knew that there was a word for it. I’m quite grateful that I was able to work it out at a young age. There was never a time where I was living like I wasn’t asexual or actively trying to be something else. I always say that I became aware that I was asexual when everyone else seemed to realise that they weren’t, or at least, I became aware that I was different. Of course, I assumed that whatever everyone else was experiencing would kick in for me as well, but it didn’t and that became increasingly more obvious as I got older when my peers were so sex-focused. I learned the word ‘asexual’ when I was fifteen and started using it from then onwards, if I thought people would be receptive to that term. Otherwise, I’d just say, “I’m not interested,” and they could come to their own conclusions!

Is there something you wish you had known or been told when you first became aware of your own asexuality that you would like to say to those who are now going through that same process?

I wish someone could have told me that the asexual community are literally just a bunch of normal people. The stereotypes don’t apply, the impressions that you might get from frequenting online spaces (which is likely to be the only space where you find many openly asexual people) isn’t necessarily an accurate reflection of how diverse the community is. There’s no asexual type, or asexual look. There are literally asexual people in all walks of life, just like with other identities. And being asexual is just one part of their character but it doesn’t define anyone. The sexuality you do or don’t have isn’t everything, and you don’t need to fit the term, only use the term if you feel like it’s helpful for describing you and don’t get too hung up on the semantics.

Your new editorial with Ada Couture is beautiful, could you tell us a little bit about how that came to be?

Usually, I end up on set with a predominantly male team so I was eager to do something totally different. I’ve been a fan of Ada’s work for years – especially her latex designs – and I really wanted to model some of her stuff. It turned out that she was interested in me as well and wanted me to shoot in her new Cork collection, which I thought was really different to anything I had done before, so I was definitely up for it. Then we got Camilla de Argento involved because I loved their work and thought it would be a fun experience to work with a queer photographer, and Margherita Lascala was a great make-up artist that Camilla knew. We did the editorial between lockdowns with Covid precautions. It was also really interesting getting to model designs with the designer actually there on the day. Hopefully we can all work together again in the future when it’s safe to do so!

The work you’ve done around intersectionality and #ThisIsWhatAsexualLooksLike is really inspiring, would you be able to talk a bit about why this is so important to you?

Intersectionality is important because we’re talking about a diverse community of millions of people; we’re all so much more than just asexual and those other characteristics influence our experiences, not just of asexuality, but of life in general. As an unambiguously black woman, there’s no way that my work couldn’t be intersectional and I wouldn’t want it to be anything else. I grew up never seeing myself represented, but I believe in being the change you want to see, and who better to represent me than myself? I wasn’t until later on in my journey that I realised how much my intersectional approach would mean for other people, given that I wasn’t sure that others would be able to relate to me very much. It turns out that a lot of people can and I’m grateful to have the opportunity to help fill a void in our visibility.

Asexuality is not talked about as other sexualities, what steps can non asexual people take in order to be a better ally to the asexual and aromantic community?

One of the key ways that people can help be allies is to help normalise asexual and aromantic identities. The easiest way to do that is by expanding your understanding of sexuality and relationships, which will hopefully lead to you being more inclusive and considerate in your conversations. Once asexuality and aromanticism is included in the conversation, they stop being “invisible” orientations and the communities become less invisible as a result. It’s helpful not to discuss romantic relationships as being the be all and end all of intimacy and connection. Take the emphasis out of it, don’t open conversations by asking people if they’re single or placing romantic relationships as the centre of gaining insight into someone’s life or character. Similarly, consider the language you use when talking about sexuality. When people treat experiencing sexual attraction as being fundamental to our existence and emphasise how “natural” it is, it can be alienating for asexual people and it reinforces this exclusionary idea that asexual people are inherently abnormal or missing something essential to being human.

The steps you’ve taken so far have been really great to watch unfold. Can you tell us what you’ve got planned next for raising awareness and normalising asexuality?

World domination! Well, not quite, but I’m definitely dipping my toes into as many ponds as possible to spread the message far and wide. At this exact point in time, my focus is on Aromantic Spectrum Awareness Week and International Asexuality Day on April 6. But you can expect to see my upcoming Ted Talk, some exciting podcasts and articles, maybe a different kind of literature, research, campaigns, and possibly some dabbling in the world of social policy. In these times, it’s hard to know for certain what’s going to happen but I’m hoping for good things on the horizon. Watch this space!