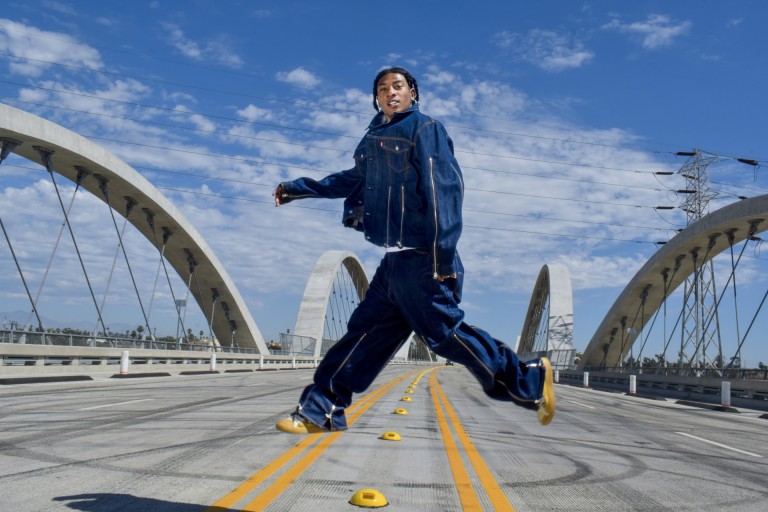 A Day in LA with Sasuke Maki

Having modelled for global giants of fashion, Sasuke Maki is steady on track to become one to watch in the modelling industry. Originally hailing from New York, Sasuke moved to sunny LA, determined to see his modelling dreams through, landing major campaigns with the likes of Puma, Nike, and Addias. Not one for staying inside the box, Sasuke Maki also began perusing his other passion, music, independently releasing a series of singles. Influenced by a myriad of genres from rock and pop, to rap and hip-hop, Sasuke’s singles ‘Sunglasses‘ ‘Ditch‘ and ‘Scorpio King‘ received praise for their feelgood vibes from a number of music blogs.

Stylist Jermaine Robinson and Photographer Jimi Kelly caught up with Sasuke in LA for a new shoot and interview. During the chat, Sasuke shares how his fashion career got started, realities of the modelling industry, his musical aspirations, favourite brands, and returning to school.

You’ve excelled in your career as a model, working with brands like Nike, Adidas and Mercedez. Did you always want to become a model?

I initially wanted to be a professional athlete as I played baseball and football ever since I was 3 years old. I ended up earning a full scholarship to high school and college. Unfortunately for me I got hurt. Instead of sitting there waiting to heal up, I continued to workout to keep physic and was jogging  around campus. The photography class saw me and asked if they could take pictures. The pictures were then put on tumblr and my popularity just started to grow from there.

What are your thoughts on being a model?

Honestly modelling is great, but you’re in someone’s else’s vision, posing exactly as they want you too with no real input. I always felt they use your likeness to increase their sales without giving you any chance to express anything. I’m a very vocal person who wants to be heard and understood, not just seen as a blank canvas.

When you are buying clothes what are your favourite pieces to shop for?

I can’t simply pick one piece of clothing but I’m very big on accessories, such as sunglasses, bags, rings and hats, I think they are major supporting roles for your super hero outfit.

Is fashion a big part of your life?

I love everything about fashion, I love the fabric, I love to design. I even look up the designers’ lifestyles to see where they got their inspiration. I personally feel fashion is the largest form of expression without speaking. Lastly, as weird as this is, I’m attracted to what a woman is wearing before I even look at her physical features.

What are your dream brands to work with?

I don’t have a dream brand, however I would say I’m into modelling brands and working with my friends’ brands, I’m also interested in the development of brands. My favourite brand is Gucci, always has been probably always will be.

What are your favourite pieces in your latest shoot with stylist Jermaine Robinson and photographer Jimi Kelly?

I would definitely say the oversized denim look, it gave me LL cool J vibes.

What advice would you give to aspiring models just starting out?

Honestly, have tough skin. Take care of your health. And honestly don’t let anyone, especially yourself, tell you that you can’t do it.

You’ve showcased your talents in music and modelling, what can people expect from you in the future?

I’m going to school to be a vet, I know that’s a bit left field but my daughter deserves security now. Until music modelling and acting are making me enough money to fund anything she wants in life I have to buckle down and multitask my ass off. But I promise you this, you will see me on all of your TV’s  and will hear my music on every corner you turn.