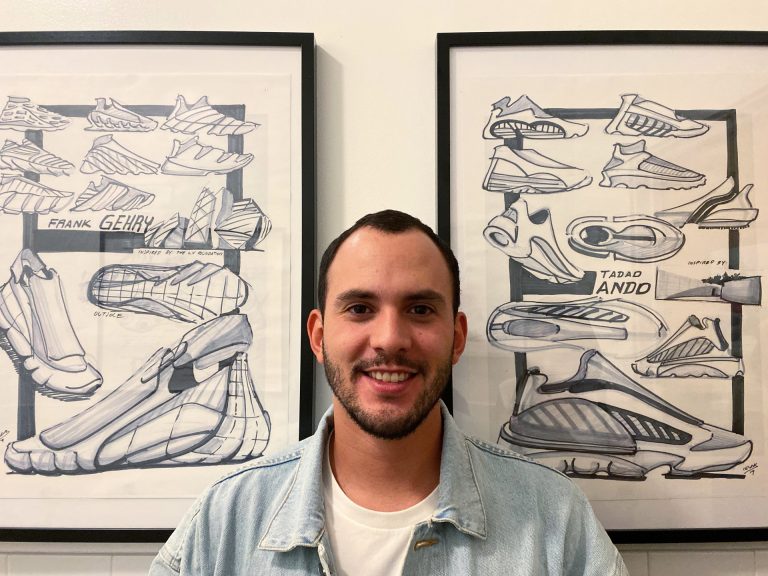 In Conversation With Cesar Idrobo, Head Sample Maker at YEEZY

In January 2015, a Colombian grad student who was less than a year into his masters took to Instagram to share a photo that included a detailed sketch he’d produced of a pair of the Nike Air Yeezy 2 Red Octobers; he captioned the post, “I might not ever get my hands on a couple of Yeezy’s, but I sure can draw them. I will always beat my reality and have anything I want through my art”.

Little did that master’s student realise that not only did these ambitions become a reality, but he would also go on to become the head sample maker and leading innovation creative for one of the most influential sneaker brands of all time. Since its launch in 2015, Kanye West’s semi-eponymous sneaker brand continues to dominate every release calender and is reportedly worth over $6.6 billion. As self-help author and philosopher Bob Proctor once said, “Thoughts become things. If you see it in your mind, you will hold it in your hand”.

And Cesar Idrobo holds it. Literally. He now spends his days working on innovation and conceptual pieces that are used as inspiration and creative direction for products that might go to market (You have him to thank for the oversized sliders West showcased on his Twitter a couple of years ago). Idrobo also creates and develops fully worked prototypes of new footwear designs for YEEZY under the guidance of rapper Kanye West and sneaker design godfather Steven Smith. When I asked Cesar whether this was something he had manifested, he responds diffidently, “No, no, seriously! All of this was never my goal. It never crossed my mind”.

As Cesar Idrobo celebrates his third year at YEEZY and the renowned brand continues to grow, we thought we’d sit down with one of the people behind it all. Keep reading as the creative discusses ignoring trends, fashion in Columbia, and the YEEZY teams’ reaction to those Roman sandals.

Let’s strip it all back and head to the start. What is your earliest memory within fashion?

School uniforms. All the schools I attended required one, so I was most of the time in school attire during the week. Weekends were the only time I had the chance to wear whatever I wanted, but it was mainly shorts and a shirt. Nothing out of the ordinary. It’s interesting how you break down fashion today, and if you step back, you can see a type of “uniform” across the board, just in different ways. I’m sure we can agree a “hoodie” is one of those pieces that most people wear on a day to day basis.

Was there a particular breakthrough moment in which you realised that design was what you wanted to pursue?

I knew I wanted to be involved in a creative field because I was always drawing and painting as a kid. However, a moment that made me realise I wanted to pursue design as a career was during high school at a college fair when I saw a degree called “industrial design.” I immediately thought this was the perfect major that combined artistic and mechanical skillset, which I had. It was exciting to know that there was something out there that I loved that I could do for a living.

Before working in shoe design, you had done a lot of industrial design work. Your YouTube channel even includes videos of yourself testing out cars. Have you found there to be any crossover connections between the design of specific vehicles and your shoes?

I think that the only similar aspect is looking at the shapes. At the beginning of the conceptual process with cars, you study shapes, so it’s the same with footwear in the initial procedure. The body is more critical than function, so we first want to nail the form and make sure that it is one that we are happy with, then we make it work. The conceptual processes that we utilise between cars and shoes are similar. There is an art within the functionality, but engineering takes away the creative part, but it is different.

Moving on to your career at YEEZY. How do you add such innovative and creative flair to your work despite working for a brand with a predominately minimalist philosophy?

My interpretation of ideas and how I do things are my “creative flair”. My analogy with approaching ideas is to think of when you’re translating a language and when you’re translating something, you try not to belittle the original meaning. You try to make it exactly like how they would say it in their language. In the beginning, it’s all about trial and error, so it all goes down to your attitude, not knowledge. You have to be willing to test new ideas and try new things.

Recently a photo has been circulating the internet of ancient roman sandals, which strike an uncanny resemblance to a few of the YEEZY models. What do you think this says about history repeating itself and specific fashion trends coming back?

We laughed. It’s funny! Humans have been on earth for thousands of years, and it is safe to say a lot has been done and explored within fashion. Therefore, why reinvent the wheel? It all comes down to making things better and curating them in such a way that is a compelling and transformative experience. That’s the real challenge.

As someone that works in pattern making, how do you interact with trends and forecast them to ensure longevity? Is it a trial and error sort of thing?

I pay attention to trends, but I don’t let them drive the concept’s vision. Vision over trend. Every time.

Despite only completing your master’s degree in accessory design in 2016, you have worked alongside major brands and big names alike, including Nike and Adidas. Do you still have a dream collaboration in mind as your career progresses even further?

Yes, I’m always contemplating what it might be like working for up and coming clothing brands that don’t have footwear as part of their lines. I see it as a white canvas to create new energy in a market full of recycled 90’s style shoes.

I want to keep having as much creative freedom as I have now and keep doing more of what I’m already doing. I’m open to the idea of a brand of my own, but not right now. Maybe in the near future.

This was our most requested question for you – how do you stay inspired and avoid burnout after continuously working in an industry that demands constant new ideas? Additionally, doing this whilst in a gruelling and repetitive pandemic.

Many ideas have to be put back into your “bank of ideas” as many ideas come out. A way to have a healthy account of ideas is by watching movies, reading sci-fi books, reading comics, going to museums and road trips. Inspiration can be found everywhere.

What would be your advice to any aspiring designer hoping to “make it”?

“There are no shortcuts to greatness”. Learn and master every step in the design process properly. For example: Be great at sketching, be great at 3d modelling, be great at prototyping. Your work will reveal how good you are and will make you stand out from the crowd. This book called Creative Confidence by Tom Kelley stuck with me because they talk about how art isn’t just about presenting your ideas, which most people mistaken creativity with. It’s about visualising your thoughts and expressing them. It doesn’t have to be perfect, but as long as it exists.

Interview by Ashley Morris
All images courtesy of Cesar Idrobo