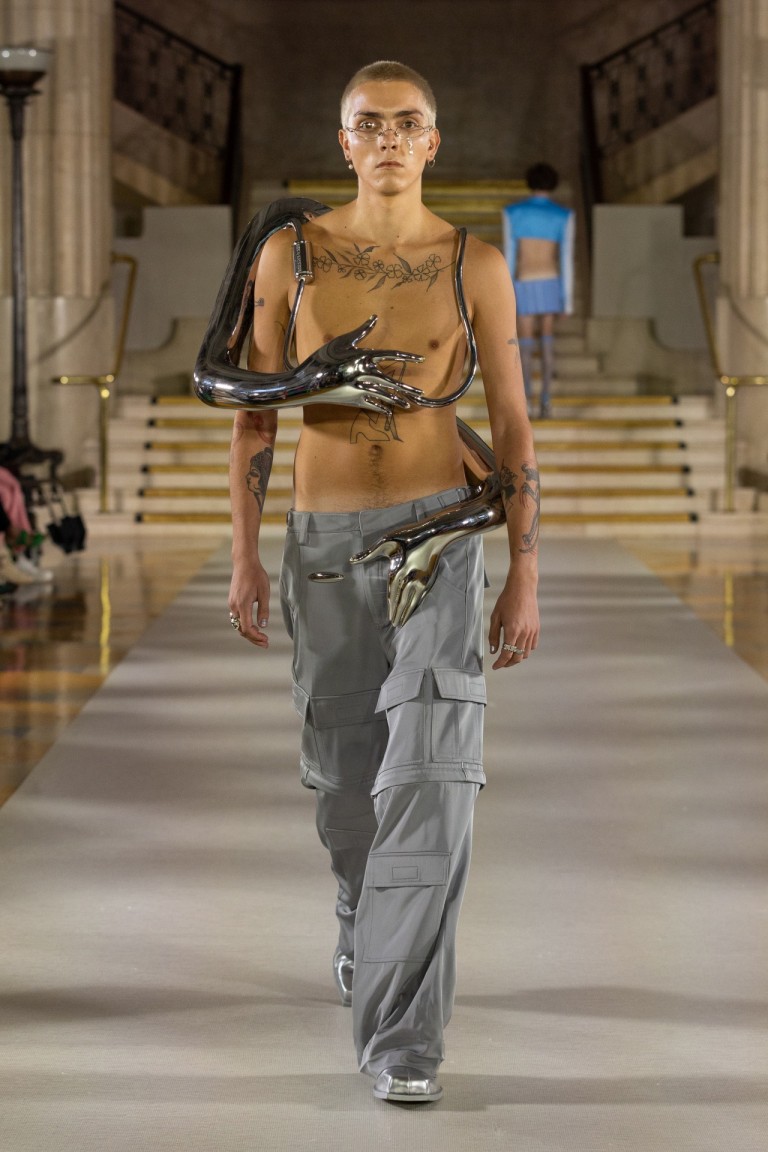 The Legend of Deification | KWK by KAY KWOK

There’s a lot of competition each season at the various global fashion weeks to stand out among the established and next generation of designers. For the emerging order, it’s a brave new world to navigate. Yet, some effortlessly accomplish industry awareness from the first graduate collections, generating the kind of attention that reverberates globally as the last model leaves the catwalk.

KAY KWOK is one such designer. Hailing from China, his unique, unapologetic blend of futuristic contemporary wear exploded onto the catwalk at London Fashion Week 2013 to critical acclaim. Based in Hong Kong, he quickly progressed from studies at HK Polytechnique to tutelage at the house of McQueen as accolades came from organisations like Mittelmoda. This international fashion competition saw KAY KWOK, the first Chinese designer to win in 20 years.

This breed of talent doesn’t go unnoticed for long. On first inspection of the metallic bodices from the latest collection, twisting about the body like gilded serpents, it’s easy to understand why McQueen took the designer under its auspicious wing. Since then, he has worked with a roster of global brands and dressed prominent music artists, such as Muse, Korea’s SHINEE and artists A-Mei, Joey Yung and Landy Wan.

Describing his designs as ‘boldly avant-garde and futuristic’, KAY KWOK returned to London last season after an eight-year hiatus under the rebranded KWK by KAY KWOK with a rebrand ethos as innovative as its aesthetic. This collection is not only about clothes; KWK considers a new generation of consumers and the complex layers of brand communication as it examines and embraces digitisation and technology. Gamification and online interactivity are central to building community, conveying positive messages, and exploring fashion and KWKs place in the metaverse.

The SS23 collection entitled ‘The Legend of Deification’ is set in the distant future in the year 2100 and ‘reinterprets the timeless themes of seduction, power and glory in the Chinese anthology’. It further considers and accentuates ideas of the digital environment by adopting 3D printing techniques and oversize silhouettes that nod to freedom with gender and self-expression while further emphasising the electronic theme through a candy-toned palette.

The result is a phenomenal demonstration of skillful craftsmanship. From voluminous metallic dresses to oversized shirts, accentuated shoulders, thigh-skimming minis and signature metallic bodices. At London Fashion Week the collection weaved its way from its digital representation to real life and back again as it appeared on the live catwalk, then spread quickly across social channels. The otherworldly and sculptural elements are stunning accompaniments to the fabric pieces, all seeking to confront stereotypes through a singularly experimental aesthetic.

The energy generated through the show, the progressive, playful looks and the unique format of the brand highlight the designer’s immeasurable drive. SS23 began as a series of ideas contrived as the previous collection was still on the runway. And this energy is channelled not only into stunning creations but also into areas that are part of KAY KWOK’s ideology. With a firm belief in the power of philanthropy and broadening perspectives, KWK by KAY KWOK also aims to inspire empathy, inciting his audience to consider all-inclusive love. KWK by KAYKWOK is not just a brand; it’s a philosophy; through its digital platform and clever silhouettes, it challenges traditional concepts of beauty. It gives a platform for those who feel unheard, creating a safe space for people to celebrate their oneness and uniqueness. At a time when young people are all too aware of brands’ spurious attempts to capture their attention and play on their desire to live more authentically, KWK has come back to London at just the right moment.