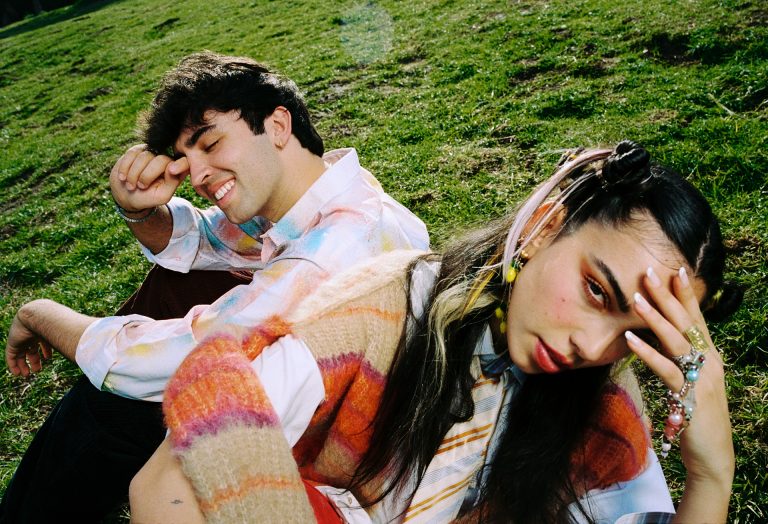 A Creative Bender With BETWEEN FRIENDS

Savannah and Brandon Hudson are siblings. Brother and sister. Savannah and Brandon make music. They keep it in the family, but it stays BETWEEN FRIENDS. This LA brother/sister duo just dropped their mixtape ‘tape 002’, the second in a series of three.

BETWEEN FRIENDS’ essence lies in adolescence’s youthful heartfelt expression and a visual time travel to the 90s with CDs and walkmans. Their left-brain bedroom pop and embraced DIY creativity allows them to romanticize things like relationships driven by loneliness – “I’m looking for affection in all the wrong places, and we’ll keep falling on each other to fill the empty spaces’ om ‘affection’ from their 2018 debut project ‘we just need some time together.’

One of the underlying factors of their success is their talent for visual songwriting. The lead single out of their mixtape ‘tape 001’ – ‘shiny’ – will take you on a motorbike ride, and you can still be in your bedroom. That’s where BETWEEN FRIENDS want you to be. Their motto is to make music in their bedroom and for you to listen to it right there.

In anticipation of the full BETWEEN FRIENDS project emerging this summer, the duo shares the ins and outs of their sibling dynamic and more. “We’re doing well, happy to have new sounds on the internet”, they express their joy, but we’re the ones excited as BETWEEN FRIENDS’ discography is becoming the soundtrack for the first sunny days in London for more people than you think.

As the world is still dealing with what we don’t dare to mention anymore,  everyone has different circumstances. What have Savannah and Brandon been up to? We wondered. “Our days all year have looked very similar but also very different from usual life. When we aren’t working or making things, we’re most likely streaming raves on youtube to feel that sense of human connection again”, they reveal. Don’t lie; you’re already searching for a rave video on Youtube.

Born and raised in Los Angeles, the duo has always been deep in with other creative communities, and as the descriptions of genres are becoming outdated, BETWEEN FRIENDS shares their own stance on things: “hmm, that’s tough to say”, they ponder. “I feel like when we started creating as BETWEEN FRIENDS, we didn’t want to box ourselves into any sort of genre or mold. We very much so freeform create whatever we are feeling or whatever we are into at the moment. We have an early BF folder on our computer called ‘laptop pop,’ we thought that was kind of a fun concept”.

There is no other relationship like the relationship between a brother and a sister. BF describes theirs as a ying-yang connection: “When we were kids, we each had our own thing musically, whether it was one of us writing in our bedrooms or one of us creating live shows on paper. We both really wanted to let that feeling out, and we decided that we could learn a lot from each other, so we started collaborating and have been doing that ever since. It’s like a ying-yang kinda thing. We each bring something different to BF every day, whether it’s perspective or the work itself. We always try to see things from each other’s perspective”.

As well as the duo’s stage name, Savannah and Brendon forming a collaborative duo was a lucky coincidence, and in the spirit of just going for it. They explain: “we never really planned on it, it just happened, and we started liking what we were making, and now we can’t stop”. The story behind the moniker was only something said over a phone call: “One of us said, “can we keep this between friends?” and right then we were like, that’s the name. It just felt right and felt casual”.

How do these cinematic tracks come about, and the simple answer is, it depends, as BF elaborate: “It varies based on the day and the experience. Some days it’ll be us listening to instrumentals we’ve made and written over them. Some days we’ll produce the music around a song. Sometimes we’ll write while we are driving around”.

Like true artists, when asked about the first mixtape of their three project series, it is up to us to match the song’s meaning with our own experiences. “We had so much fun making tape 001. It was kind of like we blacked out in quarantine and went on a creative bender at our home studio. It’s all open to interpretation; we are just telling stories and creating scenarios”.

Expecting nothing less, but all of the BETWEEN FRIENDS artwork seems like it’s hiding a good story to tell. They unveil how the making of process looks like: “For the most part, our cover art is made hanging out with friends and making stuff. We’ll come up with an idea and shoot it. Sometimes they’ll be iPhone photos we take”.