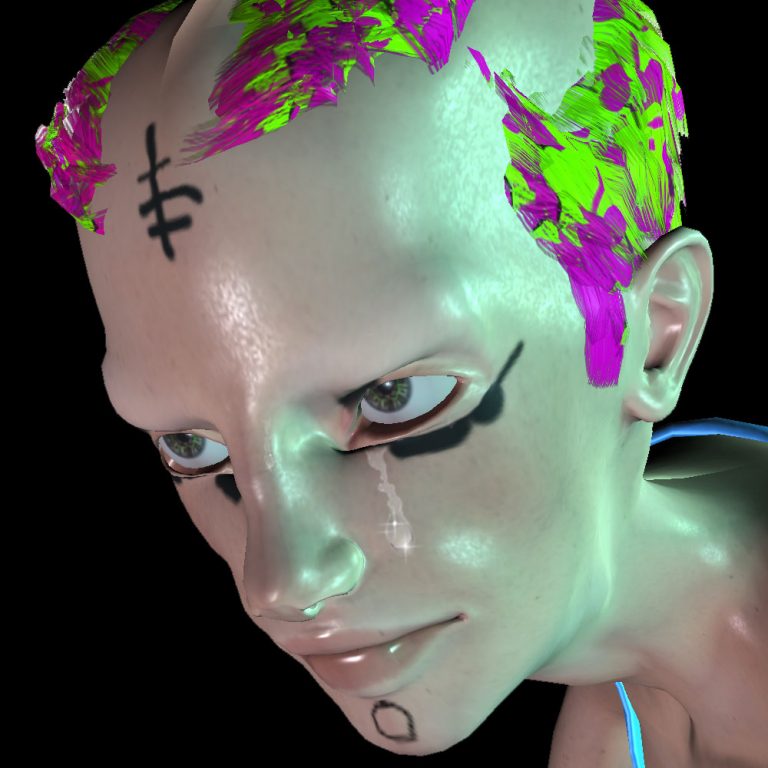 With the release of their ‘Cybernetics’ EP in June of last year, Avant-garde, alternative producer, and vocalist, Spent, has been uploading their existence into the virtual realm ever since. It was a release that was moody and pensive, tackling issues that Spent holds close such as non-binary beauty standards, painful friendships and escaping from reality. Now the artist is sharing the story of ‘Cybernetics’ through visuals, creating music videos for each release. With two recent visual stories for singles ‘If I Could Cry’ and ‘Delete It From My Vocab’, the artist showcases their vast range of talents. Varying from a futuristic, cosmic avatar living it’s best life, to filming during lockdown and showcasing a beautiful story of close friendships, whilst tackling the tough realities of mental health.

Spent is part of a younger generation and a new breed of musicians who are no longer tied down to the limitations of genres. What replaces that old school concept is a totally free creative reign that draws on the possibilities of modern-day technology that creates a forward-thinking outcome. As Spent describes, “My sound exists in the disconnect created whilst living both digital and physical lives. With so much of our life existing online and through screens I began to question which version was my most authentic self. I want to pair pitch-shifting, highly processed sound with acoustic, ambient recordings and incredibly human lyrics in order to sculpt this state of tension.”

Spent is a queer, non-binary artist who tackles the all-important theme of identity throughout their work. As a result of the artist’s close relationship to this topic, the final product is deeply tinged in emotion. “In its purest, distilled form, my work explores identity – the construction and development of generally my identity. At the time of writing ‘If I Could Cry’, my mental health was at the forefront of my mind and I wrote and produced work to process it all.” Spent describes, “I don’t know if I can say I’ve utilised my demons, but have definitely found that leaning into the darker corners of my head and psyche has helped me understand and ultimately grow as a person.”

‘If I Could Cry’ shows the artists vulnerable side, despite its quirky, left field production style. Written about Spent’s challenges with mental health and their torn emotions over the effects of anti-depressants, it’s a topic that many can relate to. “I wrote If I Could Cry a few months after taking anti-depressant medication for the first time when I was 18, noticing how they significantly numbed my emotions. It was confusing because on one hand I loved it, I didn’t feel so low anymore, but on the other I didn’t really feel anything at all.” They explain, “It was this state of limbo that I couldn’t work out if I wanted to stay in. Cut to a few years later, I revisited the track in a better mental state and re-produced it in a much more danceable and fun way, kind of forgetting about the lyrical meaning.”

The artist’s visual release to accompany ‘If I Could Cry’ is a wholesome and beautiful story, showcasing friendships and in many ways displays Spent’s way of dealing with their mental health – escaping with people they truly love. “I wanted the video to push this contrast even further. Every person involved is a really close friend of mine and Fraser (the co-director) and I wanted to film them in their space having fun and generally celebrating our friendship.” The artist states, “Together with a constant stream of subtitles linger on the screen reflecting how, even at the height of my depression, I would always go out, party, and attempt to dance off that weight that tainted every moment. It’s quite a funny concept really – I feel like I’m going to cherish this video for years as a wholesome encapsulation of my life and friends, but really it’s just me crying about being depressed!” With the video shot over 4 months, utilising every gap in lockdown, Spent face more than just a few challenges in completing the music video, but above all, such commitment shows just how important it was to complete that story.

The visual representation for ‘If I Could Cry’ marks the second music video release from Spent’s ‘Cybernetics’ EP. With the artist set to release another three and complete the whole story of the EP over the coming months, the theme of storytelling and leaving nothing to the imagination is something that Spent feels is vital to their artistry. “Video and visuals have become incredibly important to me over the past few years. I’ve created such a world in my head in which ‘Cybernetics’ exists, it felt so natural to extend the project outwards in order to best realise the concept. I wanted each video to be a moment for every collaborator to fully indulge in their craft and further develop the Cybersphere in which Spent exists.”

Recently the artist released the visual story for the EP’s third single, ‘Delete It From My Vocab’, a release that shows Spent’s Avant-garde and futuristic side. The artist is represented by a digital avatar, something that’s certainly unique in itself, but in the music video this avatar is bought to life in a cosmic world. It’s a far leap from Spent’s previous visual release, but it does suitably match the songs unpredictable energy, and displays the varying styles the artist owns. On the release, Spent comments: “Sam Sands was the first person I ever collaborated with in regards to the Cybernetics project. He proved to me that the world of Cybernetics could be translated so accurately outside of my head. He designed all the EP artworks and I really wanted to give him a space in this video series to fully flex his skills. His favourite song from the EP was ‘Delete It From My Vocab’ so I gave him the song and honestly just let him do his thing. After a few months he sent me the stunning final video, that as usual, outdid all my expectations!”

Spent’s artistry comes from a place of love. Tackling topics that many shy away from shows just how important they feel about these issues. Themes of identity and mental health have never been more important than today, and the only way more people become aware is through conversation. With all three music videos from ‘Cybernetics’ completing compelling storylines, we can’t wait to see what Spent reveals in the coming months.