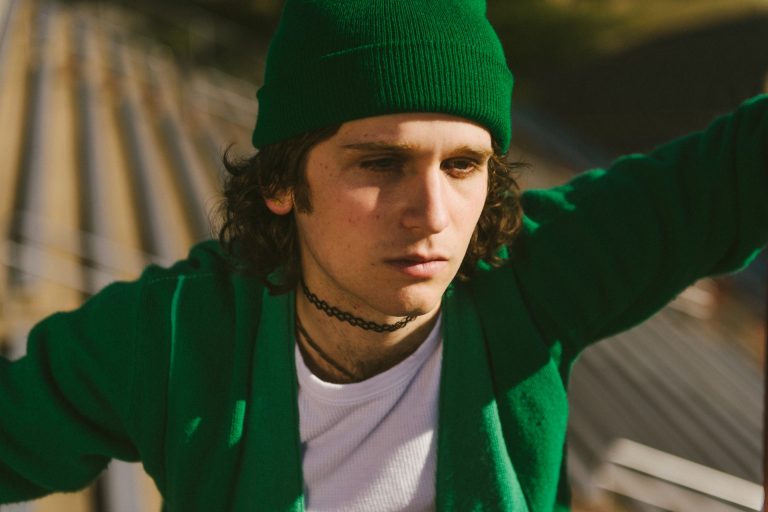 A Snowed In Chat With Briston Maroney

Right from the start, the ‘Freakin’ Out On The Interstate’ singer Briston Maroney expresses his current mood. Before I even got to dive in or ask any questions, the artist demonstrates his fun, easy-going personality. “Today, I am very pleasantly cold and snowed in here in Nashville, getting pretty pumped up for my morning cereal”, he shares. Meanwhile, I can already feel this is going to be an exciting interview.

The 23-year-old recording artist can’t compose himself as he counts the day to release his debut album ‘Sunflower’: “Honestly, a lot of me convincing myself that I’m not impatient for it to finally effing come out. We have prepared in advance for everything to be released, so I’m sure there will be some great days of also doubting everything I’ve ever done because I have nothing better to do hahahaha, as all humans do when left with idle hands. I’m trying really hard to get in a clear-minded space for when the record is released, though. I want to be really present in order to be truly grateful as possible for the fact that I’m even getting to have the experience of releasing a record”, says Maroney.

The album will embody the culmination of the last decade of Briston Maroney. Previously, Maroney revealed the process of making this record also involved a whole another journey of coming to terms with who he is. I ask, what is the conclusion; who is Briston Maroney. Stunned by the question, he sips on his coffee, has a good stretch, and answers:

“Right now, I feel like I really know who I am, but the catch with that is: the person I’ve discovered I am is not really who I thought I was going to be. So scary but also so liberating. The biggest lesson I learned on a human level in this past year or so/record process is that the core of something’s being is so often its best feature. So often, we complicate everything by covering that up or assuming that we have to distance ourselves from that to grow. I have always felt a really strong connection to spirituality, love, and just people. Growing just makes us look at that in ways that maybe are doing more harm than good, so often clouding the unclouded intellect/purity that we are born with. I’m trying to be a kid again, honestly, but also learn from mistakes I’ve made in the past. I came to terms with this by trying hard to be things I’m not, which, if you ask me, is the best way to figure out who the hell you are!! Process of elimination”, he explains.

The compulsory dose of endless free time introduced by the pandemic meant our minds wondered and asked too many questions we didn’t have answers for just yet. For Maroney, it was the dilemma of, who am I without music and performing. It was a challenging transition, as Maroney just returned from a tour and sold out a hometown show.

He elaborates: “When COVID struck, we had just come off of a 2-month long world tour, ending with a sold-out hometown show in Nashville. When you sell that venue out, they give all the band members little patches to toss on jean jackets or whatever. I went back to parents’ place to hang for a while as I didn’t have a house and placed that little patch on my windowsill by my bed. Waking up and seeing that was so exciting for a few days. The feeling of accomplishment was amazing! An honor”, he expresses his gratitude.”

From such a high, Maroney shares his following thought process: “But once word started going around that touring was going to be shelved indefinitely, that patch immediately became a warning sign. If I couldn’t be this person playing shows and ‘accomplishing so much’, who the hell was I? I immediately realized how much work I needed to be doing to figure out who I was when I wasn’t a music boy!! I started taking really shaky footsteps to finding other interests and seeing what I loved and figured out quickly I had been putting that off for way too long”.

On his soul-searching mission, Maroney stumbled upon few activities that kept his sanity in check. He reveals: “I certainly lost my mind more times than I’m proud of in this process, but I definitely figured out some things I can do to feel a little more level. Winter has thrown it off big time, but I got super into distance running last for all of summer and fall. Tossing on like 4 albums I’d been meaning to listen to and just jogging my little self around the greenways and parks in Nashville always made me grateful to be alive. I’ve been reading more than usual as well. I just finished ‘Comedy, Sex, God’ by Pete Holmes, which I really enjoyed”.

The first time I’ve heard of Briston Maroney was during the first lockdown while looking for new artists. Knowing his track ‘Freakin’ Out On The Interstate’ blew up on TikTok, I wasn’t the only new fan tuning in. We discuss the unbelievable magic of the app’s ability to bring a song back and give it a new entire life. Maroney jumps in: “My best friend is a TikTok fanatic, and I had never dabbled, and when he told me the song was coming back big time on the app, I quite literally said, “you have to be shitting me”. hahahaha. It was so insane to see this thing that I thought had seen the most people it ever would have a completely new life. That song was about being 19 and thinking that love had to be a shit show, that everything had to be falling apart all of the time for it to be real. But it’s also about the glimpses of genuine love and friendship I saw in those times and the hope that it wouldn’t always be shitty. I found it to be a lot easier to love when you aren’t messing everything up for the sake of it”.

Previous EPs’ Carnival’ and ‘Indiana’ made for successful records; however, looking back, Maroney reflects on the making of process and blames his raging youthful angst. “Carnival and Indiana both mean a lot to me, and always will! They were my first attempt at letting everyone know how I felt about everything in my life! Huge!! My buddy taught me the phrase “measure twice, cut once” the other day, and it applied pretty heavy. Both of those EP’s were certainly only measured once, if at all, and cut really quickly with the help of a lot of youthful angst”.

He continues by comparing old material with his upcoming debut album: “‘Sunflower’ was vastly different in that way. John Congleton, the producer, always held me accountable for making sure I was confident with what I was trying to say and being said in the right way. He didn’t let me undercook things for the sake of getting them out, and I’m really grateful for that. There’s no part of the record I haven’t thought really hard about, which is terrifying but something I hope will make at least be able to grow from whatever happens with it”.

With ‘Sunflower,’ Maroney was blessed and cursed with extra time, depends on from which angle you look at it. Compared to other projects, Maroney is honest about taking this one more seriously; thus, he learned more from the process, such as: “Patience with a gigantic capital ‘P’. This was absolutely the longest I’d ever spent working on a project, and so often in the times between sessions and whatnot, I would completely second guess everything that was happening, and by the end of it, I found the benefit in just sitting back and accepting: WHATEVER IS GOING TO HAPPEN IS GOING TO HAPPEN, AND FREAKING THE HELL OUT ABOUT IT WILL NOT HELP ANYTHING. What a trip that one is hahaha. I walked away from this record realizing I literally can only do my best, and it’s worth it to do that any time you get the chance to”.

When I was interested in the reason behind the album title, I did not expect to receive such an in-depth, touching description of what sunflowers mean to Maroney. Here it goes: “Sunflowers rock! I was looking really hard for a symbol of those feelings I mentioned earlier regarding feeling youthful and making sure to appreciate the parts of your soul that are just inherently beautiful. Sunflowers fit that mood perfectly in my mind; they can be infinitely appreciated by anyone of any age or any background. They are just unquestionably beautiful. I really love how they will do anything to get to sunlight, also. I was fascinated by the lengths they will take, bend around things and fight for the sun, for their life!!! That’s pretty damn sweet”, he describes.

Speaking on his most recent single, ‘It’s Still Cool If You Don’t’, Maroney unveils the backstory: “That track is just so straight up about being a young, awkward kid and figuring out how the hell to deal with the fact that you are in love with someone. Just because you work up courage at that age to tell someone how you feel definitely doesn’t mean it’s gonna come out the right way. Congleton and I were laughing a lot writing that one thinking about how true to life the stumbling lyrics in the chorus are. When you are a kid and in love, you’ll say a hundred things before you can just outright tell someone how you feel; we really loved that idea”.

A cherry on top, Maroney did not make only one announcement. While revealing the release date of April 9th of ‘Sunflower,’ he also stated the record will be accompanied by a full-length feature film. “Joey Brodnax, director, and creative mind behind nearly all of sunflowers visual side came to me with the idea of doing 10 music videos total, one for each track. Immediately we both knew that was going to lead to all of them somehow connecting; we always geek out about shit like that. Very quickly, it became such a fresh idea of how to express the story of this record and an infinite playground for what we could do together. I’m just starting to get into some acting and was so damn excited to try this, and anything that excites you creatively that much is something you have to pursue. It’s about an hour-long, includes all of the music videos, as well as a ton of other footage we compiled through the entire filming process. It’s funky, that’s for sure”.