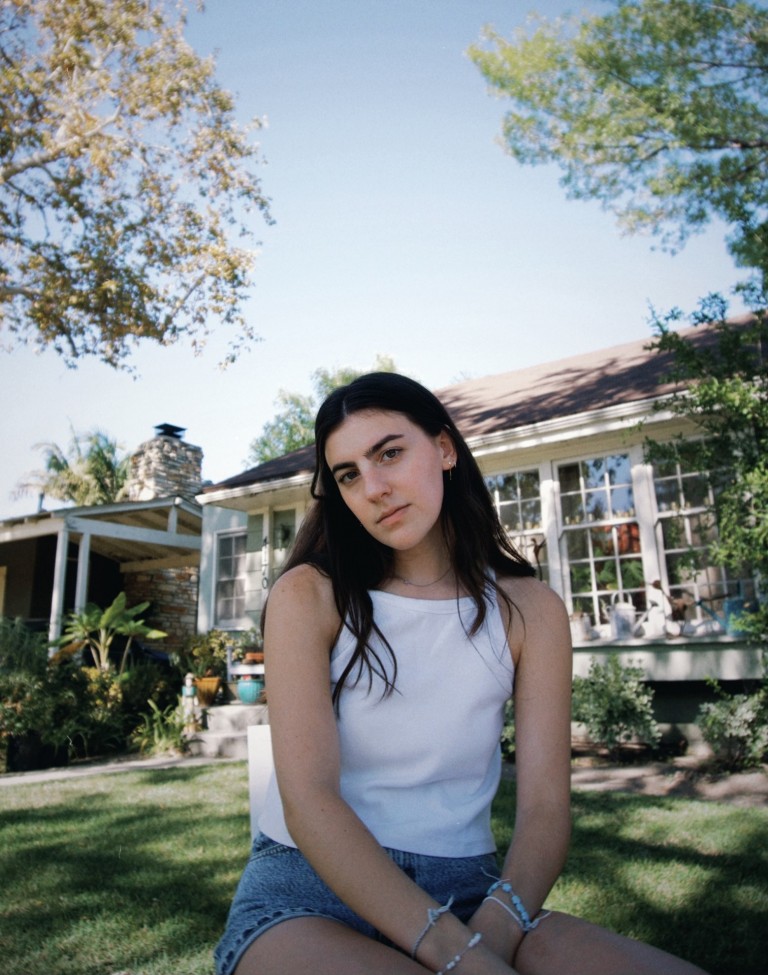 Last month singer-songwriter, Avery Lynch, caught our attention when she released the buoyant pop single ‘Sleepover’. It was a deeply personal track that told a rather beautifully nostalgic love story which served as an ode to those carefree teenage years. It also offered a glimpse into Lynch’s next project, ‘The Kids Table’ – the artists debut seven track EP which is released today. It sees the vocalist build upon a reputation for her lyrical prowess in which she effortlessly brings to life moments from her past making for a truly engaging experience as a listener.

Over the course of the last two years in which Lynch has been releasing music independently, the artist has racked up millions of streams and a loyal fanbase to match. In fact, Lynch rose to prominence via TikTok amid the pandemic and rather quickly saw those views turn into streams on her own songs. From the offset the artist made music from the heart, often drawing on her most vulnerable moments, but moments in which people could relate to. It’s an approach that she’s since ran with and ‘The Kids Table’ traverses a roller coaster of emotions – from heartbreak to the artists struggles with mental health and negative self-image, through to her challenges adjusting to the shockwave of adulthood. The result is a compelling listen and one that pulls you into the artists world for a touching journey.

We spoke to Lynch ahead of the release of her debut EP – which she describes as her most ‘meaningful project to date’ – to learn all about the inspiration that’s fuelled its immersive storylines, how the singles leading up to the release set the tone and her unique journey to date.

Hey Avery! Congratulations on the release of ‘The Kids Table’. How did your journey into music start? What was it exactly that you loved about the artform?

I started out playing piano when I was 6 on a toy piano and I was able to figure out how to play songs by listening to them, so my parents signed me up for lessons. I started singing around the same time but didn’t do the two together until I was probably 8. That’s when I started writing music too. I don’t really know what I loved about it exactly, it’s just all I did and all I wanted to do.

You’re from Pennsylvania, what was the music scene like in the state? Was there a specific sound you felt drawn to?

There was no music scene around me really. I just started playing piano and singing and that was kinda my sound from the start. I always gravitated towards ballads for some reason, and I still do.

You kick started your solo career during the pandemic, rising to prominence through TikTok, where you gained 328k followers and 6.5m likes in just one year. Did you ever expect things to take off quite so fast?

I didn’t really expect that, no. It was really gradual though and was over the span of 2 years, so I never had an “in shock” kind of moment about it. It’s so cool though how two years ago my life looked nothing like this!

That success swiftly transitioned to Spotify, where your debut EP ‘To Love Someone Else’ racked up over 15 million streams. Was there a surreal feeling that came with how people reacted to that release?

Yea that was insane for me. I was extremely confused because none of my videos about the EP did well and somehow the song To Love Someone Else reached a million in a month and it didn’t make any sense. It was so cool.

Recently you released your latest single ‘Sleepover’, what was the inspiration behind the track?

I wrote Sleepover about what it was like living in Boston with my boyfriend and our friends. In the beginning of our relationship, Walgreens runs and sleepovers were all we did. Later when we were living together in a house with our friends, we would all go on Walgreens runs to get snacks and come back and watch movies together. I wrote Sleepover to try and capture how much fun that all was.

It’s yet another intimate and personal story, deeply soaked in nostalgia, how do you find the experience of writing in such a manner? Do you find yourself learning more about yourself in the process?

I really enjoy writing that way cause I get to keep how I felt in those certain situations/events kept alive in the songs I write about them.

‘Sleepover’ shares similar connotations to your experiences with love that both singles ‘I’m sorry if i hurt u sometimes’ and ‘Love Of My Life’ projected earlier this year. Each track will be on your upcoming EP ‘The Kids Table’, what else can fans expect when the project lands later this month?

I think people can expect to have more insight into my life from this project. I get to go into more than just love and breakups, and those songs are very impactful to me so I hope they can reach the people who might need them.

Is there a specific message you hope to project to your listeners when the EP drops?

I want to promote mental health awareness with this project and also just allow people to understand more about me and that we’re all probably experiencing similar things that we might not like to talk about. The project really captures what’s been going on in my life for the past 3 or so years in every way possible.

You’re now two years into your solo career and you’ve achieved a lot in that time, but how have you found navigating an industry quite as complex as the music world during that time?

I have no way of navigating it, I just keep making songs and sharing them and seeing where that takes me.