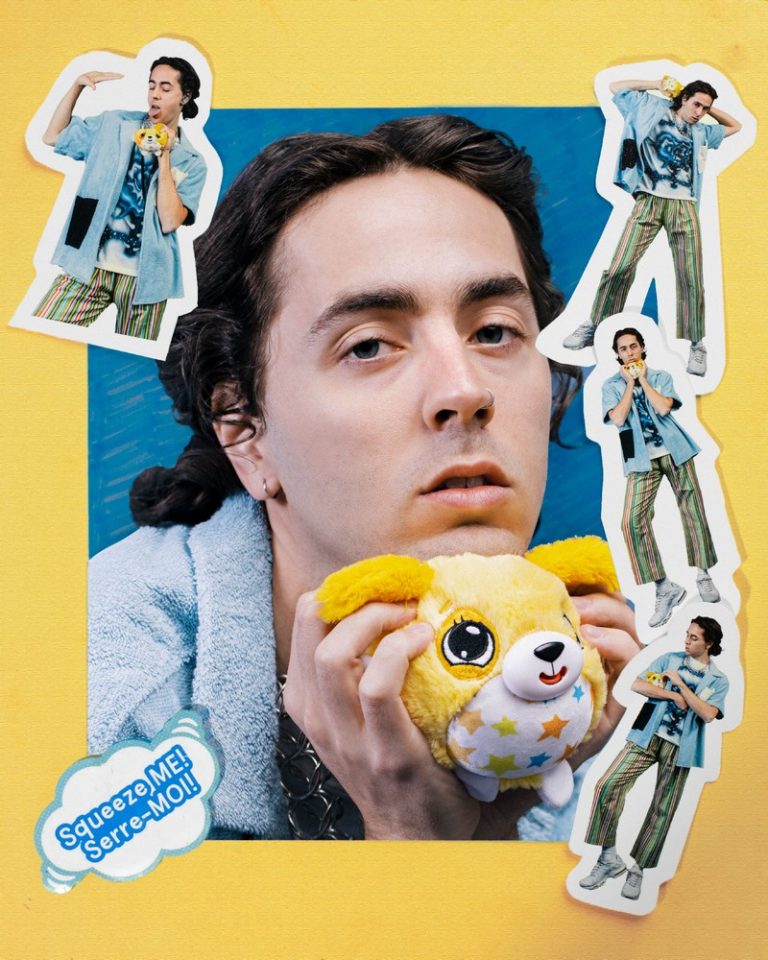 Whether holding a hairbrush fantasizing about playing radio city music hall or monologuing in the mirror pretending to be Meryl Streep mocking Anne Hathaway’s “lumpy blue sweater”; we all have our fantasies that free our soul and unleash our inner star power.

This fantasy is at the core of Casey MQ’s recent work. Casey is a producer, DJ, event creator and film scorer that has taken the world of electronic music into a new stratosphere. He is also the co-creator of Club Quarantine, a queer virtual club that launched at the start of the pandemic that has hosted artists from Charli XCX to Pablo Vittar.

His debut album ‘babycasey’ is, in his own words, “his childhood boyband fantasy come to life”. With his new remix album ‘babycasey: ultra’, Casey MQ takes this childhood yearning of becoming the pop superstars of yesteryear into another dimension; a realm where this fantasy becomes reality. The first single from the album ‘What About Us (oklou cover)’ is out now on all streaming platforms and ‘babycasey: ultra’ drops on October 29th.

After a sneak peak at this exciting new album, I sat down with Casey to discuss the creation of babycasey ultra, the incorporation of the virtual world into the now touring Club Quarantine, and, most importantly, who is his favourite member of S Club 7.

What was the idea behind creating a remix album of babycasey?

In line with this, it’s almost as if babycasey was flipped and totally reset. It gave it a new life and a new dimension to the music. When I DJ in the club and play both online and in person I try to add chaos in my sets. I jump around and try to bring the audience’s attention forward. And so I wanted babycasey ultra to be an album that would speak to this chaos and giving you the joy to keep jumping and vibing.

How did you go about choosing artists who you wanted on the album?

A mix of things. I really wanted to include dear friends like oklou and people from my Toronto music community like a l l i e and Myst Milano. Also when I play a lot of my own stuff, I mix in certain artists like DJ Fingerblast and Lobsta B. So I reached out to them and subsequently became good friends.

These are all people that I admire and that I thought could do wildly different interpretations of these songs, bringing their own landscape into the babycasey world.

The album is very different to babycasey, with transitional songs turning into full length features as well as a change in the song order. Once you had the songs, how did you curate and structure the album?

When I started asking people for remixes, I wanted them to pick the songs that they were drawn to. After some time when everything was collected, I would look at what was missing in terms of flow, energy and sequencing and start to add my own versions of the songs. For example, ‘The Ultra Intro’ came from wanting to find a way to bring people into the world. This was just one of the ways to make it one cohesive experience with people throwing various sounds into the universe of babycasey.

In the new remix album you have radio motifs that add humour and a sense of early noughties radio nostalgia. What was the inspiration for this?

I just think about classic top 40 radio motifs that are so funny to me. I loved the humour on babycasey, so I felt like this was a way to bring this to the forefront and take it further. Also, it is related to the stadium experience. I wanted to take it to the heights and what you would imagine as a big world tour with production values to match.

You refer to your album as your childhood boyband fantasy come to life. Could you delve into this a bit more and how has this translated to babycasey: ultra?

There were a lot of things that I had done in the original babycasey that spoke to a star in their quiet bedroom imagining themselves in their dream life. So whilst the first album is the action of reaching for the heights, this is the heights itself.

When I was talking about it I would say words like stratosphere and we built the world out from there whilst keeping it cute and humorous.

We need to talk about the amazing Club Quarantine. You’ve said before how one of the core ideas behind the event was to bring people together. Do you feel more connected to your fellow creators and musical community than before?

100%. There was a time over the course of 3 months I was booking people every single day, doing soundchecks and reaching out to artists who I respected and admired. So whilst it was quite intense, there were a lot of people I really connected with and from there built very important relationships. It’s such part of my life now and it’s amazing to see how that community deepened.

Going forward, are you trying to keep the URL aspect of Club Quarantine that made it special?

Definitely. Going forward, we are trying to combine IRL (in real life) and URL (the virtual online world) together. We did this recently at Bushwig in New York, and people were ecstatic. The energy was so high and so intense and so people were overwhelmingly excited. There are simultaneously two parties happening at once as well as one party altogether, teamed with people on their laptops so they are having their own personal party. It was pretty special.

Aside from your professional work, what brings you joy in life?

It’s crazy. In the last two years I started doing sports again. I NEVER did any sports. I just didn’t like it. It wasn’t fun, I felt like I didn’t fit and I wasn’t good enough. But only recently I’ve been wanting to do activities that don’t involve me sitting on my laptop so I found my way back to doing soccer. It’s now SO FUN. It’s great being around people and it’s fun to play a game and be part of a team. It isn’t taken too seriously and its brought me a lot of joy repositioning this in my life.

You are such a multidisciplinary artist and have so many skills. Have you done anything in lockdown to further supplement your art?

I started interacting with my dreams more intentionally. I started actually writing them down, thinking about them and applying them more to my creative process. I found it really inspiring for my music and they have impacted a lot of the new stuff I have been making.

Controversial question. I saw in your interview with CBC Music that when you were younger you awould put on concerts of S Club 7 and dance around. Who is your favourite S Club 7 member?

Oooh that’s a tough one! I went through phases of S Club 7. I think my initial love was Jon as I think I exactly wanted to be him. But I also had an affection for Hannah as she was amazing on the TV show. I haven’t watched the show in forever but my memory says that she was so funny on it!

Any plans to head to the UK in the future.

It’s definitely in the works. There are no specific dates but there are talks concerning my own stuff and Club Quarantine to start thinking about new tours. Hopefully by the end of the year.

Stream babycasey below and get ready for the release of babycasey: ultra, the remix album, dropping on 29th October