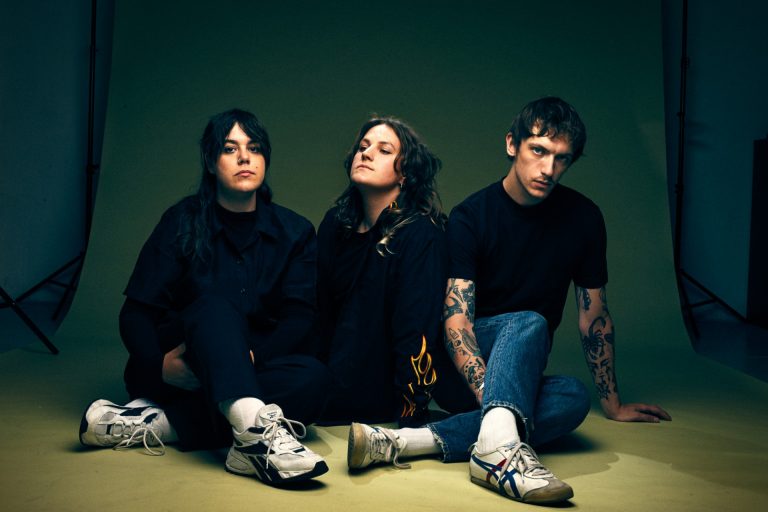 Swedish shoegaze band Spunsugar have refined a post-punk meets dream-pop aesthetic that comes to a stunning fruition on their latest EP ‘Things That I Confuse’. Consisting of the creative trio of Cordelia Moreau, Elin Ramstedt and Felix Sjöström, the group made a name for themselves with their critically acclaimed debut album ‘Drive-Through Chapel‘, released last year. It was a release that showcased their truly versatile nature, and their latest EP only pushes that further. Adding a layer of experimentation to their work, ‘Things That I Confuse’ sees the artists spread their creative wings and offer a more diverse array of glittering delights.

Rich and dreamy throughout, Spunsugar’s attention to the smallest details adds for an entertaining spectacle. Taking inspiration from giallo films and Japanese movie monsters, the group tell stories of close relationships, trauma and regret in a unique manner. Adding a further layer, the release is also accompanied by a music video for the previously shared single ‘Rodan’, premiering today. Showing the band play live on a tour that never was, recreating a moment lost over the last year where the pandemic ruined their opportunity to connect with newfound fans. We spoke to Spunsugar ahead of the release of ‘Things That I Confuse’ to learn all about the EP’s creative process.

Hey guys, congratulations on the release of ‘Things That I Confuse’! How did the three of you come together to form Spunsugar? What was the catalyst behind your post-punk sound?

Elin: Me and Cordelia have been playing music together since we were 16. A few years ago, we started to write music together again and decided that we wanted to do it more seriously. Cordelia and Felix met when they studied to become teachers at the university. Both dropped out but Felix started to play bass with us and after a while Spunsugar was formed.

Cordelia: Our sound is a mix of the styles of music we love. It has evolved naturally.

Last October you released your debut album ‘Drive-Through Chapel‘, to critical acclaim. How important did that moment feel in your development?

Cordelia: It was a moment, absolutely. We could kind of relax after that and just focus on trying new things in music.

Felix: Releasing an album has always been the dream, especially releasing something on vinyl. It made things very real.

You’ve just released your new EP ‘Things That I Confuse’, what was the inspiration behind the four tracks?

Cordelia: Working stuff out, letting go of things as well as loss.

Felix: They kind of wrote themselves after a period of no songwriting, at least between the three of us. We moved in to a new rehearsal which I think gave us a boost.

The EP sees you push your sound further with an array of diverse sounds. Was this experimental approach the product of a focussed effort?

Elin: We wrote the songs on the EP pretty quickly and were eager to try something new.  Soundwise, we wanted to peel off some layers of dirt, in contrast to our debut album. I don’t think that we will go further down the road of pop and softness, but it was really inspiring to try something different.

Felix: We wanted the path from finished song to released song to be a lot quicker than on the album. The sound of the EP kind of reflects that. Even if the EP could be called softer, it’s much more raw and lo-fi in the sense that we haven’t really worked a lot with layers and such. The songs sound a lot like they did in the rehearsal space when we were writing them and that was definitely a deliberate effort.

Songwriting wise, you reference the likes of giallo films and Japanese movie monsters to help tell deeply personal stories. It’s an alternative approach but one that’s key to your identity. How important are these subliminal messages to your songs?

Cordelia: They’re not really subliminal on purpose. It’s just a way for me to better understand and talk about things in life. Horror media takes everyday feelings and crystallizes them, the same way as children’s media does. It’s easier to look at things in that distilled way. And then you put your own feelings into it, and the themes and characters become symbolic in a way. Like ‘Rodan’ reminds me of myself when I’m angry. Simple and silly, but it’s the way my brain works things out.

Your single ‘Rodan’ is accompanied by a live music video that sees you recreate life on the road. What inspired you to tell this visual story?

Elin: The video itself is part of a bigger project of filming us playing live at different venues. We released our debut album last October but couldn’t really play any gigs, so it’s the result of some restlessness and us wanting to try something new.

Felix: It’s quite bizarre to look at and I think it will be cool to look back on in the future. We had to do something with all this momentum we felt and we did not feel that the format of a livestream for example would fit us. The video will in that sense be more interesting in the future maybe.

What can we expect from Spunsugar throughout the rest of 2021?

Cordelia: an EP, some shows in Sweden and us taking a break to write new songs. We’re already looking forward to writing and trying new ways to write together.

Felix: What she said. Hopefully we can do all the things we wanted to do last year. I think we’re in a good place so it’s gonna be nice to get out there.