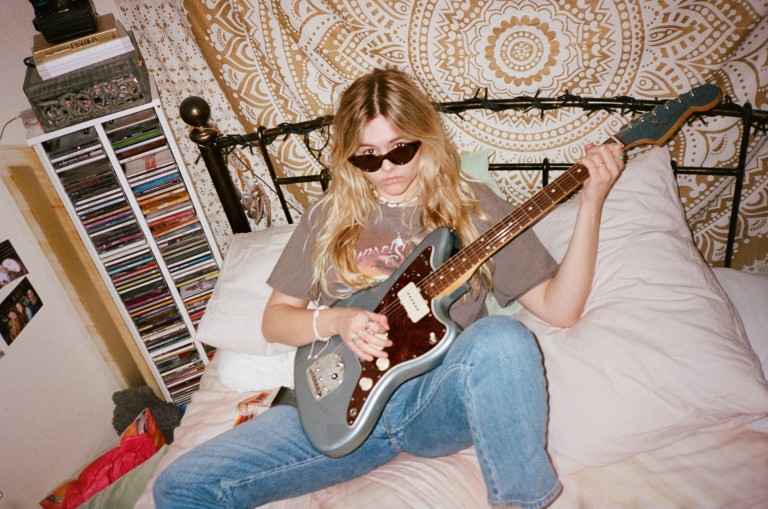 Cornwall based artist Bailey Tomkinson has released her new EP ‘California Fire‘ with a string of beautifully crafted singles, giving listeners a flavour of her brand new, sepia-tinged body of work. No stranger to classic rock sounds with contemporary spins, if Bailey hadn’t already put herself on the map, she’s firmly on it now. We caught up with the St.Ives native to discuss inspirations and her big plans for the summer.

Hi Bailey- congratulations on your new EP ‘California Fire’. The EP has an uplifting sound throughout, would you say that you make a conscious effort to make music with an upbeat energy?

Hey! Thank you for having me, It wasn’t really a conscious thing, more that it naturally emerged from the energy of the band. I wrote most of the material in lockdown when my imagination was going crazy so maybe it was a reaction to being kind of “pent-up” because when we were allowed to see each other again and rehearse, these songs sort of came roaring out!

Usually when I write, the lyrics come first, so with most of the EP I shaped the energy around them. However, when I wrote “When The Lights Went Out” I really wanted a song you could dance to, like “Human” by The Killers.

Your sound draws from multiple well-worn genres whilst still keeping things fresh- who were your main inspirations when writing this body of work?

Something that was really important to us with this body of work was that it felt like an authentic representation of our live sound. We wanted to make music that felt like us and where we came from.  People think of Cornwall as all sunshine, sand and surf and that’s definitely part of it and influences our sound but also there’s a much grittier side to life here too. I often describe our sound as “Kernowfornia” – surf-rock meets Americana/folk.

I was listening to quite a lot of 80’s rock as I was writing so there’s definitely some Springsteen, Billy Joel influence in there. We have Michael Underwood from Rex Orange County performing saxophone on a couple of the tracks which I think really brought that whole vibe to the songs.

I liked the idea of marrying that with other era’s though rather than just a straight re-telling, my tastes are quite eclectic. I love that Laurel Canyon sound from the 70’s and I think the narrative styling of the EP leans into that.  And from the 90’s I think the “Long Gone Before Daylight” album by The Cardigans is criminally underrated and was a big influence on this record.

You’ve got some exciting festival slots coming up this summer. Are you ticking anything off your bucket-list with these live dates?

Yeah definitely! I’ve always wanted to perform at The Great Escape and Wilderness, I’m very lucky to have been asked to perform on Bob Harris’ legendary UTAT Stage. There are loads of new festivals we’re performing at too like Wavelength’s Spring Classic Festival which is very my style as its surf-based as well as festivals like Rock Oyster and PandaFest (which is run by my boyfriend, so that one is always really special)

You’re not afraid to broach subjects that are close to your heart, with your 2021 single ‘Bright Red’ criticising the destruction of coastal headland for G7 meeting space. Do you feel it’s important to use your platform to trigger real-world change?

Definitely! Some of my favourite songwriters like Joni Mitchell, John Lennon and Bruce Springsteen have all written politically before so it wasn’t something unnatural,

I think of it like this…all politics are local politics, right? So, I might not be able to change the world but I can do my best to make this little corner of it a bit nicer, a bit fairer, a bit better.

It was pretty scary though; I had no idea whether I was going to piss some important people off and how they might react. And as the interview requests came rolling in from things like Radio 4’s The World Today or the FT or BBC’s Newcast, It was super-intimidating, I’m not a natural activist but I became hyper-aware of the responsibility that my small voice was carrying to tell the story of how this rich hotel was literally steamrolling our coastal headland and how just a mile from the hotel that the G7 were staying in the lap of luxury, 1 in 3 children are born into poverty. The reaction was actually amazing though, folks really rallied to the cause and the “meeting space” has been ordered to be removed and the headland be restored to its natural state, so we won!

And finally, what are your personal and musical goals for the next year?

I have a plan of things I’d like to get in place for the next 12 months and have already started recording/working on future material to release after the EP. One of the funny things about this industry is that you never know what to expect and things change so quickly all the time, I’ve got some exciting shows planned and hopefully another tour in autumn but with my band!

Personally, I’ve been really focused on my fitness and health outside of music, it’s become my hobby. I’ve been pescatarian for about 6 months now and I’m always at classes, gym or I’m surfing/ doing something water based. I find it really good for my mental health especially in a very full-on career, it’s good to have some breathing room sometimes. I’m always setting sporty goals for myself, pushing myself to run an extra mile etc or catch a bigger wave. I think balance is important, so I’ve got loads of personal goals outside of music, that I’m really motivated for.