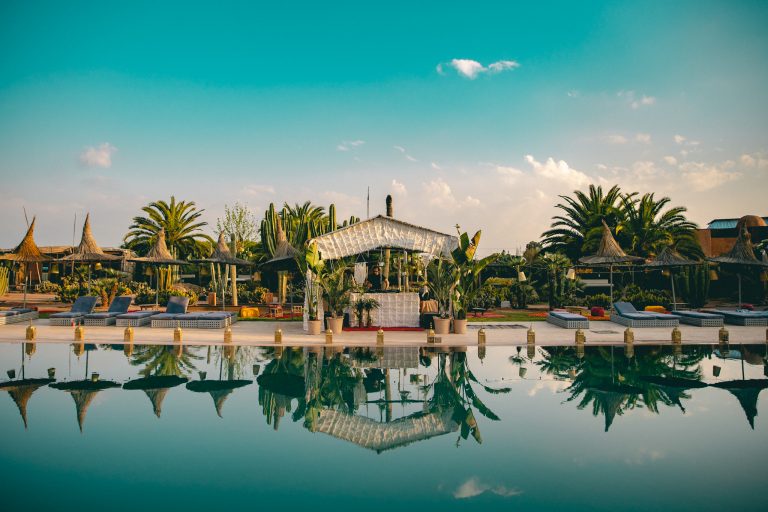 Beat Hotel, most famous for its legendary stage at Glastonbury, ventured to Morocco for its debut festival. A twenty-seven-acre Boutique Resort, covered in palm trees and cactuses, in the south of Marrakech welcomed a sold-out crowd consisting of all ages. Inclusivity was a key focus at this Festival, quotes by Allen Ginsberg were spread throughout whilst the organisers looked to bring a group “of howling spirits and curious minds” to the sun ladened event. This chance to escape during the final weekend of March drew in a group of likeminded people all looking to join the summer Festival calendar a few months early.

The festival delivered a genre binding line-up with a subtle focus on dance and featured the headline live acts during the peak hours when the subsequent dance stages closed. Featuring world-renowned acts such as Hunee, Maribou State and Young Fathers the event offered a piece of everything for the crowd. However, it was the rising stars on the bill that shone the brightest out of a special bunch.

The opening Thursday night saw the festival celebrate the African homeland on which it was based. Local talent Master Musicians of Joujouka entertained the crowd with several dance routines and an extremely unorthodox musical style. Awesome tapes of Africa closed out the night mixing undiscovered music that spanned across all continents. Playing off a cassette deck he achieved a sound that couldn’t be compared to other performers.

Friday night saw James Holden take to the stage with collaborator Maalem Houssam. Holden, known for his wide-ranging productions performed a very African inspired live set with Houssam taking the focus of the hour. Glastonbury headliners Maribou State bought along key collaborators Holly Walker and North Downs which helped to bring their electronic music to life when performed live. Performing hits “Feel Good” and “Kingdom” the act showed exactly why they were one of the most anticipated acts of the weekend.

The smaller “San Remo” stage saw some of the festival’s peak moments over the course of the Friday night. Legendary selector Andrew Weatherall bought a plethora of loyal followers away from the highly popular Palms Trax on the main stage. The crowded stage was rewarded with two hours of hard-hitting techno with the DJ never shying away from taking risks. This was followed by more of the same risk taking by the fast-rising starlet Haai. Given the tricky task of coming up against Hunee – arguably the biggest name on the bill, on the Friday night headline slot, Haai took us on a psychedelic road trip whilst still managing to feature fan favourite classics such as ATB’s 9PM ‘Till I Come’ alongside underground hits such as Axel Bowman’s ‘Nokturn’. Blowing the crowd away in the process.

A storm ridden Saturday night forced the San Remo stage to close, replaced with an indoor boiler room sweatbox which featured heavy hitting sets from Dan Beaumont and Lovefingers. Peach closed out the night with a four hour impromptu back to back with Job Jobse, featuring some of the hardest techno of the weekend. Never allowing the mood to dip and reflect the weather, the young DJ gave everything in what was one of the feel-good performances of the festival.

New wave Psych group Flamingods provided the most unique performance of the weekend. Originating from Bahrain, their style was a fusion between Western Psychedelia and the traditional sounds of the Middle east resulting in a sound dubbed “Exotic Psychedelia”. A very trippy experience. The final live act of the weekend saw festival headliners Young Fathers deliver a breath-taking high-energy performance. An incredibly relevant act for todays audience, the group were as politically charged as ever and delivered aggression, grit and emotion during the hour they spent on stage.

Closing out the festival was Gerd Janson, over the course of the final two hours the running back records boss had the whole crowd jumping with joy. Rarely having to look up to sense the mood of the crowd, he consistently hit the right spots playing hits from Bicep, Four Tet and Krystal Klear. Janson took everyone on a journey full of positivity, it was exactly what was needed, ending the weekend on such a bright note.

However, it wasn’t all about the music and the festival was keen to stress this. A key focus was also placed in curating the food and drink. Moroccan based Nomad Joined London’s own Berber & Q,who between them offered a wide range of unique flavours. With the options varying from traditional Moroccan cuisine to something your used to back home, it had something for all. Specially curated seminars took place in the speaker’s corner which featured talks from Andrew Weatherall, James Holden and Nabihah Iqbal. There was also a cinema which played films from independent videographers. A lot of thought went into the overall experience of event and this is something that it should gain credit for.

Considering this was the first time the festival had been launched, the event did numerous things right without any problems. Production value was as good as it could get, there wasn’t any issues with overcrowding and prices remained as affordable as the festival could keep them. The only thing that could have caused disappointment was the weather, which was relentlessly unpredictable. Perhaps the best thing it did was bring in a crowd that was one of the friendliest I had ever experienced, there was only positive vibes on display throughout. However., with the festival undoubtedly set to expand for next year it will be important to see if they can maintain the intimate setting and atmosphere that made this festival so special.