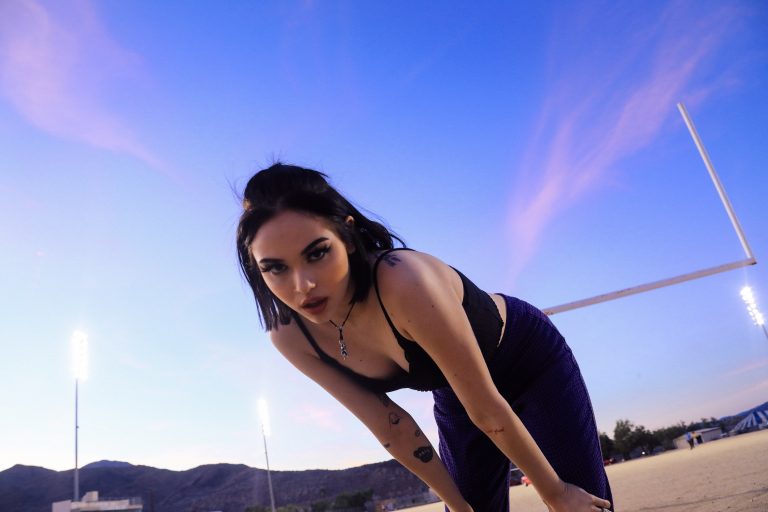 When introducing an artist, you usually pick what is unique about their music, or about them, and you go from there. Either it is the genre, a specific track that put them on the map, but in the case of Maggie Lindemann, it is hard to choose one thing.

As a 20-year-old, Maggie Lindemann already has multiple songs accumulating millions of streams with ‘Pretty Girl’ Cheat Codes remix going strong with half a billion streams. Her newest single ‘Friends Go’ is no different. Sounding like a future summer pop anthem, lyrics that will make you think and new visuals by Van Alpert soundtracking a short film ‘Death By Third Wheel,’ which you can watch here.

Maggie Lindemann is undoubtedly a full package. Something admirable about teens and twenty-something-year-olds making music is their undeniable lyrical honesty. Her music does not shy away from discussing mental health, that is a massive part of her life. With her social media reach, she will be able to influence her fans and navigate them in the right direction.

Speaking of her following, Maggie shares the perks as well as the downside of social media and how everything got started: “It’s crazy because when I released my first single once I was signed, it really took off. I’m really fortunate to have had the success I had so quickly, but it definitely was crazy because I was so new to all of it. Social media was so helpful but also had its moments where it wasn’t so helpful. But it’s nice to have social media so I can have that connection with the people who support me”.

To produce a relatable song, artists tend to dig deep into their personal lives, and that is exactly how Maggie gets inspired: “What inspires me is what’s going on in my life. I always write about stuff that’s actually going on in my life so that I feel a strong connection with all the songs I sing. So, for the most part, my life inspires me, and sometimes I like writing about what my friends are going through too. Also, a lot of random things inspire me, I could hear a cool sound or someone humming a cool melody or just anything really and can give me this motivation to make something cool”, she shares.

With her 2016 release ‘Pretty Girl,’ Maggie tapped into a topic that will empower girls and women all around the world. Growing up in the age of social media, where everyone judges you based on your pictures creates a whole bunch of body images issues and Maggie’s take on this is the following:

“I think it’s really hard. We’re in this era where people are SO critical of each other’s bodies and our own bodies. As a woman that’s on social media and just in Hollywood, it’s really hard seeing all these girls with perfect bodies. It definitely makes me super insecure at times, but I think it’s a really dumb thing to focus on. Everyone is different and has so many great things about them. I think the “perfect body” stereotype should be left. There is no “perfect body,” Maggie says how it is, so take notes girls.

When it comes to ‘Pretty Girl’ itself, Maggie explains the basis of the song and what it means to her: “A lot of the times I’ve been called stupid or been treated like I don’t have feelings because I’m this person that is through your screen. There’s this weird stereotype that “pretty girls” don’t have brains and are all the same, and I wanted to basically give a big ‘fuck you’ to that. People leave mean comments or call me dumb or whatever it may be, forgetting that I’m this real human. So it was just to show kinda that girls are more than their looks; we have opinions, we have stuff we want to say, and we aren’t all the same”.

Next up is ‘Would I’ a song that answered a lot of my personal questions. Maggie reveals what was going on her life when ‘Would I’ came to life: “I was in one of the darkest times in my life when we wrote the song. I was struggling a lot with my mental health, and with addictions, I was facing that came with that. I was at a low point, and I needed to feel like I wasn’t so alone. When I released it, I felt this sense of release. The fans where so amazing and it got such a great response. I think it built this really amazing connection with a lot of people”. As I previously stated, her authenticity and honesty are inspiring.

“I want my music to just represent me. I want when you listen to my music to feel like you know me and what’s going on in my life. I also talk a lot on mental health through my music because that is such a big part of who I am and my life and I feel like nobody really talks about it as deeply as they should”, Maggie speaks some upsetting truth here. More musicians should use their platform to talk about taboo topics to open minds and thinking of others.

Even by scrolling through Maggie’s Instagram, it is obvious she is a very visual person. The music video for her newest single ‘Friends Go’ got some star visuals by Van Alpert. They came up with a concept for a short film titled ‘Death By Third Wheel’ and Maggie addresses the reasoning behind this: “I wanted to do something different for the song. I could’ve gone the super story telling way with a typical video… but I wanted it to be more visuals and pleasing to watch. I thought the “death by third wheel” was cool because it’s a play on words kinda thing. It means LITERALLY, death. You see the car crashing and on fire and all this stuff, so ya it literally means your death”.

As another surprise hopefully coming soon is with Maggie’s dream collaborator Blink 182’s Travis Barker: “I actually have a collaboration coming out with Travis Barker as kinda a “live” version of Friends Go that I’m so hyped for it! I listened to blink-182 growing up with my dad, so for me to now have a song with him is so sick”.

For any future releases, Maggie is cooking up some ‘different and new sounds that feel very true to herself, hoping to connect with people.’ Maggie Lindemann is a force to be reckoned with that will probably say what you’ve been thinking for a long time, but you’re too afraid to speak up about. Make sure to check out Maggie’s music and get vulnerable with her.