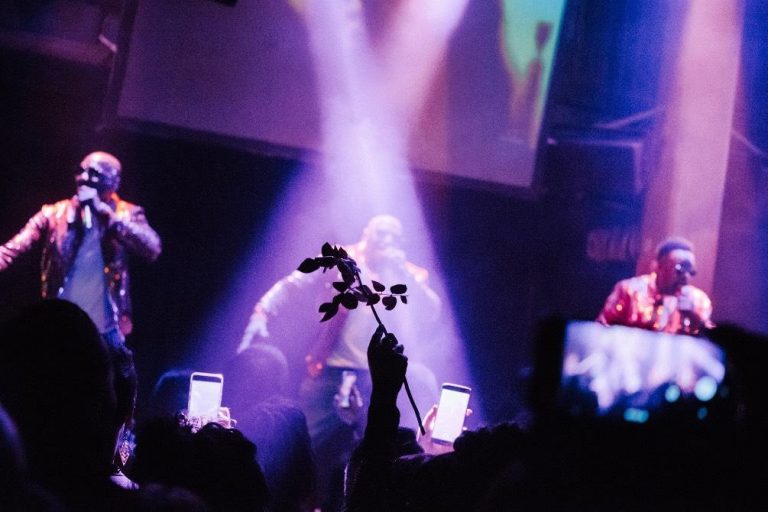 Blackstreet Live at The Jazz Café

The Jazz Café was blessed with the presence of 90s RnB legends Blackstreet for 3 days during the London segment of their 2019 European Tour. Everyone who knows R&B will know the hits ‘No Diggity’, ‘Don’t Leave Me’, ‘Fix’ featuring Ol Dirty Bastard, Janet Jackson ’s remix of ‘I get so lonely’ and The Rugrats theme song with Mya ‘Take Me There’.

Originally formed in 1991, Blackstreet has survived all the altercations most groups undergo during their prime and are still together 28 years and 4 albums later with their original members Chauncey Hannibal, Levi Little, Mark Middleton and Eric Williams. They opened their first night with “Don’t Leave” – (I can’t imagine this not being on anyone’s list of favourite sweet-boy songs!) with the crowd passionately joining in. 90s anthem after 90s anthem brought the venue back to listening to cassette tapes through meter long buses of radio players. Blackstreet undoubtedly delivered the best live performance I had experienced in a while.

Each song took us back to a time where capturing your crush’s attention meant serenading them from outside their bedroom window and writing letters professing your love – a lot more skill and work than just swiping right on your phone. It is later brought up in conversation with Chauncey Black that this is probably the reason why pre – millennium music will always have a better chance at standing the test of time. The dedication, skill, passion and craftsmanship that went into creating 1 song let alone an entire album was on a different level to how the majority of hits are now created.

The show was nothing but authentic, soulful and full of sweet nostalgia.

After singing at the top of my lungs to Don’t leave me and No Diggity, and failing terribly at trying to catch one of the 48 roses the they were handing out to build up to ‘Before I let you go’, I met Blackstreet backstage for a one to one Q&A session. My nerves evaporated as I started to get in to a relaxed conversation with the group to what almost felt like a chill session at a family BBQ with my uncles. Still dressed in their customised red sequinned jackets and a table of food between us, we had the best spot in the building!

Having accomplished so much and having worked with some of the greatest musicians and producers of all time, I asked Blackstreet what they would consider to be the highlight of their career. Chauncey Black tells me “The highlight of our career is what is going on with us right now because its been 25 plus years and people are still wanting to hear that Blackstreet music, the vocals and just the originality of what we do the best” Eric Williams chips in with “and also, the grammy that we won in 96” with other iconic winners including 2-Pac, Dr Dre and Michael Jackson to name a few.

Their songs are now considered R&B anthems and despite the feuds, Chauncey humbly confesses “we cant take all the credit because we had one of the best producers ever, Teddy Riley. His sound (new jack swing) was just so impeccable and innovative. When he got with Blackstreet and having worked with Michael (Jackson), his music just evolved out of this world so we have to give a big shout out to him as well”. Mark Middleton enthusiastically jumps in and proclaims “the biggest reason why we are still doing this is because of God’s favour. There are a lot of people who may be considered as more talented than us, with more hits than us but by God’s faith we are still together. We have fixed our problems and we can still do what we do and people love us so much”. Chauncey continues “We are so much older now…” the group snaps back- “HE’s so much older… we are well seasoned!” “…You know how the saying goes- black dont crack (everyone laughs hysterically). We are truly blessed. All in the favour of God so this is why were truly here, we are here because of him”. Levi Little adds “we truly love each other. All of us come from the same place…” another voice butts in with- “MOST of the time we love each other” “…its LOVE! its like brothers, like siblings when they get together”.

Still amazed by how relevant every song they performed still is to this day, I asked what their opinions are of music now and if they feel R&B will make a big comeback. “Yes.” they confidently respond. Chauncey continues “Like I said, the 90’s is the best era of it all. We’re going to put out another album and really, really make it… we just need to get off the road as we have been on the road faithfully for like 5 years now so we just have to pull the time.”

Titled ‘This is it’, the album is expected to drop this summer and the guys have promised to come back to London to give us more of the old hits they were unable to squeeze into the tour as well as their new, long awaited material. It appears that R&B is truly making a comeback and I’m here for all-of-it!