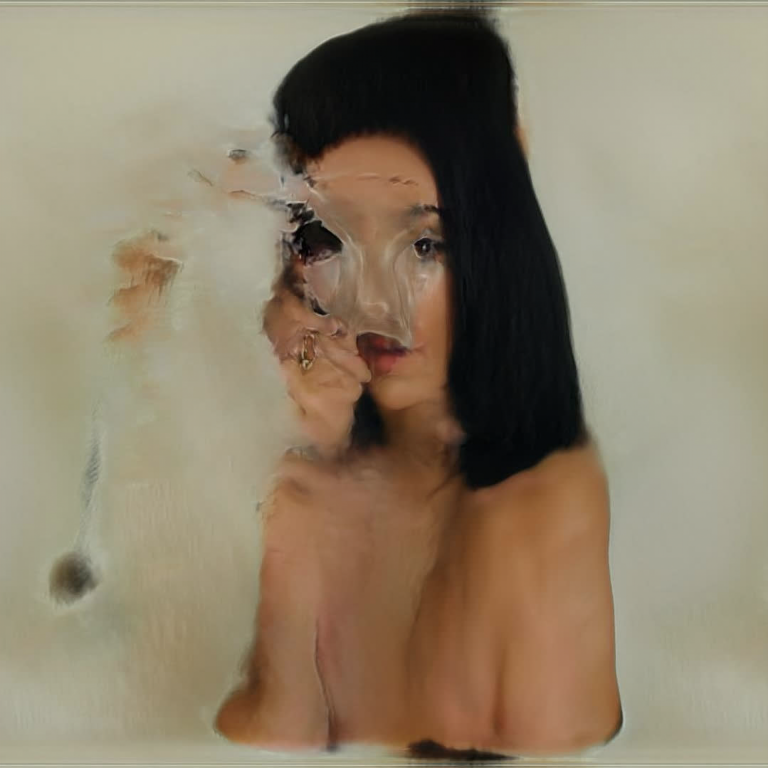 Debit, who recently made her European debut, combines the cerebral with the physical, pushing our bodies and brains to her cross-genre experimentation. She has been a visual artist and musician since infancy, and she founded the duet HDXD in 2012 after moving to Mexico City inspired by travels in South America and the United States. Before going to New York, she befriended and began working with several of the producers behind the trailblazing label and collective N.A.A.F.I.

She began her solo DJ and producing career by remixing Angolan tarraxa rhythms into Missy Elliott’s Get Ur Freak On for the Pirata 4 mixtape on N.A.A.F.I. Her Animus LP became the label’s first full-length solo record less than a year later. The album, a combination of ambient techno and underground dance beats, unpacks the psycho-sexual and political idea of “animus” by constructing a haunting, reverb-drenched world—industrial, ethereal, and almost unbearably captivating.

Debit just unleashed a new album, “The Long Count,” in advance of her European tour. This collection of music is based on Debit’s study of Mayan wind instruments including whistles, ocarinas, flutes, and trumpets. The 10 tracks on ‘The Long Count’ compose a ritual that is a few steps out of time — neither present nor past.

Debit views the Mayan instruments as ancient technology, part of a world that has been purposely obliterated rather than forgotten. And, while it’s hard to know precisely how Mayan music sounded, it is conceivable to communicate with history using current technology to perform a commemoration ritual.

In a detailed interview with Debit below, we uncover her journey as an electronic musician, explore her European tour and talk about shared memories at one of her latest performances at Rewire festival.

How are you finding the music scene? Is it what you expected?

The scene is really receptive to higher expressions of the musical medium and this is wonderful. Yes, I have always felt the music scene to be the coolest of all the scenes.

Tell me about the journey you have gone through, how have you got to where you are today?

I have been irrationally passionate about computer & electronic music ever since the first moment I discovered it was its own pocket of cultural history and most of my adult social and creative life has revolved around and been for it. Practically I started out making live electronic body/dance music, the got into machine hacking, circuit bending and making my own oscillators. Ended up in Doing when I moved to NY and consolidated the entire experience in the last 5 years as a producer & composer of electronic music – exploring and feeling invested in many genres within the medium.

Can you highlight some of the most important moments so far?

Studied for a year with Morton Subotnick. Being seen/ chosen to go on tour with Andy stott’s one of my contemporary musical heroes.

Boarding a plane literally behind Aphex twin after festival ceremonia where we both played (We didn’t talk though), and of course, DJing for Azealia Banks.

The sound you create is described as high-octane club music, why and how do you think it falls into this genre?

I really like and identify with this description & actually hope to continue to make music within this framing. Beyond the content & the message, and once the technology of the making & format is resolved, music is fundamentally a medium of the senses and my highest ambition is to continue to appeal to these in deep and intriguing ways forever.

Can you elaborate on the inspiration behind “The Long Count”?

My main cosmological references are the ancient (the late classical period) and contemporary Mayans (the EZLN). The Main technical Inspo was the use of artificial intelligence tech on archaeological instruments, specifically an archive of their wind instruments, in order to bridge some of the gaps we have regarding their musical use and composition within that research/aesthetic context. Thematically The Long Count, refers to the Mayan Long Count Calendar, which was a system of measurement where the origins and the end of the world, as they/we know it, would reset. Effectively I would say we are experiencing our own version of health, economic and political crisis.

How do you want people to feel when listening to this album?

Disoriented, ripped out of their realities, catapulted to the ether, dragged back through their guts, winded, as if they’ve gone through an energetic birth canal, and are finally born again. The long count is kinda the ugly part of the healing process. But it is so worth it because you get to experience something new (this isn’t so easy in our age of complete over-saturation)

Out of the ten tracks, which are your favourite and why?

7th day because it reminds me of the Rite of Spring (my bible).

We were thrilled to see your performance at Rewire, can you let the people who missed it what the best bits were?

The best part about the Rewire performance is probably that I had my own artistic breakthrough with the embodiment of the long count. When you prepare or rehearse for a show, it’s often about the score and the technical execution of it. That is ofc necessary and a big part of the job, but it needs to be more (for me) to be engaged and really let my soul manifest WITH the music, like the performance. At rewire, because the set-up was so perfect and exactly how I had envisioned it, I fully connected to the music by way of a new vulnerability.

I felt the pain of history, what these ancient instruments had seen centuries ago and since… I heard the sounds in their original context, as they probably were heard in ritual, sacrifice and war…it was completely cathartic and channelled in the show, newfound energy that isn’t even in the album. I think I set a new standard of what I want from myself when I interface my music with people in a live setting, and I hope to never forget this purpose and feeling.

The fact that so many people were able to grasp and embrace the long count which was the hardest, most complex work imaginable to me makes me really optimistic about my musical future. It’s been a load off and because I intend to do something less conceptual, and much more rhythmic/ easier I hope I can access more people.