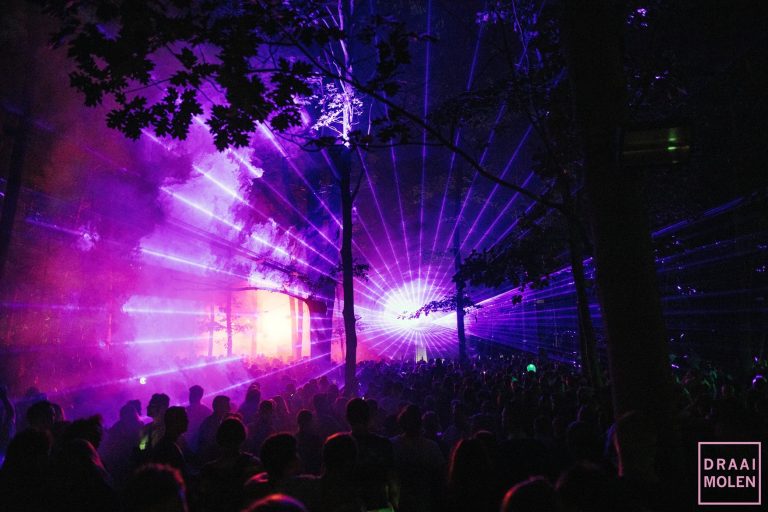 In the south of a Holland lies Tilburg, a small industrial city where metropolitan life meets the countryside. For six years it has hosted Draaimolen festival, a day event that draws in some of the best techno selectors. Last years edition saw it gain plaudits for its brave decision to curate a back to back set from Ben UFO and Nina Kraviz, something that had never happened before. This turned many heads across the industry, and we all wondered what would they do this year?

Well the answer is, they did a hell of a lot. Moving to the MOB Complex on the outside of the city they proceeded to turn this previous military used site into their new spiritual home. Six stages, each individually designed by visual artists created wonderous scenes at times. Although there were times where it seemed that they had been overly ambitious, something acknowledged by members of the festival team. A two-and-a-half-hour delay for one of the ‘Strangelove’ stages caused many to ask question. A planned butterfly garden also sadly failed due to overly high levels of acid in the soil.

Across twelve hours almost 13,000 revelers danced amongst the trees, Or:la on the mainstage played a surprisingly early 2pm warm up set. It was hard to gain the vibe as the festival was only starting to fill up. The young Irish DJ however played a set where house met techno and laid the foundations for the rest of the festival to follow.

Over at the ‘Aura’ stage, Barnt and HAAi played a 2-hour b2b and their blend of psychedelic techno had people dancing uncontrollably throughout. DJ Tennis followed with a set that matched the tone of his life and death imprint. The meeting of techno and left field beats drawn from across the globe made him a favourite of the crowd.

Home town hero Job Jobse stole most of the highlights of the event. Now firmly part of the festival’s DNA, he curated and helped design two separate stages named under his Strangelove event. The DJ even camped in the woods with the team for three weeks to ensure everything was finished. Ensuring the likes of Eris Drew were on the line up showed Jobse’s impact. The DJ at Strangelove 2 cooked up the crowd into a tree climbing frenzy with her Chicago style house. Constantly switching speeds and tone you never quite knew what was coming next. No one wanted it to end, including Drew herself who played 20 minutes over her set time, quite extraordinary.

This year’s ‘secret’ back to back consisted of Four Tet and Hunee. The predictability of it was a shame, the success of last year’s equivalent was its sheer contradiction of styles. It was just very underwhelming. Logistics in the end meant the b2b was only an hour long so there wasn’t any time to buy into what being played. Draaimolen also curated this on one of the smallest stages making for huge overcrowding.

The highlight of the day was Marie Davidson’s live performance at Stangelove 1. After her recent announcement that she was leaving the dance music scene, this was her final live show in Europe. She delivered unadulterated passion throughout. The calmer vocals of her studio recordings were replaced with aggressive shouting and rugged tones. The craziness was added to thanks to Jobse’s impromptu use of flairs, quite the ‘wow’ factor. Full of energy the Canadian spent the majority of the performace on top of the DJ booth, at one point jumping over Helena Hauff’s head. Bowing out on ‘work it’ Davidson showed Europe what they were going to miss.

Helena Hauff followed to close out the stage. Her impeccable talent to mix faultlessly with vinyl made for a fast paced final two hours. Slowly building the DJ kept us on our toes, mixing dark techno with lighter tones up until the final hour where EBM and industrial techno took over. In the past I had found Hauff’s sets to be repetitive, this wasn’t the case at Draaimolen. She was by far the most interesting act closing out the day.

Four Tet closed out the main stage where the production value outmatched the music on show. I’m a huge fan of his work however once you’ve seen one DJ set of his you’ve seen a hundred. A lack of variety has seen him replay the same hits over the past few months and at times it feels like he’s headlining because of his reputation. I had big expectations from this set and sadly it fell completely flat.

Huge credit should go to the visual artists who impeccably designed the stages, the Tunnel and Strangelove 1 and 2 stages were other worldly in their design. The latter stages however were too small and often overcrowding was a huge issue. Draaimolen also suffered from an infuriating token system where ques seemed endless at times. These were certainly teething issues; the new space was large and took a long while to get between stages. But the stages were too small for the 13 thousand capacity.

Honey Dijon was originally scheduled to play but sadly pulled out. Her style would have offered something completely different and unique that would have changed the tone of the festival. There were points where you moved stages looking for something different but found the exact same. Next years event needs more depth to its aesthetic. A move away from big names that didn’t deliver this year could be somewhere to start. Also curating stages to differentiate genres would help. Draaimolen owe a lot to Marie Davidson and Helena Hauff, who in the final few hours made this a memorable event.