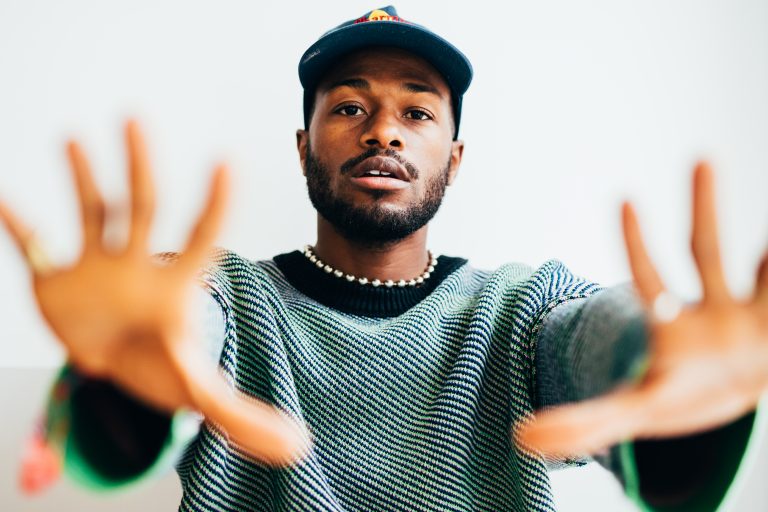 After selling out London’s Jazz Cafe, Duckwrth came through with a real rockstar performance. The man can move. If you’ve got to see Duckwrth at a live show or on his social media, you’re aware of his ability to cause mayhem full of hip trusting to his bangers like ‘KING KING,’ ‘FALL BACK,’ ‘MICHUUL’ or his newest single ‘Crush.’

We caught up with the American rapper and songwriter from South Los Angeles, California. Since the mid 2010’s, Duckwrth began to release songs on the Internet. Fast forward to today he’s putting out music that is Quincy Jones approved. We touch upon his beginnings and who helped him on the way, the meaning behind ‘The Falling Man and his newest single ‘Crush.’

Could you introduce yourself and say three interesting facts not everyone knows about you?

Hey, I’m Duckwrth. Three interesting facts- I’m tremendously double-jointed in both wrists, I can crack my big toe like 50 times over on command, and I’m into watching rugby matches, but I don’t understand the rules of the game.

He may not know or understand the rules of a rugby game, but Duckwrth mastered the art of music. As with any other moniker, we asked what it stands for. There’s always a story or a deeper meaning. Duckwrth is no exception: “Duckwrth is my mom’s maiden name. That’s it. It’s spelled with an O. I took the O out because I thought it would be better designed four on top, four on the bottom. Five on the bottom made me feel uncomfortable, so when I did the first logo, it was “DUCK” on top and “WRTH” on the bottom, so I took the O out,” he explains.

With a killer stage name, back in 2008, it all started with playing around on Garage Band recording over MF Doom beats when he knew. He knew this is what he’s supposed to do, “I thought I’d keep going, and now I’m here.”

It was very unusual to see Duckwrth naming people when asked how he got started. It really does say a lot about him showing respect to other artists that helped him out when it was all just in works. “My homie Reginald, he was kickin it with the group called NHT in the Bay Area, and I met NHT, and I met another dude named Amos, and they were all going to studios in San Francisco, and I would tag along and shit. And I was also recording with the homie Reginald and Nate in Philly. And that’s how I kind of got started”, he paints the picture of young Duckwrth in San Fransisco.

“Blue skies, somebody tapping they toes on the ground, the smell of rain on the cement, sitting on the toilet, anything can inspire me to write,” Duckwrth recalling random day-to-day experiences that may inspire him.

Dealing with someone as musically talented as Duckwrth, it is always fascinating to dig deep into how projects came to life. For example, his most recent project ‘THE FALLING MAN’ that features the moshpit favorite ‘FALL BACK,’ what inspired this EP title?

“I wanted to make a project that sounded like the score to a film that was a soft thriller. Something more like a Stanley Cooper thriller. The story would be about the fall of a king, and his fall is where his fears manifested — his fears to love, to let be and let go — and all his fears manifested in pretty much creating his inevitable demise. Thus, The Falling Man”, he reveals.

Later on, we saw Duckwrth’s summer release of ‘Crush,’ a track that has a superstar written all over it. ‘Crush’ is such a massive vibe, we asked if anyone particular inspired the lyrics: “I was in Brixton, London recording with Karma Kid and J Moon, and we were kinda just fooling around in the studio. Pause. And one of the homies just whipped his acoustic guitar out, and I was like that sounds pretty tight. So then he put that down, Karma Kid put some drums down and the lyrics “I could just watch you dance all night, and you would never let me down” just came out. And then I was actually writing it for a person that I knew I would see later on that night and I wanted to see her dance to it, so I write it for her”, he shares.

Now that you’ve watched the ‘Crush’ music video, you will understand my curiosity in Duckwrth’s dancing skills. Letting loose on stage is one thing, but it’s something else sticking to a choreographed dance. That’s what caught him off guard as well: “It was fun, but it was challenging cuz I’ve never been choreographed before. Taylor Edgin, the choreographer, really challenged the shit out of me. My background in dance is not very extensive, I just have a nice two-step, so learning actual steps for a video and going outside the realms of R&B was kind of uncomfortable, but rewarding — to see it all play out and learn these new steps and new moves”, he admits.

Duckwrth is on tour at the moment, but as soon as the tour’s done, he will continue working on his next album set to drop next year in Spring. Get ready for “Super Good.”

In this era of Tyler The Creator and Frank Ocean, Duckwrth brings you both – the rap that ends in mayhem and moshpits and the singing that will light up the entire venue left with no one speaking silently listening to Duckwrth’s talent. Don’t sleep on him!