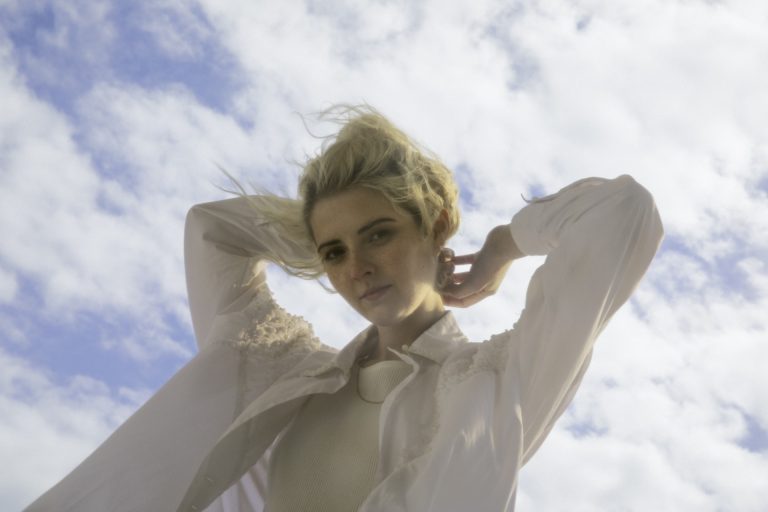 For four and a half years, Emily Burns felt a pang every time she had to show artists into a studio while working as a receptionist at the iconic Abbey Road Studios. Today, the 26-year-old singer/songwriter was being shown to a studio, where she performed for AKT charity.

Sitting in a car with her girlfriend, Burns is driving around London, trying to avoid the congestion zone, and shares her excitement for everyone to hear her new single, ‘I’m So Happy.’

The London-based artist dabbles with the idea of happiness’s inevitable expiry date. With lyrics like “I’m so happy, it’s a problem,” Burns compares the feeling we all chase to “it’s like being on a tightrope and knowing that one foot wrong could cause the demise of it all.”

During our chat, Burns looks back at her growth since her 2018 project ‘Seven Scenes From The Same Summer,’ her collaboration with JP Cooper on ‘Is It Just Me?’ and her work over the pandemic with her ‘Terrified Talk’s.

What have you been up to since things started opening up?

Loads haha … The most exciting thing for me has been getting back in the studio. Obviously with the lockdown restrictions, I spent a long time away from writing and collaborating with other people in person, so it’s been lovely to get back in a room with other creatives and make music again! I’ve also taken the chance to go out for a few nice meals with my friends and loved ones – God I’ve missed that!

Could you talk us through your journey, when did you know you wanted to be a singer/songwriter and how did you get started?

I knew from a really young age that I wanted to do music… I started playing guitar when I was around 8 and then wrote my first song when I was 10 – it was called “Shooting Stars” and it was pretty bad, but I knew I had a passion for music from then onwards. I started taking things seriously when I was in my teens and began playing a few live gigs at local pubs. That’s when I realised that people (outside of my Mum and close friends) thought I was good, and I felt like I could maybe pursue singing and songwriting as a career. I decided to send off some rough demos to my hometown radio stations and my local BBC Introducing started to play me on their show! They were so supportive of me and sent me off to a BBC Masterclass that was being held at Abbey Road Studios in London, which is where I really got things rolling with my career.

What was the inspiration behind your album ‘Seven Scenes from the Same Summer’?

That was my first proper release and I’m still so proud of it! Those seven songs felt like a coming of age moment for me… I wrote them about growing up, dating in my teens, discovering who I really was. It was very inspired by the trials and tribulations of relationships, sort of like a diary of my life at that point in time.

Do you see any difference between that project and the music you’re working on now?

I do! I definitely feel like both as a person, and a songwriter, I’ve matured and grown up since that first release. I’m experiencing different things in my life now… I feel more confident and self-assured and I think people will really be able to hear that in my new music.

What is ‘Is It Just Me’ about and how was it collaborating with JP Cooper?

I wrote “Is It Just Me?” about the feeling of missing someone and wondering if they ever think of you too. It’s about all the emotions you go through when you break up with someone, and asking if it’s just you feeling them. When I found out JP Cooper was up for collaborating with me on this song I was absolutely over the moon. I’ve been a fan of his for years, so to have his words and voice alongside mine on a record was incredible. Then when he wrote his own verse – the perspective he wrote from felt so perfect. As if he really resonated with the meaning behind the song. Hearing him sing it for the first time it was a moment I’ll never forget.

Could you elaborate on what ‘I’m So Happy’ is about?

I clearly remember the day I wrote “I’m so Happy” … I went into the studio and was in the best mood ever. I said to the guys about how good I was feeling, and how everything was going right in my life that day – “I’m in love, I have great family and friends, I love my job” and so on. We started talking about the fear that comes hand-in-hand with overwhelming happiness, the worry that something is bound to go wrong, even when it might never. That’s where the idea of “I’m so happy, it’s a problem” came from… the idea that sometimes happiness can be painful, because you feel like you’ve got so much to lose. It’s like being on a tightrope and knowing that one foot wrong could cause the demise of it all.

How did you come up with the concept for the ‘I’m So Happy’ music video?

Everyone knows what if feels like to really love something. The feeling of desperately wanting something to last forever and the terrifying voice in your head saying it might not. I wanted to get that fear across with this music video and for people to watch it and wonder “WHY ON EARTH IS SHE DESTROYING ALL OF THESE BEAUTIFUL THINGS!?” The idea behind it was taking something perfect and ruining it, due to my own anxieties and worries. Maybe people will relate, maybe they’ll think I’m crazy haha

What made you want to start doing your Intimate Zoom calls titled ‘Terrified Talks’?

I released a song called “Terrified” last year, which was about being scared of the future – even though you have no idea what might happen next. It wasn’t actually at all inspired by the pandemic, but I feel like people really connected with the song because we were all going into this scary lockdown and didn’t know how long it would last for. Lots of people reached out to me saying that they felt scared too … so I thought it would be really cool to invite people to come together on Zoom and talk about how they were feeling. People shared their own experiences and spoke so openly about their emotions. It was a really beautiful thing and I’ll definitely keep doing them in the future!

Did you use to work at Abbey Road Studios?

I did! I was the receptionist there for 4 and a half years! It was so fun and a perfect way for me to start building my musical network. Abbey Road is a really magical place, everyone there has SUCH a passion for music and I’ll be forever grateful for their support.

How did it feel performing from the Abbey Road Studio in aid for AKT Charity?

This was an experience I’ll never forget… getting to return to the studios and play a show from there as an artist in my own right was incredible. When I was the receptionist, I used to show people to the studios and, don’t get me wrong I loved it, but I’d always feel a little pang of sadness walking away and having to sit back down at the front desk. So to go back and perform there was amazing and doing it for a wonderful cause like AKT felt very special.

Are you excited for your upcoming tour in September? What are you most excited for?

I am SO SO excited!! Through lockdown, it’s been amazing to perform live stream shows and find new ways to connect with an audience online. But, there’s nothing quite like the feeling of playing a real live show … being in a room with people all singing along together and just having a good time. It’s an energy that simply can’t be replicated online and I can’t wait to feel that again. And to see my fans!! It’s been way too long and I can’t wait to travel and meet people face to face again.

Are you working on any projects at the moment?

I have some really exciting music in the making at the moment… loads lined up that I can’t wait to share. And maybe even a few more collaborations in the pipeline 😉