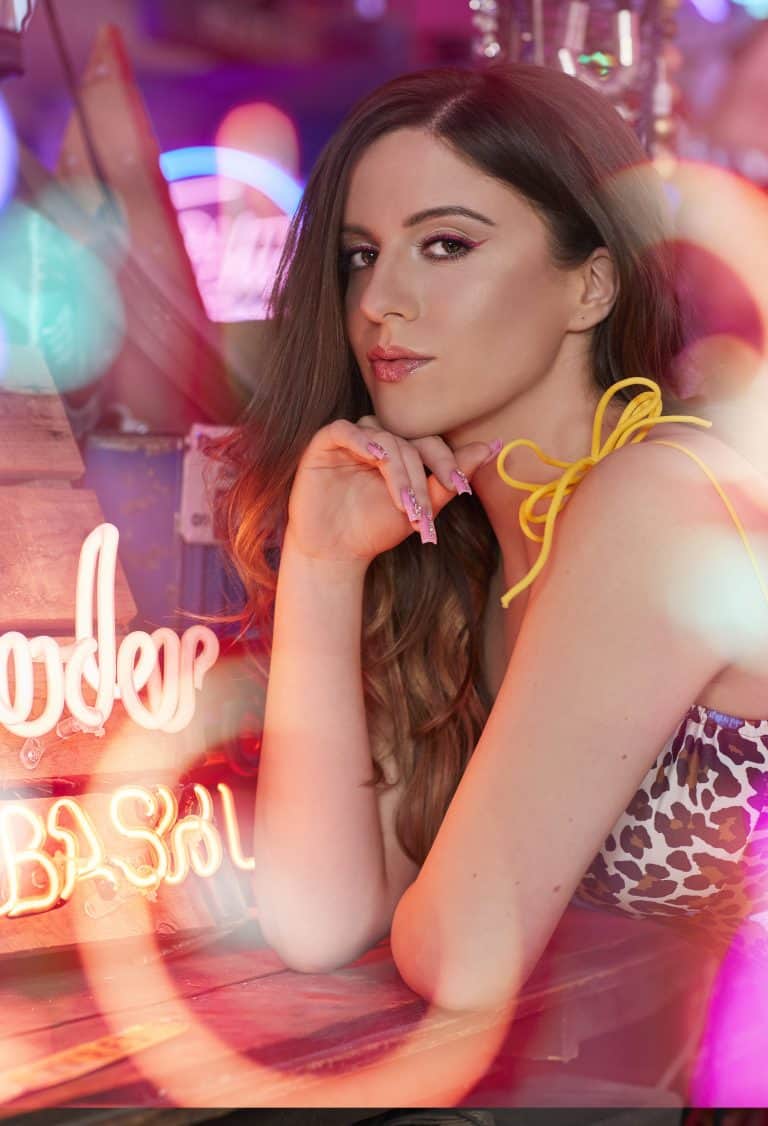 Eve-Yasmine premieres a music video for her empowering single ‘Glow Up.’ The London-based singer/songwriter of Moroccan and Spanish origin builds on her hard-working personality and lives her life wanting to know she’s expressed everything. Eve-Yasmine is set to release her 3-track EP titled ‘Femme Fatale’ consisting of songs focusing on female desires with a splash of Frenglish lyrics.

On top of elaborating on the ‘Glow Up’ music video, we got to know more about Eve-Yasmine, how she was a musical child, her career ethos, and what she has in store with her upcoming EP ‘Femme Fatale.’

How would you describe yourself?

How did you get into music? Were you a musical child?

Music was always a big part of my life, I definitely was a musical child. I had bad stage fright but I loved performing, I used to dance – Street Dance in particular and grew up listening to a lot of R&B. My Dad plays keys, my Mum sings but I had no connections in the industry. The turning point for me was when I was 17 I met a music producer who encouraged me to pursue it seriously, I auditioned for a professional Gospel Choir and started going for it from there.

What/who was your biggest inspiration behind pursuing your music career?

I believe if you have an ability or skill that can be shared with other people you should share it. I want to live my life knowing I have expressed and given everything. Once I started receiving messages from people that my music made them happy or helped them somehow I realised how powerful music is even at a small independent level. Music is my biggest fulfilment and that’s what urged me to pursue it ultimately.

Could you elaborate on the creative process behind ‘Glow Up’, the song and the video?

S.B.O. & I had previously worked together on ‘Wild Run’ I knew I wanted a follow up track that would compliment the same sound but also express a different mood. He is a sick producer! I’d been wanting to write a more uplifting song as usually I lean towards darker lyrics and I liked the phrase ‘Glow Up’ and the idea of writing a song about our grind, our growth and ‘Glow Up’. I’m someone who gets inspired by concepts that’s when I tend to write my best.

He produced the beat and then while I was in LA I recorded the vocals with Redah – a multi talented producer/engineer/singer (credits include Universal Music / Spider Man Into the Spider Verse) who is also of Moroccan origin – we had connected beforehand on instagram. We had a late night session and it was so much fun to record, I love Redah’s attention to detail.

For the music video I was determined to find a location that had neon lights to play on the word ‘GLOW’ I like to find unusual locations so God’s Own Junkyard – a warehouse cafe full of neon lights used in movies was a pretty amazing find! (Shout out to Melisa for the recommendation).

I take time to find the right people to work with and tend to be drawn to people who are inspired by and have a strong fashion background. I really enjoy producing videos and finding each talent member to put a team together. Tamara Tott was on make-up & hair, Dawn Marie Jones on photography and lighting – both super talented creatives. This was the first time Mal Visuals & I had collaborated on a video together, he was amazing to work with. I styled my outfits, over a couple of months I searched for cool accessories, colours and made sure I squeezed in the outfit changes even though we were short for time on the day!

You recorded the vocals for Glow Up in Los Angeles, would you confirm the creative energy in LA is different to other cities?

Definitely, it is. I had the best time over there, but also I think we bring a different energy when we arrive – we have time off, we’re behaving like a tourist, taking a genuine interest to people and our surroundings. I think travel is one of the best ways to grow and get inspired. The level of talent in LA was inspiring and motivating, I can’t wait ’til I can visit again!

What else could you share about your upcoming project Femme Fatale? What topics will you be touching upon?

Wild Run, Glow Up and Femme Fatale are all produced by S.B.O and are pretty empowering focusing on a female’s desires, self-love, powerful female characters and moves ‘I’m so smitten, always driven’ ‘I love this phase, love the moves I’ve made’.

I also touch upon the double sides of romance -‘My love scene, my bad dream’ and inconsistency, Wild Run and Femme Fatale have quite a cinematic feel and both share Frenglish lyrics.

Any more singles before the release of the EP?

I will most likely keep my debut EP as a 3 track release, I thought it would be more fun to release them as singles first – it’s a ‘waterfall release’ and then upload them together under one EP title ‘Femme Fatale’.  I’m proud of this project, I feel I’ve found my sound now and know the direction I want to take. I can’t wait for you to hear it. 🙂