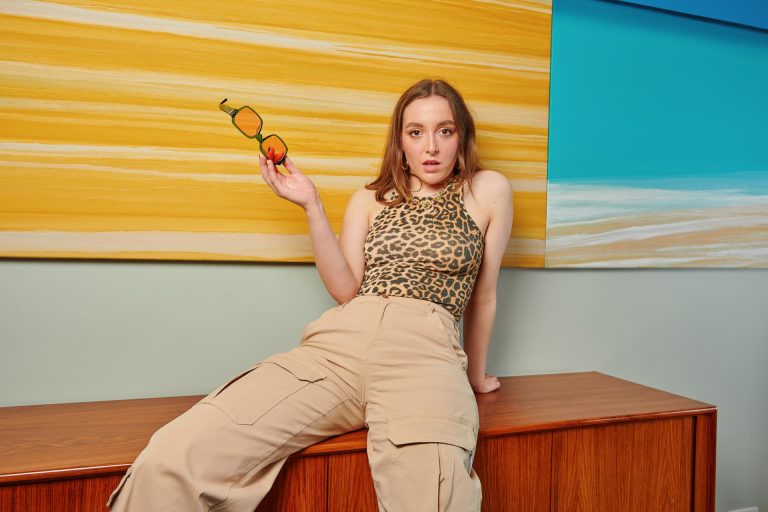 Get To Know Flo Gallop

The last year has seen a grey cloud looming over us, so perhaps we need some sunshine? Meet Flo Gallop, the walking, talking, singing beam of warmth spreading her infectious energy and good vibes. After the release of her debut single ’21’, Gallop has been on a rollercoaster of single drops treating us to her charming and feel-good music. Reminiscent of Lily Allen, her honest, witty lyrics are glazed in a quintessential London accent, making Gallop a unique force of a punchy-pop nature.

Now, Flo Gallop is dropping her fourth track since the start of 2021, with her new single ‘Up‘. Showcasing, yet again, her undoubtedly high vibe production with pops of bassy trumpets and vibrant guitars, the song shows us just why we love the young artist so much. With lyrics like, “I might not be your cup of tea but I’m your shot of Tequila”, Gallop brings relatable themes with a hint of sarcasm. We spoke to the songwriter about all things music, the new track ‘Up’ and what the rest of 2021 looks like for the Londoner.

Let’s take it back – what’s your earliest memory of writing music?

Actually I have a memory of this, probably being about 6 or 7 sitting in our music room at home (it was actually just a study room but had a drum kit, piano and some tambourines so we called it the music room) I remember my dad sat at the piano writing a song and me sat on a green armchair trying helplessly to write something that was of any interest to my dad, although I don’t think what I wrote got put into that particular song it’s definitely the first memory I have of writing music and being interested in writing.

Were there any moments as a child you knew you would want to pursue music full time?

Always. I was a dramatic kid, a serial attention seeker, I loved singing, dancing, and putting on shows for my poor friends who were probably just like ‘literally what is this girl on’ haha. For me, it was more of the entertainment aspect, I just wanted to make people laugh and smile and have fun. I still do, best believe I’m cringing as I’m writing this but I have nothing else to say on it. It’s something that I feel I am here to do lol.

Before dropping your debut single “21”, how did music sit in your life? Were you writing or performing?

I was doing the rounds of open mics, writing, and working with my lovely band. It was always very much at the forefront of my mind, even when I was working all the odd jobs I’ve done over the years they would be to work around music. I was constantly thinking about it, I have to say, the most frustrating part was not being able to have anything to show for it. So at least when 21 came out it was cool to be like THIS IS IT, GO STREAMMMM! Finally being able to have something to represent me as an artist was really exciting.

You have just dropped another bright pop track “Up”, congratulations! Talk to me about the inspiration behind this tune.

Yayyyy thank you!! The inspiration for ‘Up’ actually came after ’21’ was released. I found myself answering a lot of questions about me and my music and if I worry about what people will have to say about it, my response just fell to how I have always felt since I was at school… I am what I call a ‘marmite person’  that means you either get it or you just don’t & that’s ok, not everyone is gonna like you or what you’re doing. It’s good to be the sort of person people can either love or hate in my opinion. So, that is where it came from and it’s responding to that in a positive way and not feeling disheartened when you’re not someone’s favourite person because at the end of the day it doesn’t matter. As I say in the song you’re not gonna be everyone’s cup of tea, more importantly be someone’s shot of tequila!

What were you aiming for with your production on “Up”?

Fun, energetic & colourful the production needed to be as bright as the song in my eyes and I think it completely works. It feels good and summery. My friend said to me and I have to say I kinda like this analogy ‘it feels like the song you hear on a Monday morning at 7am when you get in the car to go to work and it’s too happy for your mood’. In a nutshell I think she’s bang on, it’s got the energy none of us have at 7am on a Monday hahah. The producer was Patch Boshell and after one conversation he pretty much got the vibe straight away. I like the journey it takes and when you hit the middle 8 I love that dip into sort of a quirky summer beach feeling too, it’s such a contrast to the London lyrics.

Your lyrics are entirely unique, who do you think has had the most influence on your lyricism?

I mean, it’s funny because they normally just come from things I’ve said/thought and have stewed on for a while. The marmite lyric for example and the Phoebe Buffay lyric, people have always said that about me and I’ve definitely used them to describe me so the song ended up pretty much being based off those lyrics and working around them. ‘Chasing after You’ was written as more of a push back at my feelings so that was influenced by how someone had made me feel.. I think it just varies from song to song, different things work, different things inspire you but I do constantly make lists on my phone of interesting things I see/ cool little hooks or even just words that rhyme. Influence wise the most clear is Lily Allen & Kate Nash because I like their lyrics for being quite striking and shocking at times, you just don’t know what they’re gonna say next but other influences of mine include Catfish & the Bottleman, Oasis (for sureeee) & even Billy Joel. They’re who I listen to and love their lyrics so I do feel like they’ve surely inspired what I am writing

How does “Up” compare to your previous single?

They’re completely different and show a completely different side to me as an artist, ‘Up’ is about me at my top and feeling my best but ‘Chasing After You’ really did have a sadder undertone because as I said I was responding to hurt (albeit in a positive way) but still. I want to have a complete mix of feelings in my songs, it makes a tune for each mood

You’ve been compared to the likes of Lily Allen, do you think this rings true?

Hahaha would love it to be true, she’s cool isn’t she. A major influence of mine. Storytelling lyrics with chatty and funny elements. They’re defo things I’ve taken from her.

What do you hope to inspire through your work?

Happiness, I want people to be happy! Also I would love to inspire people to consider writing and singing purely because that’s why I started because I was inspired by artists so I would love to be that person for someone else. That would be really cute

How has music been over the last year with the pandemic? Has it affected your videos or recording process?

Yeah! Its been nuts. Yano what, it’s hard to complain because as terrible as the pandemic has been I did also release my music right in the middle of it and I was blessed to have had that time during it to be working on the releases, my dad is also really into music so a couple of the lockdowns I spent at his and I just feel like it was time we never would’ve had. We have timed everything right so far and it hasn’t impacted anything that majorly. What I’m starting to realise now though is playing in a band and ‘pingdemic’ don’t bode well together. I’m trying my best to come up with solutions but as it stands that’s probably the biggest thing that is quite hard to work around

Growing up in London, how do you think your lifestyle and British culture has impacted your work?

Well London is just wicked, there’s something on everywhere you go and I think that’s what has inspired my energy, I mean you see something at least a little bit weird everyday. That in itself is something to write about. There’s so many people to watch and talk to and things to do. I love it and I always think how on earth did I get so lucky to be born in this wild city. After lockdown was the best because I stayed out of London so when I came back I just had this feeling in my heart like WHY IS LONDON SO AMAZING haha anyway I’m babbling but yeah luvvvv it and I’m grateful for how much the city has inspired me

Who are your top 5 dream artist collaborators and why?

Oh so many, but –
Dan Smith-Bastille-I love his writing and his dance moves on stage
Aloe Blacc-his voice moves me
Tom Grennan-because I’m obsessed & inspired by everything he does
Kesha- she’s just a boss and I think her lyrics are mad cool
Miley Cyrus- have followed her journey from the very start and have loved the entire way, very cool and powerful woman!

Everything and anything that comes my way, I feel like I’ve just got here and now we are gradually coming out of the pandemic. I’m literally up for it all! There will be more music, videos & hopefully some funky gigs but stay tuned over on my socials and I promise we’re gonna have fun!