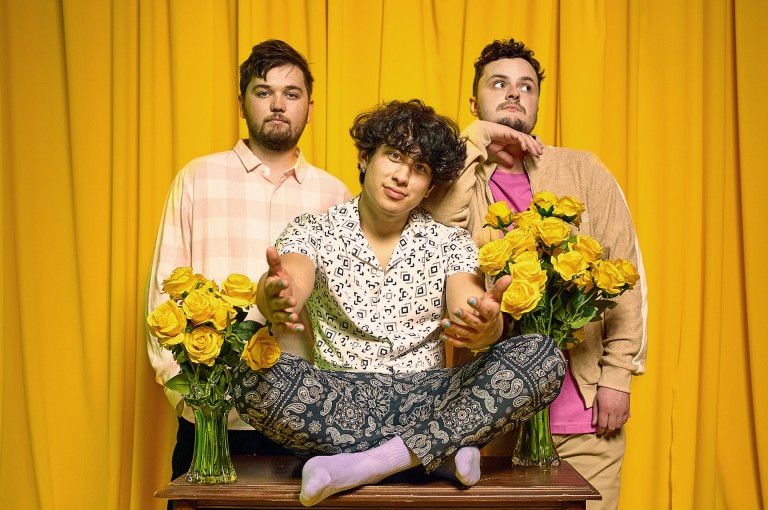 Get To Know The Happy Fits

What we once read about at school and thought would never happen in our lives is essentially taking over our news channels and Twitter feeds. The crippling anxiety of climate change and other societal issues are not just stories anymore, and Brooklyn-based three-piece The Happy Fits is finding its place in this broken world with a new record, ‘Under The Shade Of Green.’

This alt/indie-pop formation recounts its internal thought process about the current state of society in a 12-track long album with ‘Around And Around,’ depicting the pandemic’s double-sided feeling of vertigo.

Calvin, Luke, and Ross are the brainchildren behind The Happy Fits. A friendship once formed in a freshman year’s Latin class grew into a spontaneous melody and songwriting. In our conversation, Calvin elaborates on how they decided to drop out to pursue music full-time.

The new album ‘Under The Shade Of Green’ is a mature outlook on the societal downfalls while maintaining a 2000s indie/rock sound. The Happy Fits delivers relatable; thought-provoking lyricism presented more lightly to speak to the masses and use its growing platform for the better.

Get to know The Happy Fits in our chat below.

Could you each introduce yourself and what you do?

Calvin: I’m Calvin and I play cello, sing, and write most of the songs!

Luke: I’m Luke and I play drums and sing!

Ross: I’m Ross and I play guitar and also write!

How did you come up with name ‘The Happy Fits’?

Ross: We were about to go to the recording studio for the first time ever when we realized we didn’t have a name. Calvin recommended “Smiley Fits” because he was always smiling and when he played it looked like he was having a fit of some sorts… The name was awful but my mother suggested “The Happy Fits” and the name stuck.

How did you even decide to put together a band? How did you know each other before?

Calvin: Ross & I were in the same Latin class in high school freshman year and got acquainted with each other. There weren’t many musicians in our high school and definitely not many that were into non-mainstream music. We started talking about the music in Inside Llewyn Davis  and decided to get together and play some covers. We covered Andrew Bird, George Ezra, and The Milk Carton Kids but none of the covers were very good. One day, Ross showed me the instrumentals to what became Dirty Imbecile  that he had made on his looper pedal. I took home the instrumentals and wrote the words and melody and the next day took it back to show him that we had just written a song together. We recorded our first EP Awfully Apeelin the summer before heading off to college and hired Luke to drum on the album since he was literally the only drummer we knew at the time. We dropped the EP the same week we left our separate ways to go to college and within the first week of the release, it started blowing up on Spotify due to it getting on the Fresh Finds playlist. All three of us couldn’t think about anything but the band and the potential and opportunity we had just been given, so we decided to dropout and go for it. 5 years later, we can say it’s one of the best decisions we’ve ever made.

Tell us what your single ‘Around Around’ is about?

Calvin: Over the pandemic, there was that constant feeling like every day was the same and we were just going around and around in a circle. At the same time, major historic events were taking place CONSTANTLY; like the BLM movement, the crazy US election of 2020, and the insurrection on our Capitol on January 6th. So while I was stuck living in our old practice space watching the days fly by, I also had this sense of vertigo like the world needed to slow down for me to catch up. So I wrote ‘ Around And Around’ to explain that double-sided feeling.

What is the core theme of your album ‘Under The Shade Of Green’?

Calvin: I think I feel a general anxiety about the future of our society and planet, and I’m sure I’m not the only one. I remember learning about fascism in school thinking it was something that would never affect me, but here we are in 2022 and the belief in otherism and racism has never been more prevalent and tangible. I also remember learning about climate change back when I was in middle school thinking that we’d totally have that sorted out by now, but instead it now feels like we’re running full speed ahead to the point of no return.

What is the symbolic meaning behind the colour green?

Calvin: Green here represents money and nature. As we head closer to the point of no return with climate change, those who will be shielded from the impending disasters will be those with wealth and money. Meanwhile, the rest of us will have to find a way to shield ourselves from global warming and find our own “shade” as it will.

Do you roughly know how you want your albums to sound like before it is a finished product? What did you want to express in this project?

Calvin: Definitely not. I always go in to writing the songs with a melody-first attitude, because if the song is catchy enough, the sound and production all comes second. We grew up listening to the indie rock of the 2000’s so we always try and recreate that rocking, euphoric vibe.

How was your pandemic experience? What kept you sane?

Luke: The pandemic was a lot, but honestly our fans kept us sane. We got really into live-streaming and would do it like once a week to a few hundred fans every time. It was nice to still be able to play music to an audience.

What music were you listening to that helped you stay positive and inspired?

Ross: We loved listening to everything. Lunar Vacation released a really cool album recently and Joe P who we toured with was releasing a lot of bangers.

Luke: I was listening to a ton of Royal Blood.

Who do you work with on your cover art? How do you come up with the concepts?

Calvin: We work with our producer/manager’s wife, Elizabeth Al Adhamy, when designing the record layouts – and for this one she hired visual artist Manny Carbajal to sculpt the dollar bill pineapple. I remember wanting to make this album cover meaningful, whereas our first album cover for Concentrate was purely aesthetic. Our old tour manager Tyler Miranda basically taught me about the colonization of Hawaii during the pandemic and at the same time I was reading a lot about the cycle of wealth and power. We always had fruit on our covers so choosing the pineapple knowing it has such an imperialist and capitalist connotation felt right to use on an album with songs about our impending peril due to unsustainable growth. I took the picture of the flaming money pineapple in Ross’ garage when his parents were on vacation and Elizabeth edited the photo to make it look spectacular.