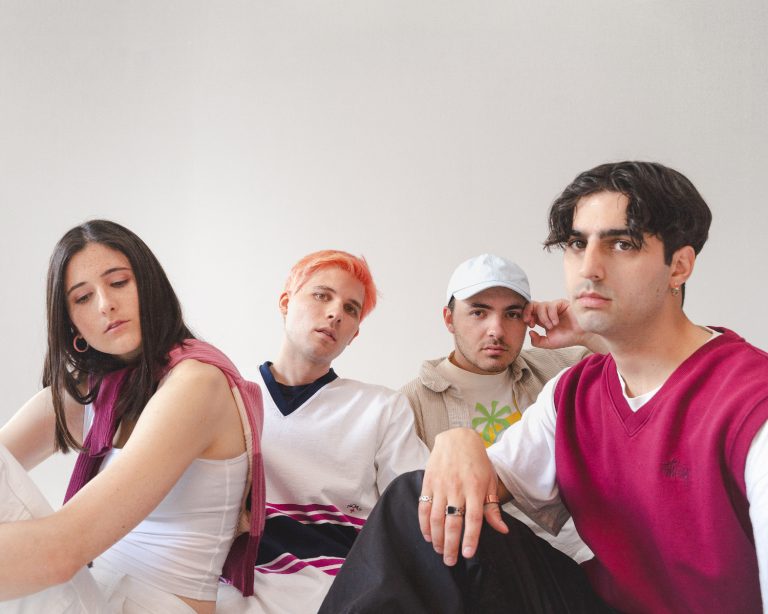 Getting To Know Valley

Four-piece, Toronto band Valley have just dropped their latest single and music video for ‘SOCIETY‘. A song of acceptance, it touches on the foursome’s way of coming to terms with their identity and following their authenticity in their creativity, knowing they can’t please everyone. No short of alt-pop heaven, the track is reminiscent of Fickle Friends, with a gentle nod to ‘Teenage Dirtbag’ and a sprinkling of punk spice.

The group shares, “SOCIETY tells a story of how our career can sometimes feel. We exist within an ever-changing creative industry full of opinions and music machines making everything go round. At times, what you truly have to say as an artist can feel diminished or not as important when it comes to the context of making a product or something that people will label as sellable and listenable.”

Their fresh and energising tones radiate brightly through their soundscapes. ‘SOCIETY’ follows the success of their early 2021 release “Like 1999” which gained millions of hits after the unfinished teaser of the track blew up on TikTok.

Getting ready for a North America tour, we sit down and talk to Rob Laska and Alex Dimauro from Valley about what’s next for them.

Firstly, congratulations on the release of ‘SOCIETY’! I wanted to turn back the clock quickly – tell me about the formation of Valley? I heard it was accidental!

Hey!! Thanks so much 🙂 Valley was formed completely by accident! Me & Alex went to highschool together and played in a bunch of local bands, Karah & Mickey were also in one! We lived one city apart! My sisters friend worked at a studio, so me and Alex decided to book some time to record!We ended up being double booked and the rest is history! The first song we ever covered as a band was Everywhere by Fleetwood Mac, which we later found out that Fleetwood Mac met in a very similar way…so everything happens for a reason I guess!!! Still can’t believe that happened, I don’t think we would’ve met if it wasn’t for that day

It’s quite incredible. We’re so lucky. I like to think Toronto is L.As secret weapon haha… I feel like so many people don’t know how many artists, songwriters and producers are originally from Canada!! Growing up going to shows here and  experiencing the city through battle of the bands and late nights at venues meeting everyone that makes the scene what it is was such a blessing for our band…so many of our close friends we met years ago just being involved playing shows here! Now everyone’s gone on to be amazing writers, producers and artists taking over the industry!! Makes us so happy.

There’s way too many to name but I’ll name a few that stood out for us collectively:⁃ SOUR, Olivia Rodrigo⁃ Justice, Justin Bieber (we still wake up with these songs stuck in our heads!)⁃ Higher power by Coldplay (hugely anticipating their upcoming record)

What’s your vibe and aesthetic inspired by? Is there any artist, movement or era that resonates most with you all?

We take inspiration from so many different places!! Movies, lifestyle magazines, Pinterest, everyday life but I’d say a big one is hanging out with our friends and people we surround ourselves with (who are all cooler than us). We also look backwards at different eras and pick bits and pieces from the past that we love or feel bold! Coldplay has always been THAT band for us…They’ve had such a long and fulfilling career while constantly pushing the envelope with their brand and visuals while still remaining relevant. That’s a special and rare thing these days that we aim to accomplish with Valley.

What’s the backstory behind your new single ‘SOCIETY’?

SOCIETY started in L.A. around November 2019! Karah had brought a heavy and personal concept to the writer we were working with that day! The topic was shut down because it felt too heavy for a “pop song” making it less accessible.

During the session, I remember Karah stepping away for a bit and writing on her phone! The next day we had a session at Andy Seltzers (who is the honorary fifth member of Valley haha) and we finished writing the song! We really wanted to channel / pay homage to songs we were obsessed with growing up like All Star by Smash Mouth and You Get What You Give by The New Radicals. That push and pull with happy melody but frustrated / slightly more serious lyrics is what really makes those songs shine! We knew SOCIETY needed that sonic and lyrical juxtaposition to really drive our point home!

Karah really said it best: “SOCIETY is purely about the internal balancing act that many artists experience when owning a narrative. Do you “dumb it down” so that more people can relate and experience escapism with your song, or do you unapologetically speak your truth with the hope that some people also may relate to your hardships?”

How does this track differ from your other releases?

I think the interesting thing about SOCIETY is it’s a song we wrote a couple years ago now, but it somehow became more relevant over time. Obviously we want every song to be relevant at the time of release, but some capture a previous moment in time for us, this one is just very on point and timely.

The new music video for ‘SOCIETY’ looks like it was fun to make! Tell me more about the creation of it – any funny moments that stand out?

It was an incredibly fun video to make, yeah! It really has a little something for everyone and in our opinion, really drives the point of the song home. I also got to dive into the roll of “big wig” label exec and try out my acting chops again (it’s been a while)! The whole experience was incredible and we feel blessed to have the perfect team to help us execute our collective vision. We can’t stress enough how important our director/ cinematographer (Oliver Whitfield-Smith and Shady Hanna) have been throughout the whole process, along with the rest of the team!

Where are your top 5 places/venues across the globe you would like to perform at?

Omg so many! The first pick would definitely be Scotiabank Arena here in Toronto or Budweiser Stage!! Red Rocks would also be pretty damn cool….maybe the O2 in the UK…also Radio City Music Hall!!!! The dream!!!

Lastly, what else is in store for you all this year?!

We’re currently in the studio everyday getting a bunch of music together before our tour with COIN in October!! Writing lots and planning visuals and videos as well 🙂
Also just spending our summer in the city as a band! Doing park hangs, going to the beach, biking, eating lots of yummy take out!! Life is good right now!