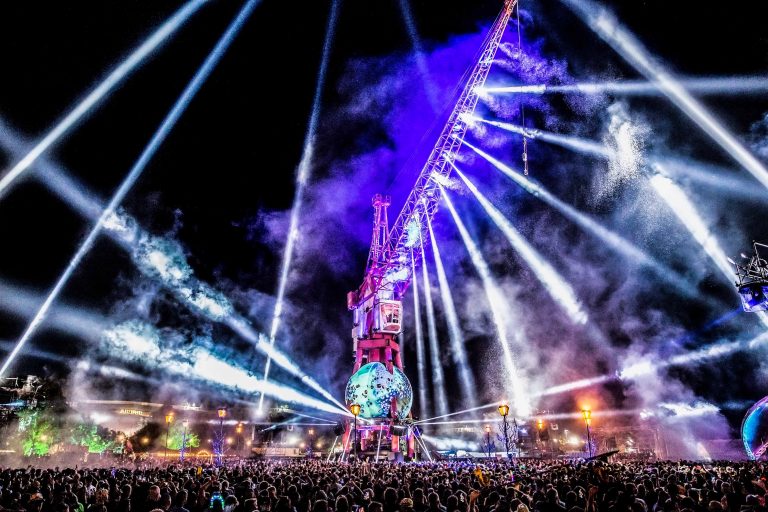 Glastonbury festival returned to Worthy Farm after what felt like the longest one-year hiatus in memory. The 200,000 revellers were blessed with a rare heatwave, long gone were the images of mud and wellies and in its place was the smell of sun cream across each stage. This year saw the likes of Stormzy, The Killers and The Cure headlining, with huge crowds for Liam Gallagher and Lewis Capaldi. The headlines will rightly go to these huge names as it does each year, however this year felt particularly special for those with a love for dance music.

This year further emphasis was placed on Electronic music, The Chemical Brothers headlined the Other stage with a live performance of all their big hits, ranging from ‘Hey Boy, Hey Girl’ to ‘Galvanize’. The performance featured crazy visuals most of which represented a different world, trippy imagery of people fighting with tennis rackets made you wonder whether this was real life. It was a moment only Glastonbury could deliver.

Jon Hopkins also headlined the West Holts stage where his live, slow building and hypnotic style transfixed a crowd that would have seen him for another hour if they could. The Prodigy, it was later revealed were supposed to have headlined the festival, however due to the incredibly sad passing of Keith Flint the legendary group pulled out. Due to this, there were many beautiful tributes to Keith across the week.

However, most of the exciting moments happened away from these main stages. Across the dance areas 2019 marked change. Arcadia waved goodbye to its infamous Spider and replaced it with their exciting new project ‘Pangea’, a disused crane turned into another worldly experience which featured crazy visuals and mind-blowing pyrotechnics.

Beat Hotel waved an emotional goodbye to Glastonbury, it’s spiritual home since 2011, to venture on their own personal project. In March they launched the first edition of their solo festival in Marrakech, it was a huge success and it will be interesting to see how they move forward from now.

One of the biggest changes of this year’s festival was the extension of Block9. The hugely popular area to keep the party going after hours opened a new field which housed its latest project the IICON stage. Monumental in its size, the stage depicted a human head where a screen replaced the face, described by the designers as a “pseudo-religious monument to the terrifying new realities emerging in our digital, data-driven, post-truth age”. IICON could hold an extra 15,000 people and freed up vital dancing space at other stages across Block9 which improved the general atmosphere.

The festival started on the Wednesday, however with many areas closed across the festival site, it was a day of exploring and attempting to gain your bearings of the 900 acres of land you’d be covering over the next 5 days.

The highlights started on the Thursday night where girl power dominated the Stonebridge Bar. Shanti Celeste, Moxie, Peach and Saoirse, fresh from playing Berghain just a few days earlier laid down the foundations of what would be expected at Glastonbury. Across the space of three hours the quartet played back to back and delivered pure, relentless energy. Saoirse upped the pace with each song she played however it was the smooth and effortless style in which Shanti mixes that really stood out. Later that night closing out Beat Hotel was Job Jobse, playing to a ludicrously busy tent where no one could get in or out, his infectious personality combined with his impeccable taste in music had the whole crowd dancing along with him, ending on ‘Insomnia’ by Faithless was a standout moment.

Friday saw Midland open the LGBTQ club NYC Downlow, the area was the only queer space at the festival. Midland has always been a very outspoken, leading voice in the LGBTQ dance scene, was the perfect person to play at the venue. Playing topless alongside drag queens and men in leather chaps he represented the anything goes attitude once your inside, people queued for up to three hours a day to get into NYC to experience what really is a truly unique safe space.

Later that night The Black Madonna opened Arcadia’s Pangea to a mass crowd whom of which no one really knew what to expect. During the day it was simply a dockland’s crane that you manoeuvred around but at night it became an existential realm surrounded by fire. With the Black Madonna at the helm it was always going to be a wild ride, a rendition of Adelphi Music Factory’s latest hammering hit ‘Feel right now’ summed up the set.

Having closed the Wow stage in Silver Hayes the previous night, Four Tet opened proceedings on Saturday at Stonebridge. The veteran DJ understood that the majority of those in the audience were barely awake and clearly hungover, hence the first hour consisted of melodic far eastern selections. The pace slowly increased to dance territory playing several of his own productions before ending on ‘Bibbidi-Bobbodi-Boo’, yes, the famous Cinderella song, bizarrely brilliant. Four Tet later that night opened Arcadia playing a set that juxtaposed his earlier one entirely. Full out from the onset it was an hour of storming selections. Arcadia had this impact on DJs that played the stage throughout the weekend, the production and the hour time limit made the artists give everything throughout, there was no space for boring songs in those 60 minutes.

Artwork blessed the Sonic stage on Saturday evening playing a range of joyous disco and even had a young child from the crowd dancing on stage. The DJ had also created some hilarious visuals of Theresa May dancing on the screens. Denis Sulta, the fast-rising Scottish DJ took over for the final set before the headliners took to the stages across the festival. Playing a very fast paced set featuring the infamous broomstick song; Masters at work – ‘work’. Sulta was at points a little too heavy on the bass which was the only downside to what would have been a great set.

The final highlight of the Saturday night was HAAi’s peak time 2am slot at Genosys. The stage sat at the heart of Block9 and was a gigantic post-apocalyptic building that also represented an ecosystem that housed plants. This was the second out of three sets the young Australian DJ played across the weekend and it was one of the best sets of the festival. Vicious from start to finish HAAi delivered hard techno that shook the floor to thousands of revellers, a song she made for this set called ‘6666’ ripped through the Soundsystem beautifully. It was a set that stood out and wasn’t matched by any other.

Sunday played host to Beat Hotel’s closing party, loved for its unique stage design and its anything goes attitude, the stage would be waving goodbye to Glastonbury in search of solo success, it could be genius, or it could be a huge risk, only time will tell. Moscoman laid down the pace for the night, the Israeli DJ played a set full of Middle Eastern inspiration and offered us something completely unique. DJ Tennis followed before Daniel Avery and HAAi closed out the stage with a two hour back to back set. Two DJs who are both rising to the top of the Techno scene right now did the honour complete justice and many people will remember that moment for years to come. Beat Hotel leaves a huge gap that Glastonbury will now need to fill, no one is quite sure how just yet but I’m sure we will see next year.

Over at Block9 legendary Techno DJ Josh Wink destroyed the Genosys stage and Freakenstein closed out IICON to bring a close an incredibly successful week for the south east corner.

This year’s Glastonbury shone like no other, the line up delivered something for everyone. For those that love dance music it was a year that marked a real change in direction, Glastonbury has always had a dance world, but this year was the first time it’s been truly celebrated and pushed forward to new unknown territory. All the changes from Arcadia’s Pangea to Block9 have been an astounding success, IICON hit headlines across the internet for its insane visuals. Not a bad word could be said about electronic music over the course of the week, it was euphoric and we can only hope Glastonbury continues to celebrate dance music in the same manner in the years ahead.