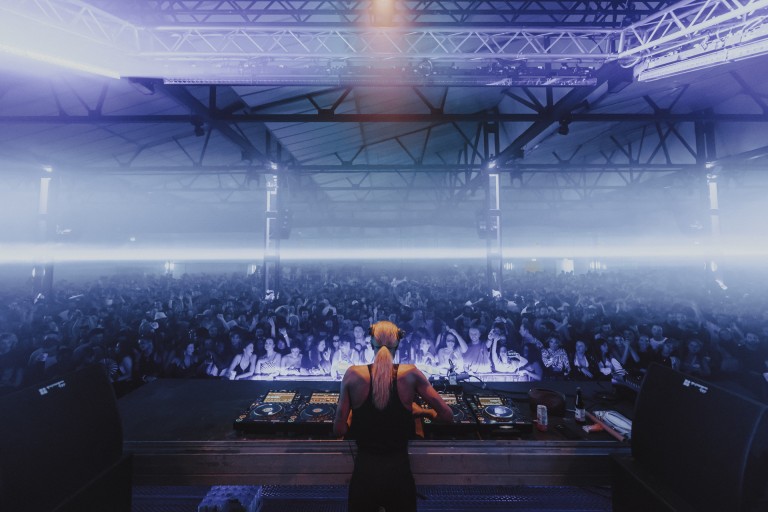 Soaking up the solid groovy atmosphere, Noctis Magazine revelled it up at the new Beams venue in East London. Chicago house goddess Honey Dijon brought her Radiance event to town and headlined the night whilst Dan Shake and the PXSSY PALACE team played some smashing sets.

If you don’t already know, the Beams is a brand new, large, multipurpose space in the heart of London’s Royal Docks that serves as a testing ground for culture in all its manifestations. From the creators of Printworks, this new venue is the next London hotspot for you music enthusiasts.

It was the perfect raw, industrial and secluded space for Honey Dijon and her friends to spin some shiny records whilst they ramped the crowd up. The venue reflects a typical Berlin-like industrial background and is characterised by a mix of attractive architectural characteristics as well as vast, clean, and efficient areas that allow for a wide range of creative expressions.

Upon entrance to the venue, Noctis discovered the high-intensity of music fanatics, who were pumped and raring to dance their way through the day. The second room was filled with smoke and sexiness as the PXSSY PALACE team took over the space, giving sensational sets from Lexii, My Mehmi, and Nadine Noor. This room was packed with LGBTQ+ pals, it screamed safety, and inclusivity which was the ideal environment for the pumping party people.

As we entered the main area, we saw the queen herself, Honey Dijon take to the stage at around 9 pm. She demonstrated her bold, varied, and unapologetic DJ character – as she mixed up some music experiments, fusing house flavours with other sub-genres of disco and more.

Honey was accompanied by Dan Shake, whose love of groove inspires his shows, which range from sparkly acid to Brazilian samba, itchy funk to heavyweight house. Coincidently that day, he turned 30 and right at the end of his set Honey presents him a bucket hat birthday cake, dedicated to his signature rave-wear style.

Mr G Live, Natasha Diggs, and Eliza Rose, a fast-rising artist who just blew up after releasing “B.O.T.A” – a single that has rocked the country and that has been nominated as a Brit candidate – performed as support acts on that day.

Straight after the event Honey took to Instagram to share a video from the evening and said “I have no words! Thank you from the bottom of my heart! I had the most incredible time playing for you and it was a magical evening. Thank you to all the other artists that joined me for the ride and to the staff at Beams! I am overwhelmed with love!”

Noctis can’t wait until she crosses the pond again to share her musical blessings. Ps. some advice from the raving Noctis team, Beams is a venue you must add to your rave bucket list.