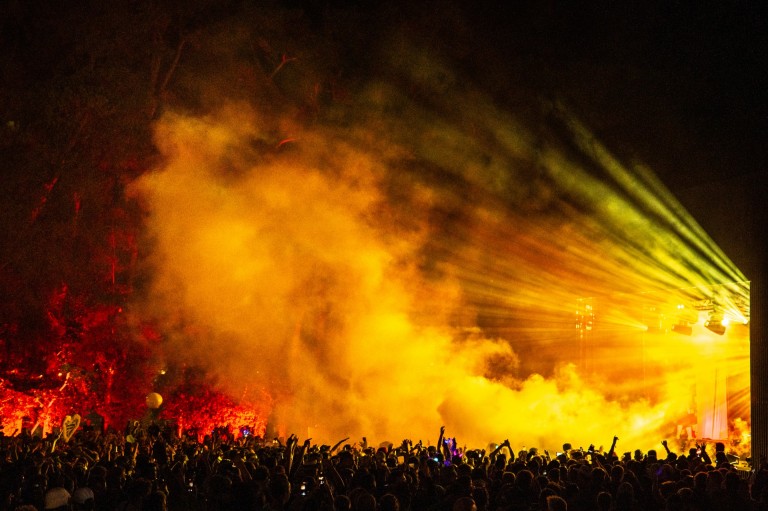 After four long awaited years, Houghton festival returned for its third edition, with a determination to make up for lost time. Curated by Craig Richards and Bobby, this year felt incredibly special, after 2019’s edition was cancelled due to high winds, and then the consequences of the pandemic laid waste to both 2020 and 2021’s edition. So, here we were, celebrating year 3 in what turned out to be year 6, a line I’m sure no member of the team imagined saying in its inaugural summer. But such a fight against the elements is now a key factor to the wonder of Houghton. Through sheer determination and passion for their craft, they delivered a weekend of pristine dance music and a genuine highlight of the summer.

From the moment you stepped foot onto the festival site it was instantly apparent that numerous creative fields would merge to make for an all-encompassing event. With eye-catching sculptures meticulously placed, particularly in the forest, when at night, light instalments added unique focal points that crowds flocked towards. A particular highlight came from Antonia Beard who created a stunning circular sculpture made entirely from the wristbands of 2019’s cancelled edition. It was a symbol of what could have been, whilst accepting that such a wait made for an experience that was even better.

Houghton festival has always stood out thanks to its 24-hour music license, a feat unmatched by almost everyone in the festival calendar. I wondered just how they managed to secure such a license, to which Bobby simply replied, “We just asked for it”, and the rest was history. Including an afternoon and evening of music on Thursday, DJ’s and live artists then played from 11am Friday until 3am Monday, in what was an incredible marathon free musical will. With artists playing for a minimum for 3 hours, they had the power to take the crowd in whatever direction they felt, and such freedom made for some special moments and an intimate connection between artists and dancers.

Although, such a long stretch of music added a whole new element of planning to the weekend. Aided by a heatwave of 35 degrees and the accompanying announcement of drought in East Anglia, it was important to know when to rest, especially when your tent is an oven before 9am. Such weather conditions saw the forest layered in a sea of dust, with many making bandanas to cover their nose and mouth. Despite this, nothing could quite detract from the magic that ensued.

Such magic was enhanced by an array of uniquely designed stages dotted in and around the forest. This year featured two new stages, the first being Pinters, which was crafted as a live jazz area that also played host to an array of ambient sets. Situated next to the wellness area, it was the only stage that featured an area to sit down and absorb the music in a different manner. Whilst outburst played host to a more alternative, left-field programme, which saw the likes of Roman Flugel, Dresden, Vladimir Ivkovic and Lena Wilikens offer a psychedelic infused take on electronic music that was always hard to step away from.

Then there was Tantrum, a space in which industrial music played host across the weekend. Created with cargo containers, the stage came to life at night with its stunning visuals that featured lasers from every direction. DJ Stingray delivered two hours of dark electro with distinctive rave undertones that certainly had a nostalgic element to it. However, Helena Hauff certainly stole the show in the early hours of Sunday morning with an impeccable vinyl set that traversed breakbeat, EBM and techno. Never putting a foot wrong, the German DJ blew the crowd away, and sadly two hours didn’t seem long enough.

Tucked away at the far end of the forest was Earthling, a 360-degree stage with no thrills attached – stripped back on everything except the sound, it played host to some free-thinking musical expression. Sets from Craig Richards, DJ Masda, Powder and Saoirse all stood out, each taking a meandering journey across off-kilter dance music, with glitchy techno and lofi house dominating proceedings.

Special mentions should also go to the Warehouse stage, a huge indoor space that saw a retro designed backdrop of box televisions that had transformed into a collective piece of moving imagery. Whilst Terminus – the much-hyped secret stage that kept music pumping all weekend long without stopping – drew in a fantastic crowd who revelled in the fact they knew something many others didn’t. Although its stage design felt very similar to Quarry, a large stage that was someway below the rest of the festival sight. Sadly, Terminus didn’t make use of the space in the same way as Quarry, which excelled in the visuals which created a layer of atmospheric clouds at points above the dancers.

Away from the music, Houghton put on a spectacular wellness programme that featured yoga and sound baths which were included in the standard festival price. It reinforced the curators aims for the event to be an experience for everyone and therefore no-one attending was priced out of anything. The festival also featured a pop-up record shop called Trevinos which doubled down as a listening station during the day and all-out party central at night. The option was also open for everyone to attend art tours at the grounds of Houghton Hall, where an array of beautiful sculpture’s – commissioned by Lord Cholmondeley – were shown and their stories were shared by experienced guides.

Houghton festival is undoubtedly a special event that does all the core factors perfectly. From the freedom it treats those that attend, to the impeccable sound system, that never dipped at any time, you could just tell it was run by people that loved dance music. The line-up didn’t feature the stereotypical ticket-selling big names that we’ve come to expect, instead prioritising trusted talent and in so doing they found a crowd that bought into those ideas. After four years, expectations were high, but Houghton festival certainly didn’t disappoint and 2022’s edition serves as the perfect building block for an even bigger and better edition next year.