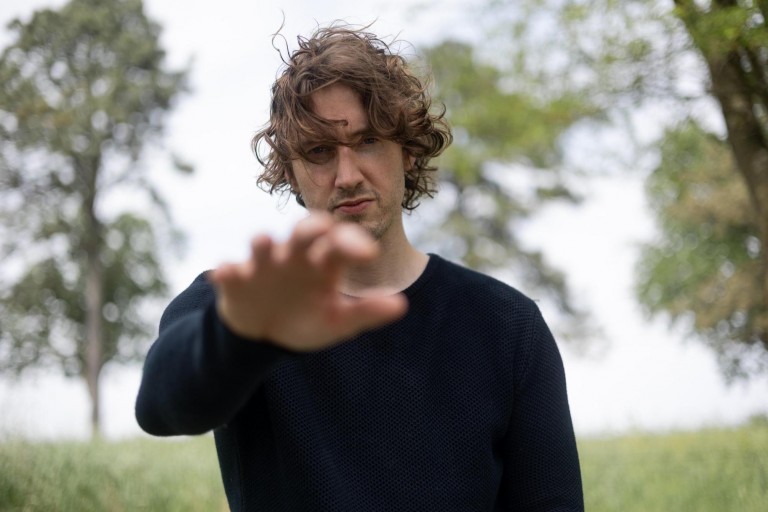 In Conversation With Dean Lewis

Australian singer/songwriter Dean Lewis transforms somber concerns of our daily reality into arena-filling global mega-hits, such as the most recent tear-jerking ‘How To Say Goodbye,’ released on his new sophomore studio album ‘The Hardest Love.’

His emotionally rich vocal harmonies fill the void of existential loneliness. With every played guitar string and piano key, the sound resembles the ache of a broken heart and hopeless longing.

‘The Hardest Love’ is a further elevation of his double platinum-selling debut album ‘A Place We Knew,’ which saw Lewis at the top of the charts with hits ‘Waves’ and ‘Be Alright.’

In anticipation of ‘The Hardest Love’ unveiling, Dean Lewis traveled across Europe for a sold-out tour with several pinch-me moments, including an audience of four thousand people in Cologne singing along to every lyric of ‘How Do I Say Goodbye.’

‘The Hardest Love’ is a heartfelt, authentic, cinematic soundtrack of the ambiance of the good, the bad, and the ugly of being in love. The unbelievably talented Dean Lewis chats to Noctis about the record, hailing from Andes Hotel in West Hollywood, as he battles with a slight jet lag.

You just wrapped your European tour and are about to do shows in New Zealand and Australia. How was your Europe tour? Could you share any special moments?

Europe was amazing, the entire thing was sold out which was insane because I didn’t know if that was gonna be a possibility. But it was just incredible, my favourite moment was probably playing to witness. The shows are just getting a lot bigger, I did two small arenas out in Copenhagen and just hearing everyone sing back How Do I say Goodbye? Was one of the most surreal moments of my life.

How does an Australian audience compare to European countries?

The audiences are always the same in the way that they’re always incredible and always really excited to be there. My fans don’t really move once they get a spot, like they move but they don’t wanna leave to go to the bar. They just like sing all the songs, I don’t really notice a difference, they’re always screaming and so happy.

As an Aussie, how was your childhood, what did you take away from the local music you were listening to back then?

I never really listen to Australian music that much, maybe a little bit of Silverchair when I was young, but I was more of a fan of UK music when I was growing up. This is what my Dad listened to, and also American music, so I was a big fan of Bruce Springsteen and Oasis from the UK as well.

Were you always into music? Was it something you dreamt of doing professionally?

I think I always grew up around music so I was always listening to it, but I was around 17/18 when I got into guitar and do it properly, my dad had always tried to teach me guitar when I was 12 but I wasn’t interested. And it took me a while to take it seriously, but I just loved it, I was so passionate about it, I used to watch every video on Youtube. Like Oasis and The Kooks, find every performance and just watch it over and over – I was just obsessed with it, so I started taking it more seriously as these went on.”

When did you start writing songs and why do you think you’re able to be so vulnerable?

I started writing songs because I think I’m bad at a lot of things, but I’m good at writing songs, I don’t know why just something that came a little bit more easily. And then just over time I just got more and more obsessed with it.

Could you share the backstory of your hits ‘Waves’ and ‘Be Alright’?

Waves was one of the first songs I wrote, it was the first song I ever released and about the excitement of youth fading, I felt like every year I became a bit more numb to things like what was gonna happen the next day, like, today was feeling really mundane, so I wrote about how do I get that feeling back again. And I’m feeling this time slip through my fingers. And then when I wrote Be Alright about a relationship, I saw a message on my ex-girlfriend’s phone, and it was awful and I basically went to my brother’s house and my brother said ‘have a drink, put your phone away’ so I just put that in the song”

Was it therapeutic putting ‘How Do I Say Goodbye’ together?

It was a song I had to write, I always write about things that are happening in my life and important things to me, and my dad is probably one of the closest people to me. I don’t know about therapeutic, it was very emotional, I probably cried 15 times writing it, but I’m so glad that I made it. I think it’s the best song I’ve done.

What was your family’s reaction to it?

My dad got emotional when he heard it, said that he’s never gonna listen to it again, but, he loves it. He’s loving all the attention right now, Mum loves it too. They’re looking at the Youtube comments every day, just loving it right now, because a lot of people don’t know that he’s actually, the doctors said he had a 25% chance of lasting the year but they got a stem cell transplant that actually worked and saved his life.”

We’re not far from the release of your new album ‘The Hardest Love,’ what is love for you? How would you define it?

Love is just, when you care about someone and you put them before you. I think that’s probably how I’d describe it the best, and I’m really excited to put the album out. I called it ‘The Hardest Love’ because I felt like I wrote a song called The Hardest Love,  because I thought the title was sort of reflective of what I’ve been through. I’d written a bunch of songs about this one girl that I thought I was gonna end up with and I thought that was the last sort of love that I was gonna find. Writing that song about my dad was a very difficult thing to do, it was a song about love as well – for my dad. And yeah, that’s why I called it that.

What do you have planned to celebrate the release?

I have nothing planned. I think there’s so much to do right now. How To Say Goodbye is blowing up, so I’m just gonna be thinking about what to post about that. I don’t really celebrate things, I’m already thinking about the next thing I need to do when I get there. Which is kind of a sad way to live but it’s exciting because I never get to take it in but, I can’t do it any other way, it’s the way my brain works. Done, next, done, next.”

How would you describe the new record?

I’d describe the new record as some of the best songs i’ve written, I think I’ve zoomed in on the things that I liked about the first album. Say you have your whole life to write your first album and then only a couple of months to write your second album but this was the reverse because lockdown meant I had so much time to write so many songs for this one. The best of my first one I felt like I expanded on and zoomed in on more.

What was important for you to express in the span of 10 tracks?

I’m just writing about things that are happening in my life that are really important. So, love, relationships, some life lessons, songs about my dad – whatever I’m going through that’s what I write about.

You got to perform alongside Kygo at some of the biggest festivals in the world, how is that experience different to your own show? What did you enjoy the most about it?

It’s very different, it kind of feels like you’re in a band. A bit of a show, like if I’m going up I sing for about an hour and a half and it was like, I went out there and did two songs and it was really fun, there wasn’t as much pressure on me, although there’s a whole new skill set because I’m used to having a guitar or piano and I never know what to do with my hands. But I learnt a lot, how to control the stage a lot more, which was really cool – it was just a different experience.

Do you have anything special planned before the end of the year?

The only thing I’m doing for the rest of this year is bringing out my album and I’m gonna keep writing songs. I’ve been writing so many songs and not stopping.