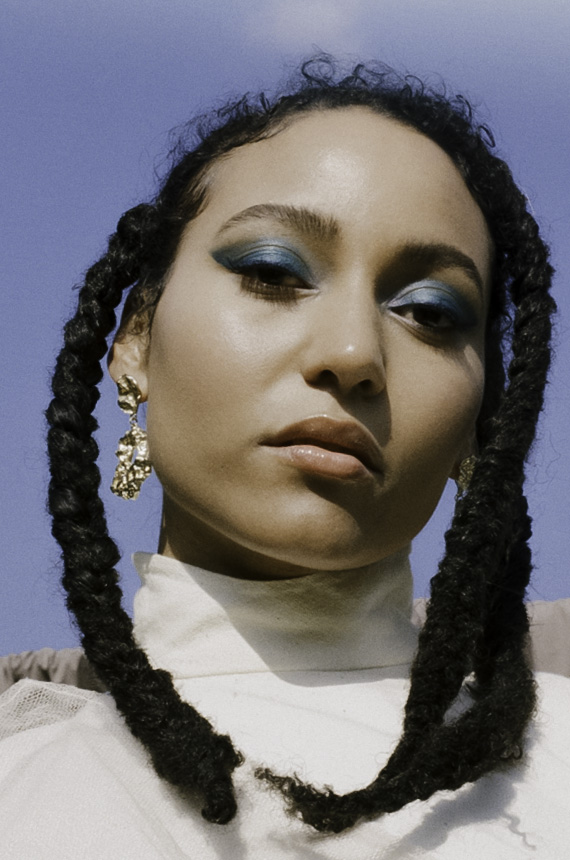 In Conversation with Kyra

Kyra recently released cover and song Closer Than Close which introduces us to her universe before releasing her Debut EP this year. I had the opportunity to sit down with her to talk more about her vision, Xanadu, her upcoming EP and her experience as a black woman and mother.

It’s been an organic journey. I always had a love for music before doing anything. I realised it was something I could do. I was singing everywhere, even at school people be like “Oh Kyra is in the toilet singing”. I was quite fortunate to grow up in such a musical household. My father’s record collection is massive. He plays the bass. He plays a lot of soul, classic jazz, funk. That shaped my musical journey, I had a good taste for food. It influenced my musical taste over the years.

Did you have any singing lessons ?

I was raised in a Christian family. They’ve always been supportive of my music but they never pushed me into it. I am self-taught. I was on my own journey. I learned to sing by mimicking Randy Crawford, Faith Heavens, Destiny’s Child. No classic training at all.

When did you start producing ?

When is your EP going to be released ?

My EP will be released in Summer or Autumn. It is a 6 tracks EP and we’re going to bring out two more singles with visuals first. The way I want people to digest it is with a song at a time. I want them to buy into the story and the concept behind the EP. 6 tracks on a go is too much right now. We do not have a set date yet but it’s going to be a lot of music on the way.

You recently released the cover and single Closer than Close. Why did you chose that song ?

When I recorded it, the EP was actually being written. I was in the studio with The Gardan (?) and we were just listening to old house and garage daft. I thought it was a banging song and I wanted to sing it. I was literally just wanted to put it on Spotify. I thought it was a good way for people to starting to know me with that cover. We recorded it very quickly and it made sense to start the story with Closer Than Close.

What is your mindset regarding your EP ?

The EP is quite a layered body of work. It is a concept EP based around the movie Xanadu that I was obsessed with. It is about a muse that comes out of a painting inspires an artist. She is supposed to go back to the painting to inspire someone else but she falls in love with him. The movie itself is borrowed from the Greek mythology, she is one of the 9 sisters and her father Zeus is totally against this relationship.
I had that life experience with my family that do not like my partner. But then also Zeus, to me, is quite metaphorical for god. And so there is like religious connotation in there. Being brought up in a religious household. One of the songs is called Falling From Grace and it feels like you’re displeasing your family and god when you want to take another path.
When you listen the EP at first you won’t exactly get that right away but the more you dive into it the more you will see different layers. Even with this all idea of muses, there is a lot of female empowerment and to me women do that on a daily basis.
There’s another record on the EP called Higher Ground which is a self-discovery record. Sometimes we get caught up in phones, society and you want to escape this, get to a higher ground.
Sometimes London can make you feel so pressured and social media can almost close you in. The minute you put your phone down you can reengage to nature, open up yourself. There’s another track on the EP called Cali Dreaming. This track was directly inspired by my trip to LA and I was on this road trip with my friends. We were driving down the Big Sur, hands blowing in the wind, wind blowing in your hair. Literally just a feel good record when you can close your eyes, float back, you’re in your Xanadu, your magical place where you can escape.

There’s different layers in this record and it is all connected back to Xanadu. The detail is there, if you’re not bothered about it you can listen to the tracks and enjoy it. But that was important to me to make sure that all the details were there.

How did your past and present empower you as a woman ?

There’s definitely a point in your life when you have to decide what you want and that’s not always going to sit right with family and friends. It is a brave move but you need to be assertive and establish what you want. Ultimately you can’t live for other people. You need to make a stand for what you believe in, that stands in life ; career, family, relationships…
The record is a bit of a coming of age and equally people that might have seen me in a life circle I can say that the body of work is much more sensual. That’s me coming of age as well and I am exploring that side of me.

In the music video Closer Than Close, you’re dancing. Do you usually dance as well ?

I am not a trained dancer or not a trainer singer. I wanted to explore movements a bit more. We’re going to be doing a more of that in the next visuals. The rehearsals were quite fun. John, the other dancer, was really lovely.

What is important to you nowadays, in society, arts, music, politics ?

I think we are at a time now where you can no longer separate art from the artist. People need to be authentic and stand for something. This is the kind of artists what I follow. I am quite outspoken about female empowerment. I am not anti-men but pro-women. I definitely supportive of black creatives, businesses. I think we still have a long way to go.
Also I am a mom, my son is a year and a half. It’s been a challenge and I have definitely seen how society is building a way that is not fair. We do not support working women at all. I have got a point to prove, fire in my belly. It isn’t the fact that I have to show you I am a mom all the time, whereas the fact you can see that I am doing this whilst being a mom.

How do you want to express that fire ?

I think being visible is already ticking so many boxes. The thing I have at the moment is that there are so many podcasts. I recently were asked to talk for a podcast called The Flower’s Bloom ; it was all about how wanting to achieve goals can stop you from social accomplishments and developments. People want to have conversations not only see a pretty Instagram.

I guess it is just about speaking up, using your social platform to say the things that matter to you. Becoming a mom has definitely reignite my passion. It made me certain of what I want. Almost like tunnel vision now.

What do you think of the current political climate in the UK and in the world ?

It is quite a scary time. Sometimes I find it overwhelming. I am quite sensitive and sometimes you can find it so overwhelming that it makes you wonder if you can make any difference. I am trying to only focus on my circle, if I can influence or have an impact on 20 or 5 people around me they will have an impact that’s enough. We can have an impact on small communities.

I feel as a black woman, especially where I am entering spaces where there aren’t any black people there, I am an ambassador. It’s my job now to educate you when you’re saying stereotypical jokes about black people, I will question them.
I think people should be challenged. Even your closest friends. It is really interesting to see how many people do not understand or do not realise the power of their jokes or things they say. I think you have to be very careful with what you digest in the media, black men, black women and black families are represented in such an awful way that is not representative that black people. That’s what the nation is being fed, an awful propaganda.

You mentioned educating them. Do you think it is black or mixed-race people responsibility to educate other people ? Or should they educate themselves ?

They should educate themselves but if they live in ignorance they need to be shown the way. If I see that they are on the wrong path I will say it. In order for that to have an actual change, people that aren’t affected need to understand that it’s not because they aren’t the victim of racism or hate crime, why wouldn’t that still not concern you than that happens ? I guess when you are walking around with a sort of a white privilege and not experiencing any of these things then I imagine it is easy to do not connect with those things. You should be very worried that black people were sold as slaves and so on whatever your color or race.

How would you like your music identity to be in the future ? Do you see yourself evolve ?

I feel like getting this project out there has been a journey, a labor of love. It’s sort of a weight off my shoulder once it will be released and I will use this opportunity to talk about motherhood, being a black female, being female.
I am excited to get back into the studio. I would like my songs in the future to be more autobiographical, reflect my day to day life.

What is going to be the future in music, arts, etc in the UK ?

Our industry in the music is really transitioning. Independent artists are doing so much for themselves. Record labels are becoming less and less important. I think the possibilities are endless.
I feel for myself that, being completely independent, self-managed, working with Public Ambition ; I think building a team and finding people along the way is the most important. Platforms such as Spotify can show you how you can reach people not only in your country. Music is being listened to worldwide so it is good to take advantage of it, with the right audiences that feel my music.

I would love to tour Europe because I was actually fortunate enough to have a support slot with Kwabs in 2015. The response to his music in Amsterdam and Gent was amazing. The audience was wonderful. It was such an amazing experience, my music was demo at the time and it gave me the opportunity to try my music on the audience to see how they would respond to it.

I would love to play at Coachella, Afropunk, Glastonbury, some of their jazz festivals also in the UK and possibly in France.