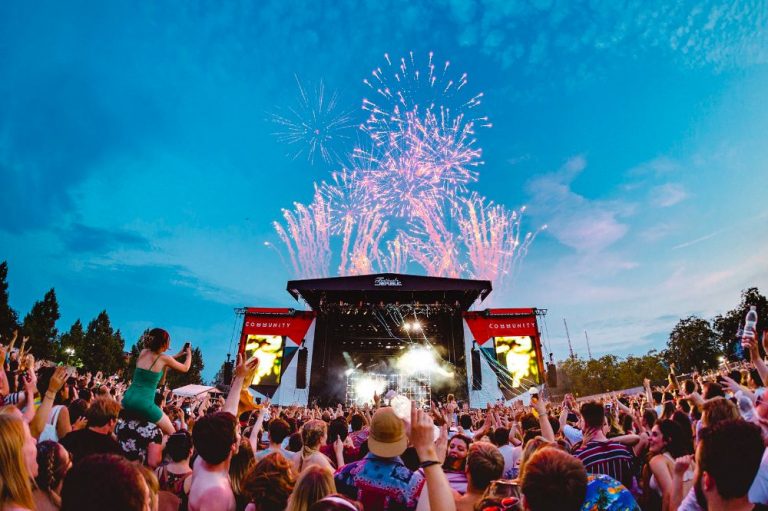 Just before the beginning of July even Londoners lived to see the summer weather we’ve been praying for.  After Saturday’s tropical temperatures, we cooled down in the heart of North London, in Finsbury Park with Community Festival. Being it their third run at the festival, it was the most successful one yet. With this year’s experience, it is fair to say Community offers the best of indie music, both new and established artists.

Just as we arrived at the grounds of Finsbury Park we catch a glimpse of the crowd in front of the main stage singing along with the English singer/songwriter Kate Nash. It wasn’t just an ordinary grouping of fans. You could not see an empty place. We sit down in the shade and just as we get settled, Kate Nash is saying goodbye with one song left for her to perform. It was ‘Foundations’ of course. With the first few notes, you can see people running and getting closer to the stage. ‘Foundations’ felt like it brought everyone closer together, as everyone sang along the lyrics with Nash and had the biggest smile on their faces.

The next one on our show agenda is The Academic set to perform at the N4 stage. Keeping in mind that we are not very familiar with this indie-rock band from Ireland, we were eager to see them in full glory after enjoying their songs in the Spotify playlist Community put together for the festival.

Securing a spot in the shade, leaning against a tree we are ready for The Academic. Waiting patiently with an open mind, with the first song, we knew we were instant fans. ‘Mixtape 2003’ from 2016 was 100% the correct choice to open the show with as it had everyone hooked right away.

The Academic then continue to play songs from their 2018 record ‘Tales From The Backseat’ sounding like a band that will soon headline festivals. The crowd was vibing to ‘Bite My Tongue,’ ‘Why Can’t We Be Friends,’ ‘Bear Claw’s, ‘Different.’

After a fantastic performance at the N4 stage, we decide to explore the festival. First, I would like to highlight Community’s efforts to be a plastic-free festival and looking at the state of things; it was hard to spot any plastic laying around. When receiving tickets, all attendees were encouraged to bring their reusable bottles as the festival site offered free water stations. All other beverages were in paper cups — props to you guys fighting for our planet.

Now it is time for Stockport indie-pop band Blossoms. The delivery of their massive hit ‘Charlemagne’ had the entire festival singing along.

The moment the whole festival of 35,000 people has been waiting for is the headliner The Kooks. Brighton’s very own, The Kooks come in fully loaded with numerous hits, old and new.

Right off the bat, we were singing our hearts out to the Kooks from 2006 with ‘She Moves In Her Own Way’ and ‘Ooh La.’ Then they move to one of my personal favorites’ Westside’ from their 2014 record ‘Listen’ that had us all wanting to settle down and start a family.

Luke Pritchard, the lead vocalist of the Kooks, moves to a piano and performs the emotional ode to his dad ‘See Me Now.’ After seeing a softer side, the band comes back with ‘Forgive and Forget,’ ‘Pamela,’ ‘Around Town,’ ‘Bad Habit,’ ‘Do You Wanna.’

They continue the set with ‘Seaside’ which was one of the audience’s favorites, followed by ‘Junk Of The Heart (Happy).’ For the encore, the Kooks perform ‘No Pressure’ that was adequate for the situation given all of us were having a good time. The last song that saw everyone pick their phones out and warm their vocal cords is ‘Naive.’

Community Festival had their most successful year; I vouch for that. The post-festival organization took its course flawlessly. Everyone was still buzzing from one of the best performances of my life by the Kooks. I am confident to call Community Festival the go-to festival for indie music and for the newcomers like the Academic.

Community Festival, we will see you next year!