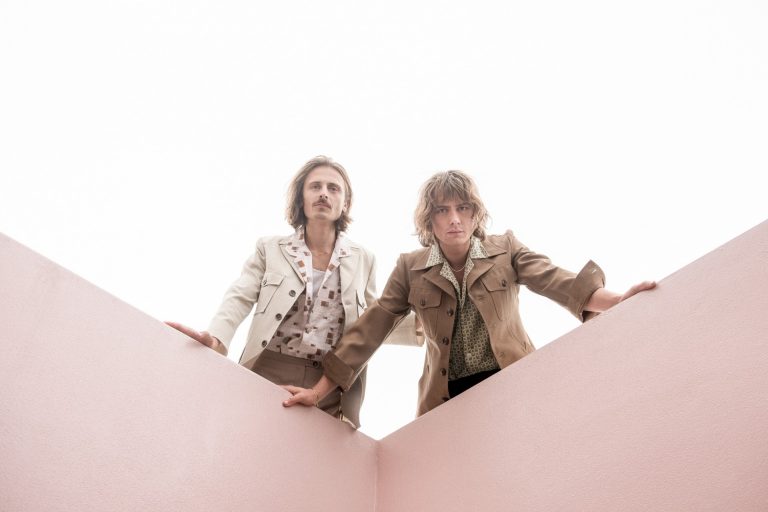 In Conversation With Lime Cordiale

It’s been a whirlwind for Australia’s very own Lime Cordiale. In one week, the duo announced the fourth cancellation of their show due to the word that shall not be named; they shared new Europe tour dates shortly after. A few days later, they celebrated the release of their mini-album featuring British actor, rapper, and DJ, Idris Elba – ‘Cordi Elba.’

Oli and Louis Leimbach from Lime Cordiale agree to have a sit-down chat amidst it all. It is 8:30 pm (Australian time) on a Friday evening and the release day of ‘Cordi Elba,’ and the boys crack open their beers as I drink my morning coffee. The eleven-hour difference with London is an easy ice breaker right off the bat.

Right away, their Australian-heartwarming charm creates a friendly catch-up atmosphere. Respecting the magnitude of the band’s homeland success, it happens more than often when you stumble upon a Lime Cordiale song playing in a classic London pub.

Along with the new rescheduled Europe dates, Oli took to Instagram and revealed their semi-permanent move over to Europe. They admit they might be making up for a lost time, but it has always been the plan: “When we did our tour over there in 2019, it felt like there was this energy in the room that felt like it would grow. The next show would double in size. So instead of popping over for a couple of weeks, once a year, as it’s the other side of the world, we just decided to concentrate on it. Then we’ll whiz over to different parts of Europe. It feels like where we want to be based”, Oli says.

Oli and Louis were looking for someone outside of Australia to collaborate with throughout last year. They nailed the Lime Cordiale signature sound and were open to experimenting by this point. Coincidentally, the “Boasty” rapper and actor Idris Elba was in Sydney to film “Three Thousand Years of Longing” alongside George Miller and Tilda Swinton. Luckily enough, it was in the period when Sydney was out of lockdown, open and free.

It turned out Idris Elba heard one of Lime Cordiale’s songs and was eager to jump on a track. One session organically grew into making “Cordi Elba.” This 6-track mini-album finds both parties learning from the other one. Oli explains: “It’s interesting, the way he writes is a big paragraph. You don’t quite know how the rhythm works. Then he gets on the mic and does it. We would just read along and listen and then change. But with ‘Holy Moley’, it’s pretty out there. We had no idea what some of those things really meant, but we just went with it. I don’t even want to know; it’s nice wondering”.

He adds: “Each of the songs is quite different from each other. There’s a song, ‘Holiday,’ which is a bit of an ode to Idris’ DJ world and is something that he can put on in Ibiza. Then we’ve got ‘Holy Moley,’ which is so far removed from a Lime Cordiale track. It’s cool being able to release music that’s so different from what people would expect from us. It’s a little bit scary being like, ‘here is a pretty hip-hop feeling track,’ but people have been accepting it”.

Looking back, they express their gratitude to their classical music roots. Their mom being a cello player and a violinist, they were both started on classical instruments. However, their desire to write songs and passion for other rock bands made them branch out: “It’s weird because our main instruments would be trumpet and clarinet. That’s what we practiced every day and got good at. It was never really guitar and bass. Those things we got good at just by having to do it”.

“We had no idea what we’re doing,” laughs Oli, as he tells the story of how Lime Cordiale was formed. It was the year 2009, and things were slightly different. “We were messing around, playing some stupid chins, had no idea of the business of music, and just started playing in cafes and bars.” The lack of technological advances like the social media platforms enabled bands like Lime Cordiale to have a slower start, ensuring their current rising popularity.

Without TikTok, Instagram, or Spotify, Oli and Louis found their own way to spread the word: “We were innovative at the time because we put our music on a USB stick that said Lime Cordiale on it. We would sell those. There was only one song and a music video on it. It was just 120 megabytes”. Louis adds: “I think it was good for us, though, that it was such a long road because we had no idea what we were doing. It took us a long time to figure it out. I feel like if we did blow up or whatever on like the equivalent of Instagram or TikTok, it would just crumble with some shit songs”.

Fast forward to the present day, Lime Cordiale’s songwriting is in full swing taking advantage of smartphones: “Great thing about phones, obviously voice memos, being able to record little snippets for songwriting and then notes having that as like a public document. So everything you put in there, the both of you can see, and there’s no privacy, there is no holding back. So everything’s out on the table. That’s a great tool”.

On top of being one-half of Lime Cordiale, Louis is also a very talented visual artist and a graduate of the UNSW College of Fine Arts. He is responsible for all of Lime Cordiale’s trademark single, album, posters, and merchandise in practice known as lino cutting. The process requires physically cutting every line out of a piece of lino with a sharp tool, and one image can take weeks to complete. Louis shares he found his way to lino cutting after studying when he was helping around his dad with filming a documentary about a local artist: “I assisted dad in making the film, and I fell in love with that sort of artwork, and I love the naivety of it. It always has a childlike quality to it. It’s quite bold as well”, tells Louis.

The conversation then moves to their debut album ‘Permanent Vacation,’ which properly introduced Lime Cordiale to the scene. They speak on the 2017 project: “It was our first album. We’d just come out of a lot of experimentation, I reckon. We did it in parts. So we do three songs in four songs and another four songs. We weren’t experimenting so much with songwriting by that point. It felt like we just found our sound, and we were working with a producer that we still work with now, his name’s Dave Hammer. He did the Idris mini-album as well”.

Oli elaborates on the theme of ‘Permanent Vacation’: ” In terms of what we wanted to say. A lot of the songs came from maybe over three years of writing. It went over quite a big time span of struggling, living in the city as a band, not earning any money, and having separate day jobs and different relationships. It felt more personal:”.

Their 2020 record ’14 Steps To A Better You’ is a societal commentary: “Each song was like a little lesson, we were having a go at people and society, and Australia. It just felt like we were trying to make people better. And we like to tell people what to do in our own stupid way. Also, we’re happy to admit that we’re far from perfect”, Oli discloses.

’14 Step To A Better You’ won Lime Cordiale Breakthrough Act at the 2020 ARIAS and also saw them break the record for most tracks in Triple J’s Hot 100 list and have had 9 songs go Gold or Platinum.

One track that cannot be left unmentioned is the bittersweet ode ‘Dear London.’ Oli unveils the true story behind the lyrics: “I had a lover in London, and I came over there for two months or something. I came back a bit heartbroken”. Hence the beautiful lyrics, “Dear London I love you but love got in the way.”

A few weeks after our chat, Lime Cordiale’s celebrations went on as they made it to number 14 with ‘Apple Crumble and number 41 with ‘What’s Not To Like’s on the nonother than Triple J’s Hottest 100. Congratulation, Oli and Louis; London cannot wait for you this summer.