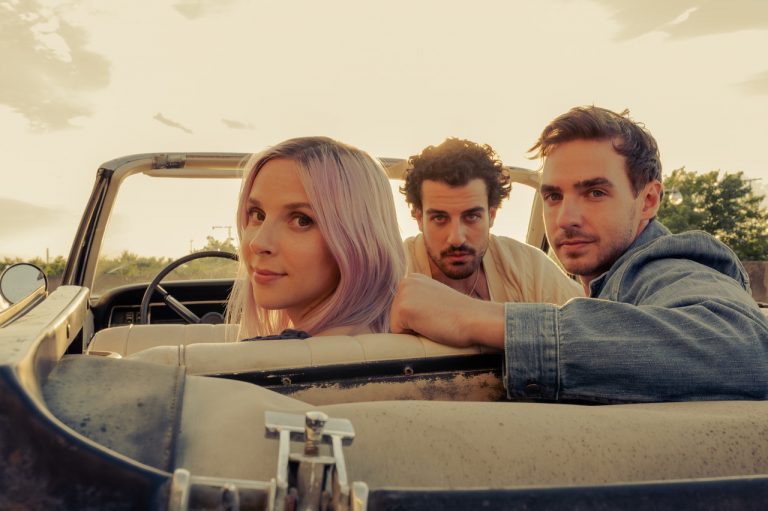 There are only four days to go until the new Wild Rivers album, ‘Sidelines,’ comes out. The indie trio comprised of Khalid, Devan, and Andrew put together an honest tale of the coming-of-age hurdles as they embrace the unknown reality of adulthood.

‘Sidelines’ offers a variety of introspective lyrics and genre-fluid melodies that depict Wild Rivers’ post-college trajectory while they accept life is full of uncertainty. Recent single ‘Bedrock‘ touches upon their time in LA, where depression took center stage despite the beautiful sunny appeal of the city.

Ever since the 2020 EP, ‘Songs To Break Up To,’ the band has been actively chasing deeper feelings that end up feeling therapeutic, according to Khalid, who shares more in our conversation.

“We’re on the road about to start our US tour. Andy’s driving, Khal’s asleep on the bench in front of me, and I’m hanging in the back”, says Devan before we began.

The river may be wild, but the swimmers are getting the hang of things and are no longer scared of more of a bumpy ride. With ‘Sidelines’ playing in their ears, the flow of Wild Rivers is more accepting and patient with the future.

What is an album that you can’t stop listening to at the moment?

D: “Absolutely” by Dijon. The first thing I’ve heard in a while that hooked me immediately when it came out, and I have yet to get sick of it.

How was Wild Rivers formed?

D: Khal and I met in college, at a place called Queens University in Ontario. We were both studying things unrelated to music and performing at open mics on the side, looking for people to collaborate with. We met through a mutual friend and immediately hit it off and started playing together. When it came time to record our first album, we were looking to fill out our sound by adding some more players. That’s where we met Andrew and our first drummer, Ben, and Wild Rivers was born!

Do you remember what the first song you’ve written together was about?

D: I think the first song we wrote together was a song on our first album called “Undercover”. It was about feeling lost, and a loss of innocence. I definitely cringe a little when I listen now, but it holds a sentimental place for me. I remember sitting on Khal’s bed eating Pad Thai while we wrote it.

How would you compare your 2016 self-titled album with the music you’re about to release?

D: We’ve had so many experiences since making our first album, we had never played live shows or been in a studio before when we made it. Being able to play live and find our rhythm as a band in that setting over the past 5 years has definitely informed some of what we do in the studio. We’re also much more comfortable navigating a recording setting, and we all love production, so we’re able to go a little deeper on some sonic stuff, like incorporating synths and drum machine and electronic production elements.

How did your lyrics and music evolve over the years?

D: It’s hard to say! I think it’s one of those things where you’re so close to something that you don’t notice it changing, even if everybody else does. We’ve tried lots of different approaches to writing, sometimes one of us writes an entire song, sometimes all three of us write together, or we’ve also brought co-writers from outside of the band into the mix. It’s fun to switch it up, and it always results in different types of songs.

Was it therapeutic writing tracks for your 2020 EP ‘Songs To Break Up To’?

KHALID: Definitely. Sometimes I’m not the best at talking about something that’s bothering me. It’s something I’m working on. But when you’re writing songs, especially with other people, you kind of have to talk about it. You know, for work purposes. So having that dialogue and actively chasing your deeper feelings definitely feels like a form of therapy. And then to perform and sing them, it feels good. It’s like doing little exercises for your emotions, it can be tiresome or painful but you feel a big relief after.

Could you elaborate on the inspiration behind ‘Bedrock’?

K: This song is about depression. This came out of a time when we were in LA for a few months, working on this past record. I think I felt pretty isolated, and just tired. The idea I kept coming back to was just feeling like you had emptied the tank. That every time you feel like you catch a break you get knocked down again. Having these dark feelings in Los Angeles is a weird experience, because everything is sunny and fun and beautiful. It makes you feel kind of guilty for feeling anything less than incredible. But musically for that one we were able to do something that turned out fun and celebratory, which was kind of cathartic to take those dark emotions and proudly wave them around. It’s identifying and accepting something negative and there’s a real freedom in that.

Was there a specific song/lyric that you felt overwhelmed releasing?

K: What comes to mind is “Safe Flight”, the last song of the record. It’s meant to be the final goodbye to somebody, the last song of the break up story. I remember writing it with Dev on our back porch in LA and feeling an intense sense of relief and emotion, especially in the last section. It felt uncomfortably frank and honest to me. Those kinds of things can hurt to write but it feels like you’re unloading something you need to.

If it ain’t a straight line

We’re playing for the same side

Hope you have a safe flight

If we’re gonna go there

I don’t even know where

Babe you were the best one

And I can catch the next one.

What are your favourite break up songs of all time?

K: “I Can’t Make You Love Me” by Bonnie Raitt has to be one of the greatest songs of all time. Absolutely brutal.

The first Bon Iver record is filled with heartbreakers. The title track “For Emma” and “Flume” especially, holy moly.

Honourable mention to “Marvins Room” by the king of Toronto (Drake).

What is your guys’ advice for anyone going through depression?

D: For me, it’s helpful to remind myself that when I’ve felt really low in the past, it always swings back the other way eventually. Sometimes accepting periods of depression is all you can do, and naming the beast is the best way to beat it. Also, make sure to get outside, walk, drink water, and be patient with yourself.

It’s not long until ‘Sidelines’ is out, how are you feeling?

D: I feel really excited. We kind of took the long way around to make this record, because of pandemic related hurdles, and a busy pre-pandemic touring schedule. Sometimes I still can’t believe we finished it. I’m genuinely proud of it and believe in it, so I don’t feel as nervous as usual. I’m just ready to surrender it and hope that it resonates with people.

What would you say is the most prevailing theme on your sophomore album ‘Sidelines’?

D: Perspective. A lot of the songs talk about nostalgia and wanting to be back in a certain time or place. We called it Sidelines because it feels like a lot of it is written from an observational place – some may call it a quarter life crisis.

Could you talk us through your experience with navigating your twenties?

D: When we finished college and started the band, we lost all the structure that we had gotten used to from being in school. We had to figure out everything on our own without a blueprint to follow. A music career can be tough to navigate because there are so many different definitions of “success”, and there’s no straightforward path to get there. It can all feel overwhelming. We’re still learning every day and trying to figure it all out, but one big realization I’ve had is that growing up isn’t feeling like you have a handle on everything. I always thought I’d turn 25 and have my shit together. Really, “growing up” is just being able to accept that life is full of uncertainty and being able to roll with the punches while prioritizing your happiness.

What is it about post college period that no-one warns you about?

D: Oops I kind of answered this I guess, but I want to back-pedal a bit. As overwhelming as the post-college period can be, it’s also amazing. It’s freedom. For the first time, you can take agency over your life and decide how you want to fit into society. We’re so lucky to be able to make music and tour for a living. I wish I saw it that way a few years back, because at the time I remember feeling like “uh oh, what now…”. My tip for anyone reading this who is currently in that stage would be to take it slow, allow yourself a grace period to try things and find what you like and who you are. You always have more time than you think.

What can people expect from your upcoming live shows?

D: Lots of new songs. Lots of oldies too. I’m excited for everyone to see the new merch!