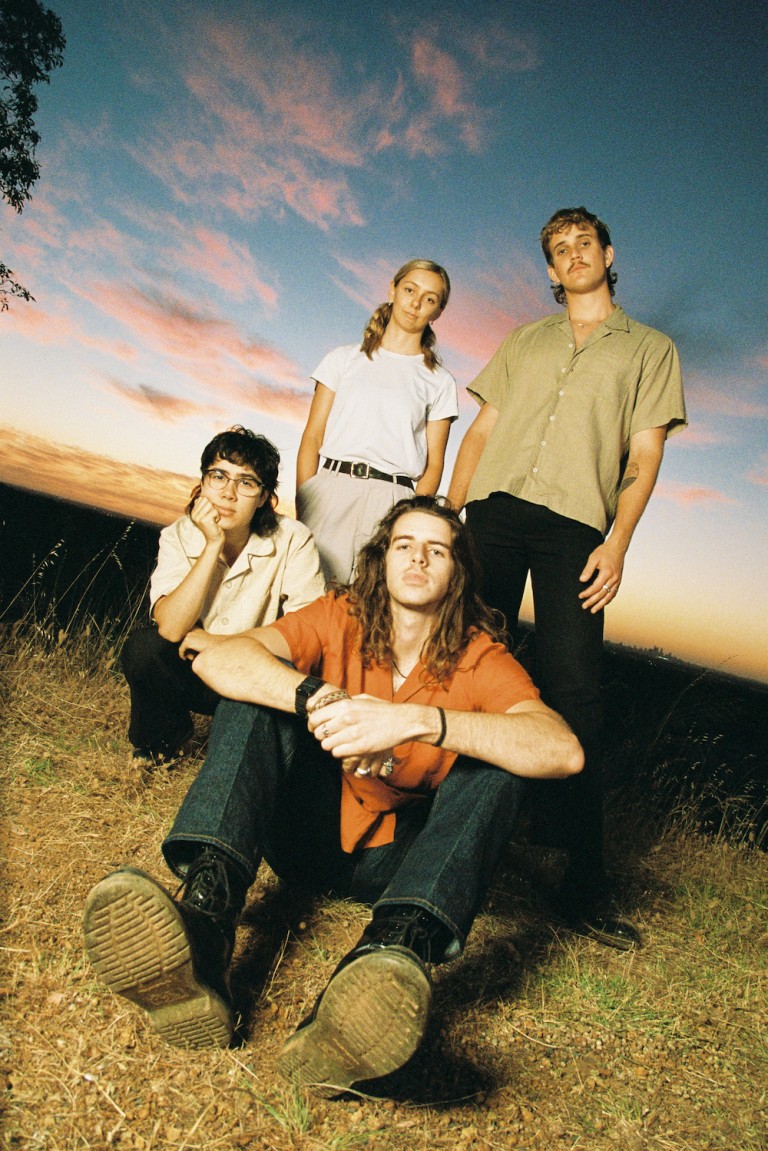 In Conversation With Spacey Jane

Not too long ago, Australian indie rock band Spacey Jane embodied a musical ray of sunshine for those stuck in continuous lockdowns. The Fremantle-based formation went ahead with the release of its debut album, ‘Sunlight,’ in the wake of pandemic-induced postponing in June 2020.

Vocalist and guitarist Caleb Harper admits that putting out an album during a lockdown worked in their favor. Soundtracking the nationwide isolation, Spacey Jane found themselves achieving milestones alongside the greats. Their mega-hit ‘Booster Seat’ came in at #2 on Triple J’s coveted Hottest 100 list and also picked up the Song Of The Year award at the 2021 ARIAs.

Only a week before sharing the follow-up project ‘Here Comes Everybody,’ Caleb Harper catches up with Noctis before he heads off back home to Perth after six months. Released on June 24th, ‘Here Comes Everybody’ will extend Spacey Jane’s discography of sun-kissed instrumentations and introspective lyricism.

With breakout singles ‘Lots Of Nothing,’ ‘Hardlight,’ ‘It’s Been A Long Day,’ Spacey Jane’s highly anticipated new record looks beyond the horizon and is aimed “for youth persevering and thriving emotionally under the weight of our generational burden.”

What have you been up to in the last couple of weeks?
Hanging out in LA and Nashville, writing lots of songs and getting a feel for the place.

How was your London show?
Amazing!  Really my favourite show of the EU/UK tour, we’re so, so grateful to have such amazing fans on the other side of the world.

Was this your first time touring in Europe, if yes how was it to see so many fans overseas singing along to your lyrics?
Yep it was and yes it was really incredible.  Even in this age where you access to so many stats about where our fans are and how many of them exist etc. it’s not until you’re face to face with them at a show that really get a sense of how amazing music is. We all feel very lucky.

How was Spacey Jane formed and how did you come up with the stage name?
Kieran and I had a band together in high school and when we moved to Perth we kept jamming and looking out for people to play with.  We met Ashton and Meils (our first bassist) through friends and university and never looked back really!  When Meils left to finish her medical degree, we found Peppa through a mutual friend and she fit in perfectly!

Well, there’s some contention about the exact origins of the name but to keep it simple, we were all out one night with our friend Jane and sommmmmmmmehow we got Spacey Jane out of that…

Before the first studio sessions, what kind of music did you want to make and what did you want it to represent?
I don’t think we ever had a certain sound or style we were going for, and in some ways that hasn’t changed a great deal.  We just loved making music and playing together and have always tried to make the best, most interesting sounds we can with the abilities we have.  Lyrically my goal has always been to look out to things I see and look into things I feel, and talk through them as honestly as I can.

You released your debut album ‘Sunlight’ when most of the world was in isolation due to the pandemic, how was it releasing your big debut during such unprecedented times?
There was a great deal of anxiety and uncertainty leading up to the release, a lot of artists and their teams were pausing their releases indefinitely and the whole touring industry came to a grinding halt.  We thought a lot about doing the same thing but with no end in sight there wasn’t really an obvious date to push back to.  In the end we released it as planned and it sort of found its place in a vacuum of new releases and things to do, I think it almost worked in our favour.

How was your lockdown/pandemic experience?
We were pretty lucky over in West Aus, initially we had 3 or so month lockdown and after that, aside from a handful of short, sharp lockdowns, life was mostly normal for us.  In saying that, the hard border closures that kept WA covid free had the obvious impact of making touring pretty tough so we went through numerous cancellations and postponements that were pretty stressful.

How would you summarise your second album ‘Here Comes Everybody’? What are the main themes?
I tried to approach the writing of this record with a broader perspective, I think Sunlight was unapologetically inward looking and described specific settings and experiences I’d been in. HCE has stories and places that I imagined I could have been in in the past and draws on the experiences and stories of people around me from that time in their lives. It talks a lot about being ok with feeling like shit and how just because you’re told that early adulthood is supposed to be the greatest time of life that doesn’t mean it is…

What are the suggested listening tips, alone in the room, driving through countryside?
Best way to listen to the new album?  Honestly, however you want to. If we’ve made an album that you can listen to during dinner, alone in the car, at the beach with friends etc. etc., then I think we’ve done a good job.  People take vastly different personal things away from our music and I like that.

You’ve also experimented with new sounds, what is your favourite instrumentation out of the album if you can choose one?
I think the outro from “It’s Been a Long Day” takes the cake for me.  We spent a lot time building up that soundscape and there are stems and stems full of weird rhythms and ambience and I love how it turned out.

You’ve recorded the album in several places, could you name them and how do you think the environment affected the music at all?
We spent a week in tracking demos and jamming the songs in the southwest of WA, that was a sort of band bootcamp that helped shape a more singular shared vision for the band.  The recording itself happened between Blackbird studios in Perth (where we recorded Sunlight) and Empire Studios in Brisbane.  I’d say the tracking we did at Blackbird probably lent more into a well-known Spacey sound because we were comfortable in that environment and have a sort of pattern that we can follow.  The tracking in Brisbane took us out of our comfort zone a little.  I spent a lot more time at the console with our producer working through the bottomless pit of digital synth/pad sounds and samples.  That process was really good for really understanding and refining the mood of the songs.

What is the inspiration behind the first single ‘Lots Of Nothing’?
This song is about a version/part of myself I don’t want to know or see but I have to admit still exists.  The verses are a nightmarish vision of a couple driving together, having lunch etc, kind of Natural Born Killers vibe.

My personal favourite ‘Not What You Paid For’, what is the backstory of this track?

It’s about an 18 yo being a little shit, trying to milk every last bit out of feeling like you don’t have any responsibilities and realising that that’s actually not that great a way of living.

What are some of your favourite themes you touched upon, lines you’ve written?

I like the line in “It’s Been a Long Day” in the chorus, “Pulling at the hands that hold you down and lift you away”.  It’s the idea of someone doing everything they can to help you, keeping you grounded and saving you from the worst of yourself while you grapple with them, not knowing that you need them.