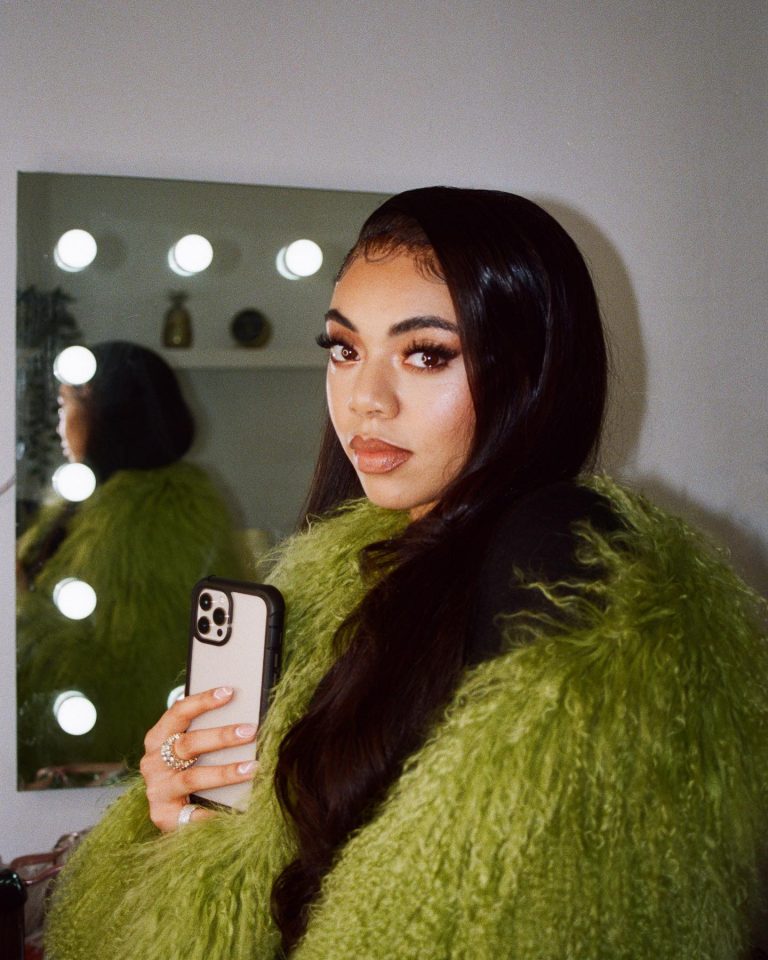 In Full Motion with Jaz Karis

From Katy B sliding into her DM’s, to collaborating with super producer Juls on the song of the summer, South London’s very own Jaz Karis continues to wave the flag for a new generation of soulful music emerging in the UK. Firmly centering herself as one to watch, Jaz’s iconic COLORS SHOW performance gained global recognition and is now sitting pretty on YouTube edging towards an impressive 12 million views. Noted for her captivating earlier projects ‘Petty Lover’, and EP ‘All Eyes On U’, last year saw Jaz break out of her comfort zone with a feature on upbeat Afrohouse track ‘Soweto Blues’ with Juls and Busisiwa. Ever evolving, Jaz continues to develop her sound, now incorporating lively elements of Afrohouse and Amapiano paired with soothing neo-soul vocals on her latest release ‘Motions‘.

Taking it back to ‘Petty Lover’, an absolutely essential Jaz Karis track for those of you unfamiliar, Jaz shares the events that led to it’s creation – “The song was inspired by boyfriend at the time after we had an argument and basically told me to calm down, that made me really angry and before I knew it, I was writing a song called Petty Lover”.

“My past boyfriends will tell you, I literally write about my life, everything you hear is completely from the heart”. Love being the main premise of her music, Jaz Karis is an artist drawn to the concept of love, truly living up to her loyal and emotional star sign, “I’m a hopeless romantic, a Cancer and I believe love can also be interpreted in multiple ways”. As a creative soul, Jaz has always been naturally imaginative, as a child Jaz discovered a talent for storytelling and enjoyed writing books, which then opened up the possibilities of being a songwriter. Jaz explains “Jacqueline Wilson and Enid Blyton were author’s I looked up while growing up, I soon realised whatever career I’d pursue would include me telling stories, being a musician has allowed me to combine both talents.”

Reminiscing about her early days, Jaz shares memories of creativity being a constant theme throughout her young life, beginning with church talent shows – “I was in the choir from a really early age, during this time I was able to channel my abilities as a singer … In secondary school, I was either body popping in my assemblies or playing the piano. I loved dancing, I went to ballet school and loved to tap dance.”

Many years later and after being accepted into the prestigious Brit School, Jaz considered the idea of studying musical theatre before landing on a more practical subject that showcased her talents in singing. However Jaz is a woman of many talented, aside from being a singer-songwriter and piano player – Jaz flexed her skills on the other side of the recording glass, engineering her own music and proving that she can do it all – “I audio engineer myself by recording a lot of my own vocals”.

Like many of us, Jaz credits her first experiences with music to artists and genres played by her parents around the house. Playing everything from R&B and Soul to Soca, stemming from their St Lucian heritage, “Aretha Franklin was an artist who was often played in my household, my Nan and Grandad would constantly play Soul Jazz, I think that’s why I have a lot of soul influence in my music”. With all that soul music woven throughout into her upbringing, it’s no surprise that Jaz’s favourite song of all time is the highly praised jazz classic ‘Ella Fitzgerald – No Regrets’. Cleverly embedded into her stage name, Jaz Karis reveals that her name combines her favourite genre of music with the added personal touch of Karis, the name her mother had originally chosen for her at birth.

Delving into collaborations and musical relationships, Jaz can often be found to be accompanied by super producer Juls. Speaking about their Afrohouse collaboration ‘Soweto Blues’, Jaz shares that although the hit was a massive success, she had initial doubts about going out of her comfort zone with a new sound, “He played me ‘Soweto Blues’ and it almost scared me, as Afrohouse / Amapiano is a genre I’ve never really ventured into, I freestyled on the track, and it just worked”.

Juls’ distinctive production can also be heard on the Reggae infused ‘Let Me Down’, which is the last track off her 2020 EP ‘All Eyes On U’. More recently, Jaz assisted her angelic vocals to ‘Summer in the Ends’, taken off Jul’s debut album ‘Sounds of My World’, which also featured critically acclaimed Spoken word artist, George the Poet.

Sometimes even the best collaborations can take you by surprise, just take the newly released ‘Open Wound’, a soulful single by none other than UK legend Katy B, “Katy B slid into my DM’s, and I honestly thought someone had hacked her account”. In fact, Katy simply stated how much she loved Jaz’s work and before she knew it, Jaz was recording her verse in her home studio. The end result, included on Katy B’s latest EP ‘Peace and Offerings’ is a laidback jazz inspired project in which two singer’s voices are seamlessly blended, and a testament to why everyone should be checking their DM requests. Other artists on Jaz’s radar include impressive talent from across the UK, “At the moment I’m really enjoying Odeal, Kali Claire, Tiana Major 9, Shae Universe and I’ve recently discovered Saint, his track ‘Champagne Shots’, I like that a lot”.

From working alongside the likes of Big Tobz, Juls and Katy B – it is clear Jaz Karis’ range of talents don’t fit neatly into one checkbox, and it’s this very quality which makes Jaz so indisputably unique. “The UK loves to box singers into the R&B category, but I’ve never officially called myself an R&B singer and don’t want to restrict myself to just one genre of music. I’m about music that makes you feel something, but if I was to categorise myself, I’d definitely say my music falls into the genre of soul”.

It’s always refreshing to see newer artists that have a strong sense of clarity about the direction of their sound and career. Asking Jaz about some of her highlights and proudest moments, she simply states “Seeing my streams increase, performing in Japan, and seeing my face on a billboard, these would definitely be some of my proudest moments”.

With an abundance of EP’s, fans should be patient while awaiting Jaz Karis’ debut album “To me, albums are so special and I don’t think they are something you can rush”, her anticipated debut album is something Jaz wants to take her time with, however, we can all look forward to one more project in early 2022. “I have another track coming out very soon, hopefully another visual and I have a few live shows that are yet to be announced.” For now, we’ll be singing along to Jaz’s most recent single and accompanying visuals for ‘Motions’. Along with some others, you’ll be able to see Jaz perform this track live on tour with singer-songwriter Raye.